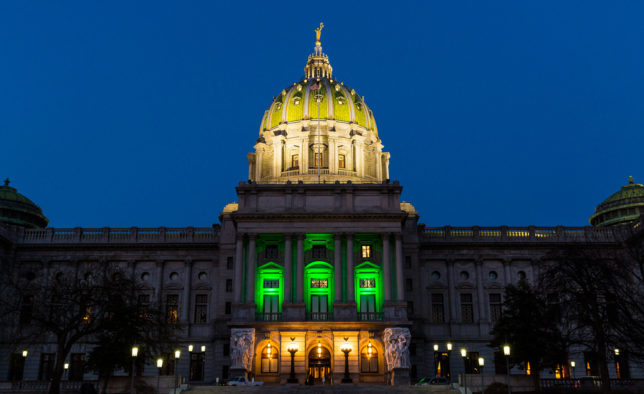 Democrats and their high-powered lawyers are quietly moving special interest groups around a judicial chess board, hoping to position judges and politicians so that they will be in power to redraw the maps when the United States undertakes its decennial redistricting in two years.

It’s  a subtler and deeper game that is hiding underneath weekly social media outrages. While Americans are distracted by the  latest tweets from President Trump or Representative Ocasio-Cortez, special interest groups are getting in formation, leveraging their constituencies to literally redraw American politics.

Left-wing pillars like the American Civil Liberties Union, the League of Women Voters (LWV), People for the American Way, and various labor unions have marshalled their shrillest activists and shrewdest strategists to aid Eric Holder, Barack Obama, and the National Democratic Redistricting Committee in their quest to “end gerrymandering.”

Nowhere is this more apparent than in Pennsylvania.

Women Before the Courts

The League of Women Voters PA gave redistricting special treatment, however. It launched Fair Districts PA in March 2016. This project of LWV focuses exclusively on redistricting by amending the state constitution to create an independent redistricting commission to draw the map. In the short-term however, the League sued the state of Pennsylvania in June 2017.

It worked; the League of Women Voters PA won the case and the state supreme court threw out the 2011 map. But the state needed a new map. After back-and-forth between Democratic Governor Tom Wolf and the Republican-controlled state legislature, the state supreme court appointed a “special master” to redraw the map just in time for the 2018 mid-term elections. The “fair” map cost Republicans four seats in Pennsylvania, helping give Democrats the majority in the U.S. House of Representatives.

The National Democratic Redistricting Committee touts this series of lawsuits as a success, even though it wrongly empowers the judiciary to do the job delegated specifically to elected officials. Of course, this unorthodox judicial decision wasn’t without controversy of its own.

Before the League of Women Voters even filed its suit, another Democratic interest in Pennsylvania was laying the groundwork for left-leaning interests to pack the courts and influence the outcome of critical litigation.

In 2015, Pennsylvania held elections to fill three out of the seven seats on the state’s supreme court. As Pennsylvania is one of only eight states that hold partisan elections for the high court, there were both Democrat and Republican judges on the ballot. All three Democratic candidates won their elections, tilting the state’s highest court to the left with a majority of Democratic justices.

Overall, the IBEW and Local 98 spent over $1.5 million on the Supreme Court race. Of course, John Dougherty’s influence also encouraged other labor interests to participate in the election. According to the National Institute on Money in State Politics, labor unions spent nearly $4 million on the race in favor of the Democratic candidates. Labor’s judicial war chest in the race helped the victorious Democrats far outstrip their rivals in campaign funding.

Earlier this month, though, the Pennsylvania labor gravy train encountered some difficulty. Authorities arrested Johnny Doc for embezzling, bribery, and theft of over $600,000. The Democrats likely will miss his high-level strategies, and some think his arrest will keep the swing state in play for Republicans in 2020.

But Johnny Doc’s generous and allegedly corrupt political machine isn’t the only cloud over the state’s redistricting decision. Justices Wecht and Donohue also compromised the integrity of the court and the state Supreme Court’s decision in League of Women Voters v. Commonwealth of Pennsylvania. Justice David Wecht made several statements while presiding over the case and while campaigning for his seat in 2015, which lawyers for Pennsylvania Republicans say should have caused Wecht to recuse himself.

At a May 2015 Neighborhood Networks PA Supreme Court Forum, Wecht said: “Let me be very clear: Gerrymandering is an absolute abomination. It is a travesty. It is deeply wrong . . . . Districts have been drawn by skilled political operatives, and it needs to stop.”

Wecht also told the editorial board of Lancaster Online, “In 2014, I believe, there were at least more than 200,000 votes for Democratic candidates for U.S. Congress than Republicans and yet we elected 13 Republicans and 5 Democrats, and there are more than 1,000,000 more Democrats. You cannot explain this without partisan gerrymandering.”

What’s worse, he delivered remarks to the Pennsylvania League of Women Voters on gerrymandering right before the 2015 election. He told the plaintiffs in the redistricting case he later decided that, “Everybody in this room should be angry about how gerrymandered we are . . . Your power is taken away from you.”

While speaking at the same forum, Justice Donohue also promised that “gerrymandering will come to an end” if she and her fellow Democrats won the election.

Pennsylvania State Senate President Pro Tempore Sen. Joe Scarnati (PA-25) filed a petition that Wecht be disqualified from hearing redistricting cases, that Donohue fully disclose all of her public statements about “gerrymandering,” and that the state supreme court’s decision and actions related to the case be vacated.

Because Republicans in Pennsylvania didn’t discover this obvious bias before the court made its decision, the decision was ultimately upheld. However, this sad case reveals the concerted effort the unions, the LWV PA, and their allies at Fair Districts PA made to throw out one “gerrymander” only to institute another—one that conveniently favors its own party. The lesson for other states facing redistricting issues is to follow the money and influence of the state’s special interests. Underneath outrage inducing stories highlighting identity politics, the Left’s special interests are aligned with one goal in mind: capturing political power.