Out of Darkness, Cash: A Consultancy Hides “Dark Money” 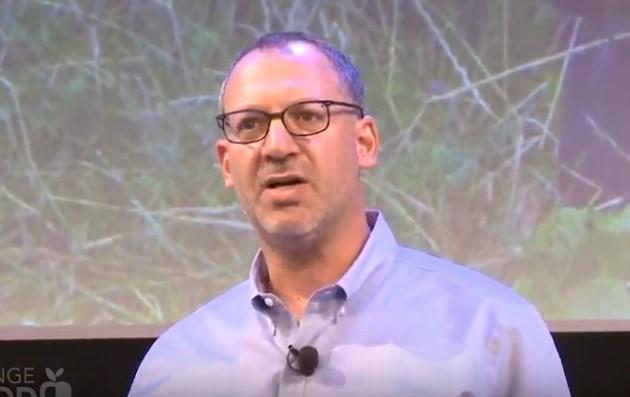 Arabella Advisors is the brainchild of Democratic Party operative Eric Kessler, who first conceived of the company in 2005 after serving as a special assistant in the Clinton administration to then-Interior Secretary Bruce Babbitt. Credit: Change Food. License: https://goo.gl/KQGSLg.
by Hayden Ludwig

If there’s one game the professional Left is good at playing, it’s fake “grassroots” activism. Nonpartisan, supposedly neutral groups with provocative names seem to pop up almost every week “demanding” this and “protesting” that—and always against conservatives and libertarians.

After President Trump successfully passed a Republican tax reform bill in 2017 and ended Obamacare’s individual mandate to buy health insurance, left-wing protesters rushed to save the dying healthcare bill, creating groups designed to look like they’re run by citizen activists. But the network those activists built is housed in one of Washington’s best-kept funding secrets: the Sixteen Thirty Fund, a “dark money” mega-funder run by a philanthropy consulting firm, Arabella Advisors.

The Geppetto of Washington

The Sixteen Thirty Fund is essentially a subsidiary of Arabella Advisors, a Washington, D.C.-based firm and a veritable Geppetto, the fictional woodcarver and puppeteer whose creation, Pinocchio, involves him in all sorts of mischief. Besides offering consulting services to wealthy left-leaning clients, Arabella provides a unique service to the professional Left through four major nonprofits.

Of these four nonprofits, the Arabella-run advocacy group—the Sixteen Thirty Fund—might be called the darkest of “dark money” nonprofits.

Because the Sixteen Thirty Fund is an IRS-designated 501(c)(4) nonprofit, it may spend more money on lobbying than its 501(c)(3) counterparts and it isn’t required to disclose its donors. To this end, Sixteen Thirty caters to wealthy Democratic Party donors, funneling tens of millions of dollars in grants to left-wing nonprofits, providing services to create new “pop-up” groups intent on lobbying Congress and influencing the news cycle.

The Fund works in the shadows, aiding the professional Left and raking in millions of dollars each year in virtual anonymity. Even as the Sixteen Thirty Fund garners little attention, though, it advances its agenda through high-profile “pop-up” campaigns. It is this obscurity combined with an impressive portfolio of fiscally sponsored projects that allows the Sixteen Thirty Fund to operate as one of the leading—and least-visible—“dark money” funders on the Left.

While that term is poorly defined, “dark money” is best applied to 501(c)(4) nonprofits like the Sixteen Thirty Fund, whose donors are virtually impossible to identify and may include foundations and individual donors alike. Using financial vehicles that obscure funding sources is often denigrated by leftists like the New Yorker’s Jane Meyer, who accuse conservatives and libertarians like Charles Koch of “weaponiz[ing] philanthropy” and corrupting elections with their nonprofits, conveniently ignoring money spent by left-wing funders like the Sixteen Thirty Fund.

Arabella is the brainchild of Democratic Party operative Eric Kessler, who first conceived of the company in 2005 after serving as a special assistant in the Clinton administration to then-Interior Secretary Bruce Babbitt. Kessler is also tied directly to the Clintons, serving as a member of the now-defunct Clinton Global Initiative. Prior to that, Kessler was an environmental activist for the League of Conservation Voters, where he worked as national field director.

Eric Kessler comes from a wealthy Chicago family whose fortune originated with the 1998 sale of Fel-Pro, their auto-parts manufacturer and “fifth-generation family-owned business,” for a reported $750 million. He’s a board member of the Family Alliance Foundation, his family’s grantmaking nonprofit, which largely funds medical causes. The foundation also funds the World Resources Institute, an environmentalist nonprofit created with startup capital from the MacArthur Foundation that has hailed an extreme carbon tax proposal as “good starting point” for “cut[ting] emissions in line with the goals of the Paris agreement.”

Kessler co-owns three ritzy restaurants in the District of Columbia, one of which, Graffiato, closed in July 2018 following a sexual harassment settlement against co-owner and chef Mike Isabella. He’s also active on many boards, including the Chefs Action Network, the Washington Regional Association of Grantmakers, and the James Beard Foundation, which promotes liberal education and healthcare policies under the guise of “good food for good.”

Arabella Advisors has grown significantly since its 2005 founding. Today, it’s the largest philanthropy consulting firm in the country, servicing major clients like the Bill and Melinda Gates Foundation. From its Washington, D.C., headquarters, Arabella Advisors pulls the strings of the Sixteen Thirty Fund, a 501(c)(4) funding and fiscal sponsorship nonprofit, along with three 501(c)(3) “sister” nonprofits. “Simply put,” Arabella Advisors wrote in 2015, “to effect change, more philanthropists need to advocate.” That’s a good summary of the company’s services, which revolve around what it terms the “strategic incubation” of new leftist groups.

Arabella couches most everything it does in philanthropic terms, but its “philanthropy” looks strikingly like the kind of political activism advanced by Democratic mega-funders like George Soros and Tom Steyer.

It’s impossible to grasp the work of the Sixteen Thirty Fund and its affiliates without illustrating their connection to Arabella Advisors. Unlike most large funders on the Left (such as the Tides Foundation and NEO Philanthropy, both of which offer incubation services), the four Funds operate as virtual subsidiaries of Arabella Advisors. The firm itself makes clear to prospective clients that it manages these “four nonprofit entities . . . that serve as incubators and accelerators for a range of philanthropy initiatives.” When you sign up for Arabella’s fiscal sponsorship services, in other words, you’re signing up to work with one or more of these Funds.

The Sixteen Thirty Fund has grown rapidly since it was founded in 2009, and earned $21.2 million in 2016, according to its latest IRS filing. Much of that money has gone to aid Democrats. In the 2018 midterm election, the Sixteen Thirty Fund spent $724,000 supporting Democrats and attacking Republicans, according to the Center for Responsive Politics. And in 2016, the Sixteen Thirty Fund paid out nearly $15 million in grants to a bevy of left-wing lobbying or political groups: the Democratic Party’s House Majority PAC, environmentalist League of Conservation Voters, David Brock’s Media Matters Action Network, Norman Lear’s agitation group People for the American Way, the Center for American Progress Action Fund, and its own affiliated New Venture Fund.

Even the Sixteen Thirty Fund’s name is mysterious. While neither Arabella nor Sixteen Thirty seem to disclose their “nominal” origins, it’s plausible that both names have unlikely historical roots: the Puritans of the 17th century. In April 1630, John Winthrop, founder of Boston and leader of the second wave of Reformed émigrés to flee episcopal England, delivered his famous sermon, “A Modell of Christian Charity,” in which he expounded upon Matthew 5:14, reminding his flock “that we shall be as a city upon a hill.” Winthrop and his followers then crowded aboard 11 ships—their flagship the Arbella or Arabella.

In the next installment of Out of Darkness, Cash, learn about the unique advantage the Sixteen Thirty Fund offers to anonymous donors on the Left.