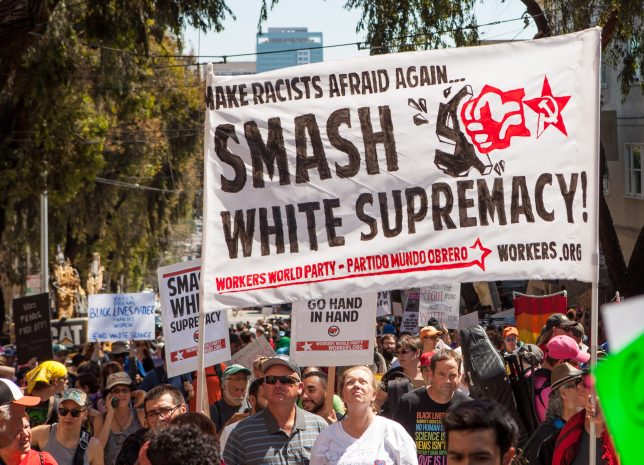 Portland, Oregon, is maintaining its reputation as the most active hotspot in the nation for organized Antifa violence.

Members of the group known as Rose City Antifa physically attacked members of the conservative group Patriot Prayer the afternoon of June 3, in central Portland. Patriot Prayer, which has also been confronted by Antifa during rallies in California, had organized a public event to say goodbye to a member who was moving back to American Samoa.

Rose City Antifa, alerted its supporters in a May 24 blog post of the June 3 rally. The post, which was also signed by two groups called the Pacific Northwest Anti-Fascist Workers Collective and Eugene Antifa, stated ominously:

Joey Gibson and Patriot Prayer have short memories, but our community does not. Rose City Antifa knows now, just as we did last year: Gibson is a magnet for violent white supremacists and bigots. The time between then and now has only reinforced our resolve, and the evidence of Patriot Prayer’s racist ties has accumulated to undeniable quantities.

We will not allow racists and fascists to parade through Portland’s streets, threatening activists and targeting at-risk communities. No matter how many times they try to sneak back in, this city will stand united against them. We ask the community to join us at 4:00 pm on June 3rd in Terry Schrunk Plaza, to show Patriot Prayer, just as we showed them last year, that their violence and hatred has no place in Portland.

In other words, Antifa believes it has the right to police Portland for any sign of white supremacists and fascists. The problem is, the communists and anarchists of Antifa, who openly reject the First Amendment, promiscuously label many people and groups they consider enemies as “fascists.”

Patriot Prayer is a Tea Party-ish group that has been targeted and attacked relentlessly by Antifa and its allies in the mainstream media as a haven for neo-Nazis, white-supremacists, and fascists without a shred of evidence.

Joey Gibson, an American citizen of Japanese ancestry, started Patriot Prayer after several supporters of President Trump were beaten in San Jose, California, on the campaign trail. He has said one of his top goals is to “liberate the conservatives on the West Coast,” and that he wants to educate Antifa supporters and “bring them out of the darkness.”

Of course, the extent to which Antifa members are educable is an open question.

That Gibson, who isn’t Caucasian – he describes himself as “brown” – is some kind of white supremacist, is a challenging case to make. He has forcefully denounced white supremacists and racists in general and reportedly makes a good faith effort to keep extremists from attending his group’s gatherings At a Patriot Prayer event in 2017, Gibson took to the stage to shout, “F*#k white supremacists! F*#k neo-Nazis!”

While Patriot Prayer is strongly pro-Trump, the group’s rhetoric is generally conciliatory. Its Facebook page states the group “is about using the power of love and prayer to fight the corruption both in the government and citizen levels that seek to gain power through division and deception.”

Gibson urges those on the political left to “speak out against these hate groups. Antifa doesn’t even care about fighting ‘racists.’ They want to fight the republic as a whole.”

Especially since Donald Trump became president, the Left, including Antifa, has been deliberately conflating peaceful, pro-Constitution conservative and Tea Party groups with violent neo-Nazis and their allies.

Rose City Antifa organized competing rallies for the vicinity June 3, which it promoted as a “Call to Resist Patriot Prayer Bringing Nazis to Portland,” and as an “Anti Police Brutality Solidarity Rally.”

According to KOMO News, during the rally clashes:

-36-year-old Jonathan D. Feit was arrested near Southwest 2nd Avenue and Southwest Columbia Street on charges of Disorderly Conduct in the Second Degree

-32-year-old Andrew Arbow was arrested at Terry Schrunk Plaza on charges of Disorderly Conduct in the Second Degree.

-43-year-old Gregory N. Isaacson was detained at Terry Schrunk Plaza, cited and released for Failure to Comply with a Lawful Order.

-26-year-old Bryan A. Neyman was arrested on four counts of fourth-degree assault and one count of third-degree robbery.

The clash between the two groups came a year after Patriot Prayer organized a June 4, 2017 “Trump Free Speech Rally” in downtown Portland. As that rally was wrapping up, “police moved into Chapman Square, where a majority of the counter-protesters had been gathered. Police used flash-bang grenades, pepper balls, and other crowd control tactics to clear the park after reporting that some people in the group were throwing things at officers. Police later said they seized several ‘weapons’ like sticks and projectiles.”

Rose City Antifa was founded in 2007, according to a Politico profile last year.

For much of its existence, the group largely relied on shout-downs and public displays of force as their primary tactics. Recently they’ve added the cyber weapon of doxxing—exposing personal information such as addresses, places of employment, and dates of birth and schools, even if it means innocent families mistakenly targeted by antifa begin receiving threats. Such tactics have been “effective because they raise the cost of participation,” Stanislav Vysotsky, who researches political extremism with the University of Wisconsin-Whitewater, told POLITICO Magazine.

The Rose City Antifa group doesn’t care if innocent people get caught in the crossfire or if constitutional rights are trampled in the process.