The film by Adam Carolla and Dennis Prager, which looks at First Amendment rights in America, was picked up for release by Atlas Distribution. 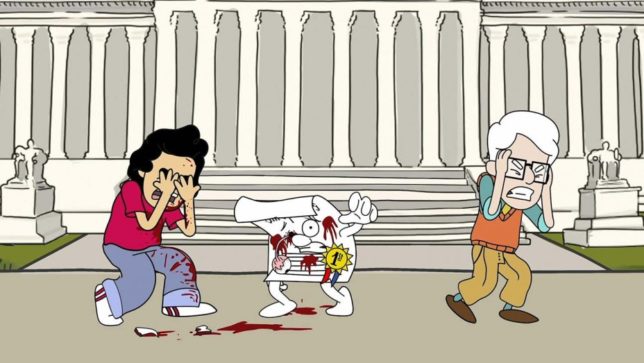 This article originally appeared in the Hollywood Reporter on September 4, 2019.

No Safe Spaces, a documentary movie the filmmakers say is about “how First Amendment rights are being eroded in America,” struck an Oct. 25 release deal with Atlas Distribution amid a controversy surrounding the feature’s PG-13 rating.

The movie stars comedian-podcaster Adam Carolla and radio talk-show host Dennis Prager, the latter of whom sent a letter to the MPAA to protest the rating, which is largely based on a 30-second animated clip of “Firsty,” a walking, talking embodiment of free speech who gets shot up with bullet holes.

“Any kid who sees it will probably laugh,” Prager wrote in his letter to MPAA head Charles Rivkin. Prager also notes that Firsty isn’t killed, and he says that he seeks “with all of my work to make content that is suitable for all ages,” though he worries the more restrictive rating will discourage some parents from taking their children to see the movie.

Much of the movie takes place at colleges where protesters railing against invited conservative speakers like Ben Shapiro and Ann Coulter use profanity in their language and on their homemade protest signs, though the cursing has been blurred and bleeped in an effort to obtain a PG rating, says Prager.

“But when it comes to Firsty, we would ask that you reconsider and allow the scene to remain and still achieve a PG rating so that we can reach the widest possible audience. A PG-13 rating would not reinforce people’s faith in MPAA’s ratings,” Prager wrote in his letter to Rivkin, obtained by The Hollywood Reporter.

The MPAA’s ratings board is made up of nine adults, all of whom are parents, who live in various parts of the U.S. and reflect “the diversity of American parents,” according to its website.

“Under the Classification and Rating Administration rules, the rating board maintains confidentiality and does not comment publicly about the details of the rating process for a particular film,” an MPAA spokesperson told THR. “The submitter of any film who objects to the given rating can choose to go to the appeals board. Non-MPAA member companies can choose to distribute their films unrated.”

Insiders say the MPAA called the scene where Firsty is shot up “way too strong and violent” for a PG rating.

The movie will be released in a few theaters initially then get a nationwide release via Atlas Distribution, which last distributed Absolutely Anything, the final film featuring Robin Williams, and Charlie Sheen’s movie, 9/11. Atlas Distribution was formed in 2014 by Harmon Kaslow and John Aglialoro, the filmmakers behind a trio of movies based on Ayn Rand’s 1957 novel, Atlas Shrugged.