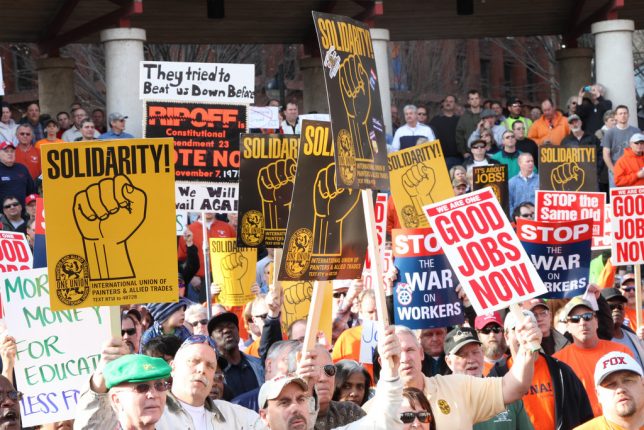 In the US Supreme Court’s late-June Janus v. American Federation of State, County, and Municipal Employees (AFSCME) decision, the Court held, 5-4, that AFSCME violated the First Amendment by compelling public-sector nonmembers to pay “agency fees” for representation to which they did not consent. It effectively made the country’s entire public sector “right-to-work” (RTW).  RTW laws bar contracts between employers and unions that require every employee in a bargaining unit to pay fees to the union. Janus was a long-sought victory for employee rights and loss for Big Labor.

On August 7, in the wake of Janus, Missouri voters lopsidedly rejected Proposition A—which would have made it the 28th RTW state—by 67.5 percent to 32.5 percent. It was a major victory for Big Labor and loss for employee rights. True, the public-sector employees are now protected by the Supreme Court’s ruling in Janus, but employees in the private sector have yet to have their rights restored.

What to make of these two results? First, the unions’ Prop. A victory likely is a little bit of a “trailing indicator.” The effects of Janus were not yet fully in effect during the campaign leading up to the ballot initiative; much of the reported $15 million in spending that Big Labor devoted to the campaign was probably compelled to be paid by employees around the country before Janus and its implementation. Big Labor won’t have such an advantage again.

Second, however, Prop. A’s result underscores the need to patiently consolidate major legal victories, like Janus—both for those organizations and individuals who fought for them (either in court or in the court of public opinion) and those who fund those groups and people. Legal victories require consolidation; wins have more staying power when the rationale behind the decision is reinforced in other legal, administrative, legislative, outright political, or even plain old policy-implementation contexts (or combinations thereof).

For those who like a particular ruling or precedent, it needs to be preserved, protected, respected, and implemented, and usually, at least some want it expanded; this all requires further follow-up activity in one or more of those contexts (read: further funding). Historically, this consolidation and reinforcement of ideas supported the landmark decisions in Brown v. Board of Education, Roe v. Wade, Zelman v. Simmons-Harris, Burwell v. Hobby Lobby, and Obergefell v. Hodges, among others. It is demonstrably already the case with Janus, as well.

Administrative, legislative, political, and policy-implementation victories may all similarly require consolidation in the other contexts, too.

It would be folly to think that the fight against Big Labor ended with Janus. Recall George Shultz’s general lament: “Nothing ever gets settled ….” And then, of course, there’s the deservedly classic “won the war, lost the peace” trope.

Most organizations involved in public policy or policy-oriented legal activity acutely understand the need for this consolidation. Many face challenges in convincing funders to continue fighting the good fight. There’s been such a major victory, after all—“we won!”—and there are always other needs totally unrelated to the big win.

With a longer-term worldview, though, funders committed to a cause should have a deep appreciation for these needs. Now isn’t the time for policy groups or their donors to rest on their laurels.