McCabe, McAuliffe, and the Company You Keep 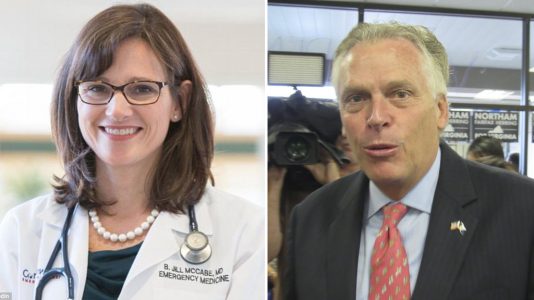 This article originally appeared in American Greatness on May 4, 2018.

Dime con quién andas, y te diré quién eres, Mexicans say. Tell me who you walk with, and I’ll tell you who you are.

That’s why it’s significant that Terry McAuliffe, one of Bill and Hillary Clinton’s top lieutenants, funneled more than $675,000 into the campaign of Dr. Jill McCabe, whose husband Andrew would later become deputy director of the FBI.

McAuliffe’s been tied to scandal after scandal: China’s meddling in the 1996 election, with contributions laundered through a Buddhist temple; the sale by a top Democratic donor of missile technology to the Chinese; McAuliffe’s own “green” vehicle company, taxpayer-subsidized and now bankrupt, which sold visas to (again!) the Chinese; and illegal funding of the Teamsters’ union president’s reelection campaign.

Nobody honest chooses to get involved with Terry McAuliffe.

Which brings us to Andrew McCabe, the recently fired Deputy Director of the FBI, and his wife, Dr. Jill McCabe.

In a recent article, Dr. McCabe, a physician, explained how she came to run for office: “One day in 2014, an entourage of politicians came through the ER, and a reporter pulled me aside to ask how Medicaid expansion would affect my patients. I did not think any more of it until a year later when I received a voicemail asking whether I might be interested in running for the state Senate. I was stunned — I went home and told Andrew, and we laughed about how crazy that idea was.” The lieutenant governor’s office called, urging her to get in.

Then, as noted by The Bull Elephant, a blog about Virginia politics, “Team Clinton strong-armed the local unit of the Democratic Party into giving the nomination to McCabe, a complete newcomer to politics who was an unknown in local Democratic circles, and whose previous political participation had reportedly included voting in the 2012 Republican primary. This effort came at the expense of the principal existing candidate for that office, a well known Democratic activist who was a retired Army colonel and respected local attorney who had been recruited by the local party to run.” Control of the state senate was at stake—Republicans held a 21-19 edge—yet McAuliffe forced local Democrats to run a novice plucked seemingly out of nowhere. At the time, it was inexplicable.

On March 7, 2015—just five days after America learned about Hillary’s server—the McCabes met with McAuliffe. On March 9, Dr. McCabe’s opponent suddenly dropped out. On social media, he referred bitterly to “the smoldering ashes of my nascent Virginia Senate campaign.”

McAuliffe’s Common Good VA Political Action Committee eventually gave the McCabe campaign $467,500, the third-highest contribution among the 37 it made to legislative races that cycle. Counting money from the state Democratic Party, McCabe’s campaign got a total of $675,288 from funds controlled by McAuliffe.

Dr. McCabe lost by five points, which was lamented by Peter Strzok and Lisa Page, FBI agents who were having an affair and would become members of the Mueller impeachment team. Explaining the defeat, Strzok texted Page that the area “is being gentrified, but it’s still largely ignorant hillbillys [sic].”

FactCheck.org, PolitiFact, CNN, the Associated Press, and other news organizations have assured us that, given the sequence of events, there’s no chance anything is amiss. “By the time McCabe was promoted again—in February this year, to deputy director—and assumed responsibility for the Clinton email investigation, his wife had been out of politics for months,” the Washington Post explained.

In fact, at the time of Jill McCabe’s recruitment, Andrew McCabe was far more than just another FBI agent. He was known to be a frontrunner for the job he eventually got, deputy director.

How do I know?

On September 14, 2014, almost six months before Jill McCabe was recruited, the Post reported: “Newly at the helm of the Washington field office is Andrew G. McCabe, 46, a rising star in the FBI who many bureau officials think will be the next deputy director when Mark F. Giuliano retires.”

Giuliano was born in 1961, joined the Bureau in 1988, and became deputy director in 2013. Based on his age, length of service to the Bureau, and length of time in the DD job, he was well-due for retirement by early 2016.

Thus, at the time of the recruitment of McCabe’s wife and the funding of her campaign, McCabe was on track to soon become the FBI’s No. 3, then its No. 2 man. Terry McAuliffe knew exactly what he was doing, and who he was dealing with.