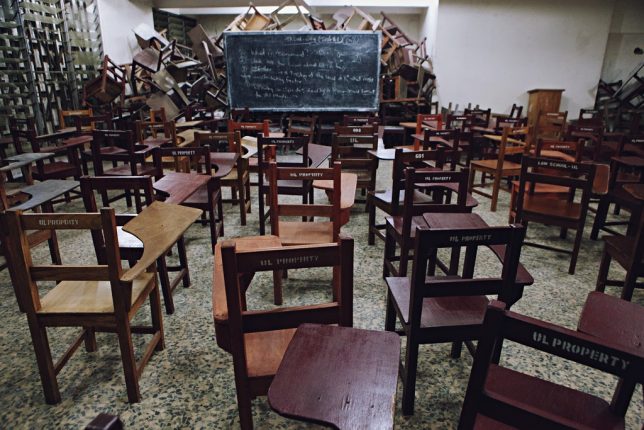 Crossposted from Philanthropy Daily — This article is dated June 7, 2017

These clichés are being put to the test in Liberia. As David Pilling, the Financial Times’s Africa editor, reports, Liberia is trying to solve perennial education problems by outsourcing the management of hundreds of schools to the private sector.

African schools are bad, and as Pilling notes, the result is that “generations are growing up incapable of taking their place in a modern workforce.” He cites a World Bank study earlier this year, which surveyed seven large sub-Saharan countries (including Nigeria) that have 40 percent of Africa’s population. The World Bank researchers found that students in these countries averaged three hours of education a day and that many of the teachers “fail simple literacy and numeracy tests.”

Another study, by Justin Sandefur of the Center for Global Development, looked at math scores in Africa, and found that the average African student would score in the fifth percentile on a European math exam.

But in a continent with poor schools, Liberia ranks at the bottom. He notes that there’s only a 20 percent chance that Liberian women with a fifth-grade education can read a sentence. In 2013, 25,000 people took the entrance exam to the University of Liberia. They all flunked.

So in 2016 Liberia’s education minister, George Werner, said that the country was outsourcing the management of 50 of the country’s schools to Bridge International Academies, a Nairobi-based company that manages schools in seven countries. Although Bridge is a for-profit company, its investors include Mark Zuckerberg, Bill Gates, and Pierre Omidyar, so it can be regarded as nearly a social enterprise.

Bridge charges parents $7/month, but they make money by giving their students tablets and having rigorously standardized lesson plans developed in the U.S. As part of the standardization, teachers read scripts (or what educators call “rubrics”). The scripts are so detailed that they tell teachers when they should make eye contact with students and when they should snap their fingers.

Two British charities, ActionAid and the Ark, objected to Bridge’s presence, claiming the company’s methods were somehow “Victorian.” David Archer of ActionAid told Pilling that Bridge’s methods “appear to be high-tech and modern” but are based on “a teaching and learning practice that takes us back 100 years.” (Of course, those grim Victorians made sure that students learned to read, write, and count.)

Based on the pressure from British charities, the Liberian education ministry relented and only allowed Bridge to run 25 schools. They then awarded contracts to run another 70 schools to four other private operators and created a randomized trial to see which operator did the best job in educating students. The ministry also saved $4 million a year by eliminating 1,500 teachers on the payroll who were either dead or didn’t exist.

Pilling went to government-run schools and privately-managed ones. The government-run one he visited was in the evocatively named town of Smell No Taste, named because it was next to a now-closed American base where the Liberians could smell the GIs grilling “unaffordable meat” they couldn’t eat. At Robert Stanley Caulfield Elementary and Senior High School, Pilling found 1,200 students and 38 teachers, all of whom were being paid. The desks were worn down, and the school’s science lab and music department were in the school library. For science, the librarian handed out drawings of beakers and other laboratory equipment. For music, the librarian handed out drawings of musical instruments.

He then went on to visit schools managed by Bridge International Academies and by other operators. According to Pilling, Bridge’s schools were the best run (although they don’t have cafeterias so many students and some teachers work all day without eating). He was less impressed with other school operators, although the deal between the government of Liberia and Bridge allowed Bridge to pick schools with good Internet connections that were near good roads, and competitors’ schools were in more remote areas. Pilling was most impressed by a school run by Rising Academy, a company based in Sierra Leone that runs five Liberian schools. Rising Academy’s schools, says Pilling, have “well-structured lesson plans” that don’t rely on electronics.

This is only the first year that Liberia has had private operators managing schools, and the randomized trial should provide important information. But we should give Liberian Education Minister George Werner credit for realizing that the government monopoly of education in his country no longer worked.

“In every country I know, public and private sectors are side by side,” he says. “We do that for roads and bridges. Why not for education?”