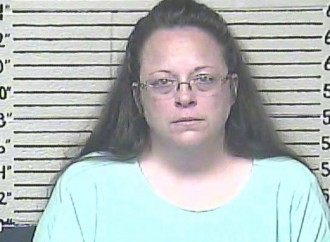 There’s quite a story to be told about the conflict between Alabama Governor George Wallace and Federal Judge Frank Johnson, Jr.

Johnson, whose father had been the only Republican member of the Alabama state legislature, was a Republican activist in his own right and was named to the federal bench by President Eisenhower. In the late 1950s, he ordered a Barbour County, Alabama judge named George Wallace—a former classmate of his at the University of Alabama—to turn over voting records to the U.S. Commission on Civil Rights. Wallace refused, for a time, and became known as “the fightin’ little judge” (he was a former state Golden Gloves champion, bantamweight). The controversy propelled Wallace into the governorship, ultimately for four terms, plus a term, truncated by death, for Wallace’s wife Lurleen.

Johnson was part of the panel that ordered the desegregation of the Montgomery buses (in the case that made Rosa Parks an icon), and he forced the state government of Alabama to allow the historic Selma-to-Montgomery march.

Wallace was the face of resistance to civil rights, and Johnson was the man Wallace called “that scalawaggin’ integratin’ liar” (a scalawag was a Southern Republican who, during the post-Civil War occupation known as Reconstruction, was considered a traitor by supporters of the Confederacy). Johnson played such a role in desegregating the state that some dubbed him “the real governor of Alabama.”

What a movie that would make! But, of course, we’re unlikely to see such a movie, because the Democrat would be the bad guy and the Republican would be the good guy, and Hollywood doesn’t swing that way. (If we did see the movie, it would be all about perpetuating the myth that today’s Southern Republicans are “really” just the old segregationist Democrats, a libel with which we’ve dealt in previous columns in this space.)

An aside: There are, likewise, countless movies to be made about the Communists’ record of oppression, espionage, and subversion of democracy, but we’ll see few of those, because Hollywood treats the Communists (who killed more than 100 million people) as good guys or as people who were misunderstood or who were falsely accused of wrongdoing. The Lives of Others is a very rare exception to that rule, and the TV program The Americans, about Reagan-hating Soviet undercover agents in the 1980s, gets a pass because Progressives identify with the program’s anti-heroes. Usually, we get unintentional satire like Good Night and Good Luck.

Back to Wallace: I wrote in February about how the media scrub the record of Wallace’s party affiliation (http://capitalresearch.org/2015/03/gov-george-c-wallace-unknown-alabama/ ). Now, another example, in the person of Kim Davis, the county clerk in Kentucky who refused to issue marriage licenses to same-sex couple.

She is a Democrat.

Good luck finding that fact in the news coverage of her case.

I know from news stories that she’s a Christian, even that she is specifically an Apostolic Christian. I know that her mom was the clerk. I know how many times she’s been married (four, a number that, the media imply, disqualifies her from claiming her faith as a rationale for refusing to issue the licenses). I know that, in the opinion of Michelle Collins, panelist on “The View,” Davis is too ugly to have had one husband, let alone four. (http://www.breitbart.com/video/2015/09/08/abcs-view-host-michelle-collins-calls-ky-clerk-kim-davis-a-bitch-monster/) The feminist Collins said:

Four times, she is my top candidate for “this b***h got a man?,” by the way. Four times, have you seen the lady? Sorry, I’m serious. She’s a monster. I’m sorry.

But, if I depended on the broadcast news, I wouldn’t know that Kim Davis, elected official, is a Democrat.

By the way, there’s a “Frank Johnson” type in this case: The federal judge who ordered her to jail for a time was a Republican appointee and the son of famed baseball pitcher turned U.S. Senator Jim Bunning (R-Kentucky). David Bunning was appointed to the bench by President George W. Bush, likewise a Republican.

Good luck finding that information about party affiliation, either.

In the past few days, I’ve watched 23 full stories on Kim Davis on the broadcast networks. (By “full story,” I mean not just a sentence or too read off a TelePrompTer by a news anchor, but a correspondent-on-the-scene report.) Not one of those stories has mentioned Davis’s party affiliation. Usually, that’s one of the first things that gets mentioned in any story on an elected official, no matter how obvious or irrelevant. The face of Republican Senator Joe Blow appears, and he is identified as “the Republican from [wherever]” or a graphic appears under his face, “Sen. Joe Blow, R.-[homestate].” Not with Kim.

Even in print stories, where reporters use a lot more words and have fewer excuses for leaving out this sort of information, it’s hard to find Kim’s “D.” On Sunday, the Washington Post article mentioned the affiliation in Paragraph 18, noting that “many supporters of LGBT rights voted for her in November because she was the Democratic candidate.” A Post commentary by Dana Milbank, who’s something of a spokesmen for low-information (euphemism: stupid) Leftists, mentioned her affiliation in Paragraph 10 in passing (“Defenders of Davis, a Democrat, cite President Obama’s ‘lawlessness’ . . . ”), but the same column used the words “Republican,” “GOP,” or “(R.)” eight times to describe Davis’s defenders, so it would be easy to miss the reference.

Of the two major gay publications in D.C., Metro Weekly last week did not mention the party background of either Davis or Judge Bunning, and the Washington Blade mentioned in Paragraph 13 of last week’s story that the judge is a Bush appointee but did not mention Davis’s affiliation.

The New York Times got her party ID correct… eventually.

“Because of an editing error, an earlier version of this article misstated Kim Davis’s political affiliation. She is a Democrat, not a Republican.”—New York Times, September 3

If you need a clue as to why the media bury Davis’s affiliation or ignore it entirely, and likewise downplay the party ID of the judge, look at that line from the Post: “many supporters of LGBT rights voted for her in November because she was the Democratic candidate.” The overwhelming majority of people in key positions in the news media are leftwingers, either partisan Democrats or to the left of partisan Democrats. (The fact that some are to the left of Democrats is the reason that there’s some media traction for Bernie Sanders, who’s perceived—wrongly, I believe—to be to the left of Hillary Clinton. My view: Ain’t nobody to the left of Hillary. But what counts is the perception of Hillary as moderate, Bernie as hardcore socialist.)

Being pro-“LGBT rights,” as the media define the position, is part of the Democratic Party brand. The media go to great lengths to protect this brand, ignoring President Obama’s pre-2012 opposition to same-sex marriage—opposition that he said was rooted in his sincere Christian belief. (I’ll deal in a future column with the claim by the President’s campaign guru that the President was lying all along.) The media ignore the fact that Hillary Clinton was a strong opponent of same-sex marriage, remaining opposed as late as 2013, and that, through the Clinton Foundation, she and her husband were effectively on the payroll of various gay-murdering governments.

The media likewise ignore the fact that, in 2008, Proposition 8, which (temporarily) overturned same-sex marriage in California, passed only because of an overwhelming “yes” vote among African-Americans who, even as they voted against gay rights, voted for Barack Obama and the Democratic ticket. Likewise, the overwhelming opposition to gay rights among Muslims, including U.S. Muslims, is ignored because, in the eyes of the media, most Muslims are “our” political allies. You’ve heard of the Westboro Baptist Church (the “God hates f**s” people), and you’re heard a lot lately about Kim Davis’s religion, but I bet you’ve never heard of Muslim televangelist Khalid Yasin, a Harlem native, who has preached widely in the U.S. calling for the death penalty for homosexuals.

It’s like the inherent conflict between advocates for illegal aliens and for the poor and working-class people, including legal immigrants and even the pre-settled illegal aliens, whose labor will be devalued by the entry of large numbers of new illegal aliens. It’s like the inherent conflict between “rape culture” feminists who believe that virtually all claims of rape are legitimate—i.e., true—and civil-liberties supporters who know that false accusations of rape not only occur but have often been aimed especially at African-American men.

If there’s a fight within the Left, the media just pretend it doesn’t exist. ’Cause that would hurt the party brand and the identity politics—“Gay? You must be a Democrat!”—that provides the foundation for that brand and gives it its power.

Kim Davis is, in the eyes of the media, a villain like George Wallace. See https://www.bostonglobe.com/opinion/2015/09/03/renee-graham-kim-davis-follows-footsteps-george-wallace/4Hqsf6bhQoXMwhjLu0cMLO/story.html and http://newsbusters.org/blogs/nb/bryan-ballas/2015/09/04/washington-post-compares-county-clerk-kim-davis-george-wallace which refers to http://www.washingtonpost.com/news/the-fix/wp/2015/09/02/we-have-reached-the-george-wallace-stage-of-the-same-sex-marriage-fight/ .  By the way, neither that linked-to Boston Globe piece nor that Washington Post piece mentioned the Democratic affiliation of either Davis or Wallace.

If George Wallace wasn’t a Democrat, even though he was, Kim Davis can’t be one, either, even though she is. So there. Truth, after all, is what serve The Cause.