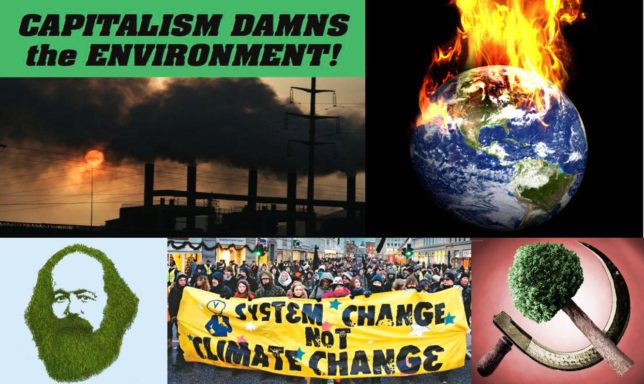 Not long ago, few Americans would have considered imprisoning their fellow citizens for holding different opinions. Such thinking would be expected in Stalin’s Soviet Union, Pol Pot’s Cambodia, or Hitler’s Germany and viewed as totally at odds with the rights and liberties of their constitutional republic. But now it has gone mainstream in the Democratic Party under the buzzword “accountability,” properly translated as “retribution”—punishment for a morally wrong or criminal act.

Welcome to the age of “environmental justice,” when cultural Marxism—with its demands for total conformity in the pursuit of perfectly equal outcomes for all—weaponizes the environmental movement and the powers of government to destroy the life of anyone who dares criticize the climate activists’ agenda.

At its core is the fusion of the Left’s long war to atomize Americans into distinct, controllable tribes with the sweeping regulatory authority that environmentalists have sought for decades. Brought together, this call for “environmental justice” is an unlimited mandate for the Left to transform the country’s economy, civil society, and institutions to permanently control every part of American life.

If you think that’s an exaggeration, consider what we’ve learned over the last few months of the 2020 election cycle.

On Day 1, Biden will require public companies to disclose climate-related financial risks. . . . In his first year, he’ll work to enact legislation requiring polluters to bear the full cost of their climate pollution. But that’s not all: Biden will direct his EPA [Environmental Protection Agency] and Justice Department to pursue these cases to the fullest extent permitted by law and . . . seek additional legislation to hold corporate executive personally responsible—including jail time when merited [emphasis added].

In the first presidential debate in September, Biden reminded the country that “I am the Democratic Party right now,” and Americans ought to take him at his word. Eco-authoritarianism is now the position of that party in Biden’s America.

A Tyranny, If They Can Keep It

Normalizing the punishment of individuals with “wrong” opinions is the ultimate goal of the radical environmental movement, which coined “environmental justice.”

In 2008, then-NASA senior director James Hansen told Congress that fossil fuel company “CEOs should be tried for high crimes against humanity and nature.” After Hurricanes Harvey and Irma in 2017, a number of outraged leftist groups—wrongly convinced that global warming is exacerbating natural disasters—opined that “climate change deniers” ought to be imprisoned. “Put officials who reject science in jail,” tweeted Brad Johnson of the super PAC Climate Hawks Vote.

But jailing the opposition for wrongthink is a perennial wish on the Left.

Socialist Sen. Bernie Sanders (D-VT) announced on national television during a 2019 Democratic presidential primary debate his intent to “prosecute the fossil fuel executives who knowingly destroyed the planet” and are “probably criminally liable because they have lied and lied and lied.”

“Climate change denial should be a crime,” writes the Outline, so that “profiteers and ideologues” can’t be allowed “to place the public in danger without consequence.” The libertarian-turned-leftist Niskanen Center has argued that “oil companies should be held accountable for climate change” through lawsuits. And according to Reason, at least one German solar energy publication has demanded politicians declare a climate emergency in order to prosecute climate “saboteurs.”

The Guardian’s environment editor dismisses all so-called deniers as fitting in one of four categories: “the shill, the grifter, the egomaniac and the ideological fool.” Supposedly neutral Wikipedia hosts a lengthy page on the “pseudoscience” of “global warming denial” created to “give the appearance of a scientific controversy where there is none.” Bill Nye the so-called Science Guy has intimated his support for trying climate skeptics as war criminals. The Nation has brayed that “climate denialism is literally killing us.”

Science magazine, a supposedly serious outlet published by the serious scientists at the American Association for the Advancement of Science (AAAS), is a leading proponent of science-activism and population control policies. It recently published an article written about President Donald Trump’s sinister efforts to “keep researchers who reject climate science in place” in a Biden administration.

The website for the 2016 global warming “propagandumentary” film Before the Flood (starring self-styled climate guru Leonardo de Caprio) features an FBI’s Most Wanted–style list of the “Top 10 Climate Deniers” authored by the director of DeSmogBlog, a far-left Canadian blog reportedly funded by the Canadian arm of the Tides Foundation.

Disturbingly, California Gov. Gavin Newsom’s (D) Office of Planning and Research—a government agency—hosts an entire webpage identifying “the Deniers,” a “small but vocal group [that] has aggressively spread misinformation about [climate] science,” and the conservative foundations funding their nefarious efforts. (Not a peep on the much larger foundations busily funding the Climageddon crowd’s own activism.)

In 2016, U.S. Attorney General Loretta Lynch publicly considered prosecuting members of the oil and gas industry who have constructed a “climate denial apparatus.”

UNESCO, a United Nations education and science group, has published at least one article by a British professor of political theory condemning oil use as “postericide” (an invented word for the murder of future generations) and bemoaning the right of nations to withdraw from international global warming agreements. And who’s to blame for this mess? She writes:

The epicentre of this activity is in the United States. A set of Conservative think-tanks has deliberately deceived the public and policymakers about the realities of climate change. . . .

. . . The time has come to prosecute them for postericide.

Green Is the New Red

This is the language of violent revolution and Soviet-style “comrades’ courts,” where justice goes to die. But don’t take my word for it—Marxist-Leninists have been arguing as much for years. The International Committee of the Fourth International, a communist group, has argued that global warming requires the advent of a single, global communist state able to control the worldwide means of production and flow of resources.

The editor of Ireland’s Marxist Review has called socialism “the only realistic solution to climate change,” praising Swedish eco-firebrand Greta Thunberg for mocking capitalist “fairy tales of eternal growth.” Australia’s Freedom Socialist Party wrote last year that “global warming demands fundamental change, not market ‘solutions’”—adding that “there is something deliciously communistic about a power plant on every roof, contributing to the common energy pool!”

In the United States, the Socialist Workers Party has hailed the Green New Deal—which would effectively ban air travel and non-electric cars, guarantee federal jobs to everyone, and attempt the impossible by mandating that 100 percent of the country’s energy come from renewables—as a “tremendous opportunity to organize around the most comprehensive and radical climate reform proposal put forward to date on a national level—not just in the U.S., but possibly anywhere.”

There’s a good reason for why: Equality of outcome and unprecedented power to regulate Americans’ daily lives promised by environmentalism are the two pillars of socialism in the United States.

They don’t support just a socialist transformation of the economy, but a complete rewriting of the relationship between individuals and the government as understood by Western civilization for centuries. In the 21st century, tyrants wear green.