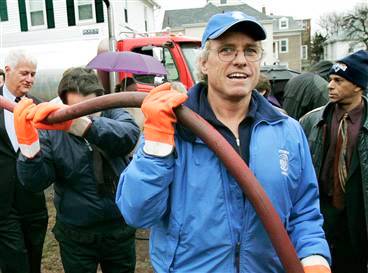 Joe Kennedy (above) pumps heating oil from “our good friends in Venezuela.”

Now more proof of Venezuelan President Hugo Chavez’s ties to international terrorism have emerged. According to a news story, a laptop computer belonging to Raul Reyes, the Revolutionary Armed Forces of Colombia (FARC) leader killed days ago by the Colombian military, contains documents indicating that “Chavez, seeking to raise the FARC’s stature and relieve it of its international pariah status, shares their goal of isolating and discrediting Colombia’s president, Alvaro Uribe.” The laptop also discloses a $300 million gift from Chavez to Colombian rebel groups. Colombian Vice President Francisco Santos reportedly said the captured files also show that FARC was trying to get its hands on uranium in order to build a radioactive “dirty bomb.” Previously, Chavez angered Colombians by urging its government to stop calling the communist FARC and the smaller National Liberation Army (ELN) “terrorists.” FARC and ELN are “true armies” that have “Bolivarian goals,” Chavez says.

This is the same Hugo Chavez who stood at the dais of the United Nations General Assembly in September 2006, the day after President George W. Bush did the same, and insulted the U.S. president in terms even arch-liberal Congressman Charles Rangel (D-New York) found offensive (CNN video of Rangel statement). Chavez made the sign of the cross, and called President Bush “the Devil,” adding “and it smells of sulfur still today.”

American leftists love Chavez, of course. Jesse Jackson, Representative Dennis Kucinich (D-Ohio), and Howard Zinn all sing his praises. On a 2006 visit to Venezuela, useful idiot Cindy Sheehan urged the world to bring down “the U.S. empire” and declared she would rather have Chavez in the White House than President Bush.

Meanwhile, a willing tool of Chavez’s foreign aid program to Americans is former Representative Joseph P. Kennedy II (D-Massachusetts), who heads a nonprofit called Citizens Energy Corporation. CITGO oil company, which is owned by the Venezuelan government and controlled by Chavez, provides discounted home heating oil for America’s shivering masses, and Joe Kennedy is the public face of the program. Kennedy is the fellow you see in television ads promoting the program, which comes to America by way of “our good friends in Venezuela.”

We’ll never know what Kennedy’s father, the late Senator Robert F. Kennedy, a man who called communism “a tyranny that holds its captives in a vice-like subjugation,” might think of his son’s collaboration with Chavez, an admirer of Fidel Castro. As a young man Senator Kennedy was an anti-Communist who had worked for Senator Joseph McCarthy on his anti-subversion subcommittee. The two were so close that RFK made the famous Red hunter godfather to his firstborn child, former Maryland Lieutenant Governor Kathleen Kennedy Townsend.

Read the current issue of Organization Trends to learn more about Hugo Chavez and his American support network. The article is called “The American Friends of Hugo Chavez: Dial 1-800-4-TYRANT,” by Ana Maria Ortiz and Matthew Vadum.