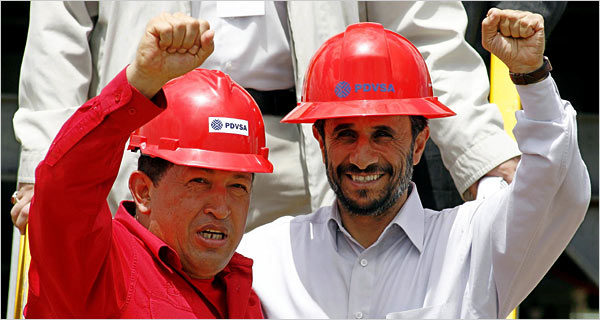 The Bush administration is accusing the government of Venezuelan President Hugo Chavez of providing cash and refuge to the militant Islamist group Hezbollah of southern Lebanon.

“It is extremely troubling to see the government of Venezuela employing and providing safe harbor for Hezbollah facilitators and fundraisers,” said Adam Szubin, political affairs director of OFAC.

Mr. al Din has served as charge d’affaires at the Venezuelan Embassy in Syria and as director of political affairs at the embassy in Lebanon.

Chavez is the foreign leader who in September 2006 stood before the United Nations General Assembly in New York City to insult President George W. Bush, who had stood at the same podium the day before. He called Bush “the Devil” and made the sign of the cross, adding “and it smells of sulfur still today.” When he is accused of supporting terrorism, he customarily responds by calling President Bush the biggest terrorist in the world.

Chavez has provided aid to FARC, the Marxist insurgency in Colombia that is trying to overthrow that country’s democratically elected government.

He’s been trying for some time to convince the more gullible members of the American public that he’s their friend by offering discounted home heating oil. Chavez relies on CITGO, former congressman Joseph P. Kennedy II (D-Massachusetts) who is now head of the nonprofit Citizens Energy Corporation, a parade of useful idiots including but not limited to Representative William Delahunt (D-Massachusetts) and a small galaxy of movie stars to get his message out.