How the Left Changed Its Narrative on the Migrant Caravans 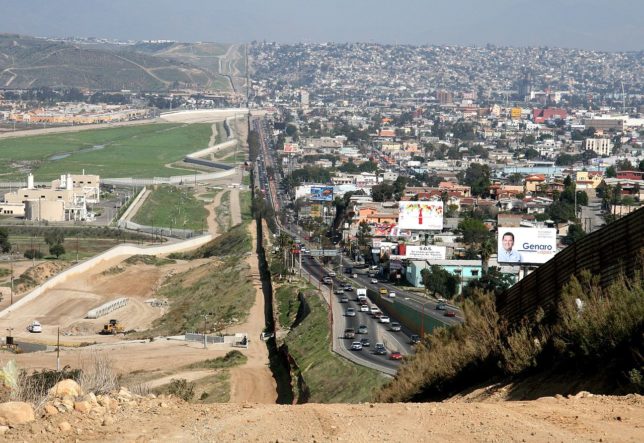 When the Capital Research Center initially exposed the radical agitators aiding the Central American migrant caravans in October, the prevailing attitude in the mainstream media was that the caravans were anything but the product of radical open border agitators.

Left-leaning sources were quick to denounce conservatives for asking questions about the caravan, casting reasonable skepticism as cowardly fearmongering. The New York Times wrote on October 24 that “conspiracy theories have argued that the caravan was organized or supported by the American Left.” The Atlantic’s Adam Serwer went further, charging “right-wing fever swamps” with “frabricat[ing] a national emergency.”

Bill Frelick, refugee rights director for the left-wing Human Rights Watch, took the opportunity to blame the U.S. by telling the Los Angeles Times that the migrants were fleeing violence “in part perpetrated by U.S.-funded and trained security forces.”

Qatari-state-funded media outlet Al Jazeera joined him, crying that “the current migrant caravan is a result of anything other than sustained physical and economic assault by the very country that is now preparing to repel the caravan”—the United States.

Even the centrist Business Insider, not usually given to hyperbole, blamed “prominent conservatives” and “right-wing activists” for floating “conspiracies and misleading information about a migrant caravan,” including funding from George Soros.

In a matter of days, many on the Left became so convinced that they had put the caravan conspiracy theory to bed that a triumphant New York Times wrote: “Did Democrats, or George Soros, Fund Migrant Caravan? Despite Republican Claims, No.”

Then CRC’s research emerged connecting a little-known group—Pueblo Sin Fronteras, or “People Without Borders”—to the caravan, and the narrative began to change.

Pueblo Sin Fronteras, a joint project of the Chicago-based nonprofits Centro Sin Fronteras (“Center Without Borders”) and La Familia Latina Unida (“The United Latin Family”), has organized annual caravans of migrants to illegally cross into Mexico and the United States since 2010, including the caravan in April 2018. The project is primarily organized by the illegal immigrant Elvira Arellano and the far-left activist Emma Lozano, a pastor at the Lincoln United Methodist Church, a hotspot for open-borders advocates.

Like its name implies, Pueblo Sin Fronteras wants a world without borders. Lozano, who got her start in activism in the 1980s with a Marxist-Leninist group co-founded by her late brother, said at a 2003 rally that “we didn’t cross the border, the border crossed us.” Lozano and her followers believe that America’s southern border should be dissolved. As she put it: “We know our history—1/2 of the entire United States was originally Mexico. We have every right to be here.”

Lozano has pushed the envelope by using her position as a pastor and nonprofit officer to endorse multiple Illinois Democratic Party politicians for office, including 2018 gubernatorial nominee J.B. Pritzker, 2018 congressional candidate Marie Newman, and Rep. Luis Gutierrez, whom Lozano attempted to draft as a candidate for president in 2016:

When a staffer for Rep. Gutierrez announced that the congressman wasn’t interested in running for president, Lozano responded that “we’re obligating him to run, we’re not asking him. We’re in a war and when you’re in a war you fight. We’re drafting him.”

Pueblo Sin Fronteras was created in conjunction with other radicals like Mexican-American activists Roberto Corona and Irineo Mujica to establish a migrant pipeline from Central America to the United States:

The idea behind an organized group journey is to alleviate some danger on the long trip, through the simple principle of safety in numbers. Pueblo Sin Fronteras has its own organizers to handle logistics, and each individual is responsible for their own provision of food, water, and funding for transportation, should it be necessary. Groups are created by Pueblo Sin Fronteras; each composed of about 15 individuals under one leader. Five groups are then organized into a sector. This is how the caravan is structured and maintains order as the group moves northward.

Despite claims by many on the Left that the October caravan wasn’t organized by any group, it became increasingly clear that Pueblo Sin Fronteras was involved in coordinating logistics for the operation—as it has been for at least eight years.

On November 13, conservative documentary filmmaker Ami Horowitz reported that the caravan was led by representatives from Pueblo Sin Fronteras, which organized food, water, and other supplies for migrants. And in mid-October, at least three Pueblo activists were identified traveling with the caravan, including Irineo Mujica, who was listed as a contact on a Pueblo Sin Fronteras press release demanding the governments of the U.S. and Mexico “open [their] borders to us because we are as much citizens as the people of the countries where we are and/or travel.”

By the week of Thanksgiving, much of the Left’s reporting on the migrant caravan had quietly shifted direction away from denying Pueblo Sin Fronteras’s involvement—often with comedic results.

Alex Mensing, an organizer for Pueblo Sin Fronteras, told left-leaning USA Today in late October that “’there’s no one in charge of this thing. . . . It’s a mass exodus.” And in mid-November Univision, a Spanish language television network, reported that “there’s no organized effort to try to get these migrants from Honduras to the border, to the U.S.-Mexico border.”

But according to the Huffington Post on November 26: “Alex Mensing, who works for Pueblo Sin Fronteras, the immigration rights group that organized the caravan . . . was part of the group of tear-gassed migrants.” (Mensing later admitted during a radio interview that he was present on the Mexican side of the U.S.-Mexico border when caravan members tried to force their way into the U.S.)

On October 23, the Washington Post published a report which considered the caravan to have been spontaneously generated by Central American migrants.

A month later, the same Post admitted to the existence of “Pueblo Sin Fronteras, an activist group that is helping guide the caravan.”

The New York Times confidently stated on October 20 that Pueblo Sin Fronteras “did not coordinate the caravan that is now traveling north, but has been organizing similar journeys for years.”

Yet one month later, the Times reported that Pueblo Sin Fronteras was “accompanying the migrants.”

Finally, a Pueblo Sin Fronteras spokesman told Fox News on December 3 that Pueblo was helping to organize the caravan in Tijuana, Mexico. He also urged President Trump to “let these people in. Let them try. Let them try. I mean, most of these people are not bad.”

Besides Pueblo Sin Fronteras, a number of center-left groups in the U.S. offered the caravan aid. Our Lady of Mercy, a Roman Catholic church in Potomac, Maryland, offered members education on social justice and how they can “help these individuals and families”—citing the Soros-funded CARA Family Detention Project, which offers free legal services to illegal immigrants. The left-leaning American Friends Service Committee, a Quaker organization, also solicited donations to help the “Pueblo Sin Fronteras Caravan” on its website.

But in the end, the radical Left ran with its open border message. The communist group By Any Means Necessary (BAMN) lent its own support for the caravan, publishing a manifesto on November 25 accusing the Trump administration of being “lawless and repressive.”

“Open it [the border] up or we’ll shut it down!” BAMN wrote. “Everyone must be let in! MEXICANS and AMERICANS stand with us!” The group even called on the Democratic Party to demand the caravan be allowed to illegally cross the U.S. border:

The U.S. midterm elections are over, there’s no reason why civil rights organizations and the Democratic Party apparatus should not be fiercely demanding open access across the border for the caravan and doing everything possible to stop Trump’s racist attacks on the caravan.

But for many of the migrants traveling with the caravan, the promise of crossing the U.S. border proved a lie—one promoted by Pueblo Sin Fronteras. “Pueblo Sin Fronteras cheated the migrants; they told them lies that once they arrived at the border, everything would be very easy,” said Alejandro Solalinde, a Catholic priest and prominent migrant activist in Mexico.

The caravan met a predictable end: stymied at the border. The journey to the border is over, but the pathway to legal entry in the United States—or even citizenship—is far from simple. It will take time and patience for many of these potential asylum-seekers to legally enter the U.S., and many of them may be turned away if their circumstances don’t meet the legal requirements the U.S. immigration system sets for asylees and refugees.

Lured to the border under false pretenses, these migrants deserve sympathy. But there is nothing humanitarian in pushing people to make the dangerous journey north under the pretense of easy access to the United States—particularly when it comes from leftists who won’t pay the price for making false promises.