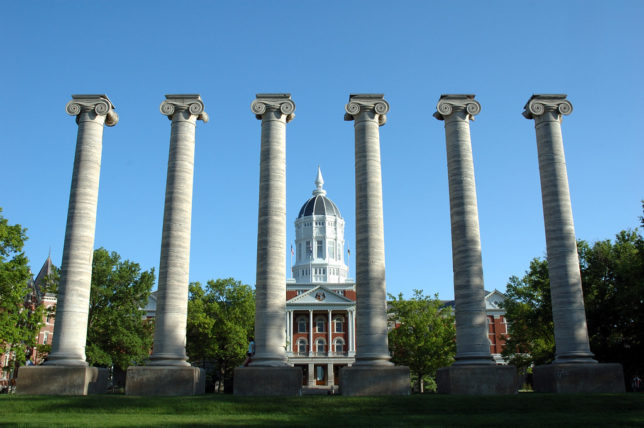 This article originally appeared in Philanthropy Daily on August 6, 2019.

Since this interesting case hit the news cycle, four people have suggested to me that I ought to write about the lawsuit Hillsdale College filed against the University of Missouri concerning a bequest Sherlock Hibbs made in 2002 that endowed four professorships in Missouri’s Trulaske School of Business. My four friends were right, so here are my thoughts on the Sherlock Hibbs case.

Thanks to Robby Soave of Reason, I have read the brief Hillsdale has filed in their lawsuit, so here are some facts from Hillsdale’s brief.

Hibbs died in 2002, and left $5 million to the University of Missouri to endow four professors in Missouri’s business school. He declared that each professor hired under the terms of his bequest be “a dedicated and articulate disciple of the Ludwig von Mises (Austrian) school of economics.”

You could argue that Hibbs went too far in dictating what professors could teach. If the University of Missouri turned down Hibbs’ money, that might have been a principled stand for academic freedom. Or, as Philip Magness argues, Missouri could have hired Austrian economists and said that by doing this, they satisfied Hibbs’s intentions.

But what Missouri appears to have done is taken Hibbs’s money, including all its restrictions, and then ignored the restrictions. The brief filed by Hillsdale cites a statement by the dean of the University of Missouri’s business school in 2003 that “the Austrian school of economics is quite controversial. We didn’t want to wade into that controversy, so we focused on some Austrian tenets that are compatible with what we do in our business school.”

The University of Missouri might well have gotten away with it if Hibbs hadn’t made a very smart move. He appointed Hillsdale College, which has long had a tradition of hiring Austrian economists and which houses Ludwig von Mises’s library, to be a watchdog, and that every four years Missouri had to certify to Hillsdale that the professors hired under the Hibbs bequest were dedicated and articulate disciples of Mises. In 2017 Hillsdale decided that the professors funded under the Hibbs endowment were not Miseans, and sued.

The four professors hired under the Hibbs bequest—Rhonda Reger, Lisa Scheer, Karen Schnatterly, and Daniel Turban—may not have known the difference between Mises and measles in the past, but in 2018 they all signed sworn affidavits that they were “dedicated and articulate disciples” of Ludwig von Mises, and since have shown their love of Mises by refusing to share it with the press. Robby Soave tried to contact the four professors to see how Mises’s writings informed their research. Three of the four professors refused to respond, and the fourth referred Soave to the University of Missouri’s press spokesman, who argues that because Hibbs did not impose any restrictions on teaching, the university can do whatever it wants with Hibbs’s money.

I looked at the CVs of the four professors hired under the Hibbs bequest. One is an expert on recruitment. Two others are marketing professors. Karen Schnatterly is an expert in issues involving white-collar crime, and her CV cites the many media interviews she has given on how white-collar criminals operate. None of the four professors appear to be interested in the more theoretical sort of economics Austrians enjoy studying.

The Chronicle of Higher Education assigned an intern named Liam Knox to write the story about the Hibbs case. Knox, preparing for his career as an objective journalist, proclaimed that the Hibbs case involved “far-right economic ideology” and “a donor’s demands echoing from beyond the grave.” He interviewed someone named Ralph Wilson, “a founder of the Corporate Genome Project,” who claimed that Hibbs was part of a plot to “legitimize” right-wing ideas “and give them a reputation that seems unassailable.”

My goodness! Donors with ideas! We can’t have that!

Universities prefer donors who write checks and do not care how their money is used. A rising number of donors (and not just right-wing ones) would prefer that their money be used for causes they prefer, instead of what a university wants. The conflicts between donors and universities are one example of the problem of donor intent, which I studied in my book How Great Philanthropists Failed And How You Can Protect Your Legacy.

I don’t know of any case involving an enforcement mechanism for honoring donor intent like the one Sherlock Hibbs created. I hope Hillsdale prevails in court, for I believe Missouri’s misuse of the Hibbs endowment is a severe violation of donor intent.