As Jonah Goldberg wrote in his book Liberal Fascism:

Perhaps no elite institution in America was more accommodating to Fascism than Columbia University. In 1926 it established Casa Italiana, a center for the study of Italian culture and a lecture venue for prominent Italian scholars. It was Fascism’s “veritable home in America” and a “schoolhouse for budding Fascist ideologues,” according to John Patrick Diggins. Mussolini himself had contributed some ornate Baroque furniture to Casa Italiana and had sent Columbia’s president, Nicholas Murray Butler, a signed photo thanking him for his “most valuable contribution” to the promotion of understanding between Fascist Italy and the United States.

Secretary Clinton spoke at Columbia’s 18th annual David N. Dinkins Leadership and Public Policy Forum, named for former New York City Mayor David Dinkins, a Leader for the Future as of 1993, who broke New York City so badly—who came so close to turning it into a left-wing calamity like Detroit or Baltimore—that the voters elected Rudy Giuliani mayor and kept the mayor’s office out of Democratic Party hands for 20 years.

In her speech, Secretary Clinton suggested, as she has previously, that, as president, she would wage war on the First Amendment. “We must urgently begin to rebuild the bonds of trust and respect among Americans. Between police and citizens, yes, but also across society. Restoring trust in our politics, our press, our markets.”

Did you notice? In the middle of a speech that was said to be about criminal justice reform, she talked of “[r]estoring trust in . . . our press.” How exactly would she do that?

We’re beginning to find out.

Campaigning in Iowa last month, she told a group of students that “We need to fix our dysfunctional political system and get unaccountable money out of it once and for all, even if that takes a Constitutional amendment.” That’s clearly a reference to efforts to pass an amendment reversing Citizens United, the Supreme Court case about whether the government could censor a movie that—of all things—exposed the record of corruption of one Hillary Rodham Clinton. (See http://www.breitbart.com/big-government/2015/04/14/hillary-clinton-declares-support-for-constitutional-amendment-to-overturn-citizens-united/  )

This follows a tweet from Hillary’s spokesman Jesse Ferguson last week: “Spoiler Alert: HRC policy on internet [sic] might also be different than [sic] WJC policy in 1994. Not b/c he was wrong but b/c times change.” In case you’re having trouble deciphering that tweet, I’ll translate: Hillary’s policy on the Internet will be different from Bill’s.

Bill’s, you may recall, was one of almost complete freedom for the Internet. The result of that policy was an advance in technology and commerce that has changed the world, creating untold wealth for “regular” people and weakening the power of governments and media elites to control the flow of information.

Not surprisingly, Hillary wants to change that. If, like most people who follow such things, you get shivers down your spine when you hear about the Obama administration’s plans to treat the Internet as a highly-regulated public utility; to turn over the Internet’s heart, its domain-name system, to the dictators and kleptocrats of the so-called international community; and to enforce rules that will make it harder for small businesses to use the Internet.

(For example, at a time when the so-called Americans with Disabilities Act has turned into a scam to enrich unethical lawyers—especially targeting small, immigrant-owned businesses—the magazine The Economist reports: “More lawsuits may soon be on the way, as the Justice Department is expected to apply new ADA rules to websites in June. For example, each picture must have text describing it, so that screen-reader programmes can tell blind people what is there.” Each picture. Yes, that’s as insane as it sounds, the equivalent of requiring that restaurants hire aroma-describers for any patrons who might lack the ability to smell. For more, see this Forbes article: http://www.forbes.com/sites/adrianagardella/2015/04/02/does-your-website-violate-the-americans-with-disabilities-act/ )

I was involved in Internet politics from the early days. I founded the first newsletter on Internet politics,  I was involved in creating a key statement on Internet policy for the Clinton administration, and I blew the whistle on Al Gore regarding his false claim about “creating the Internet.” On the conservative/Republican side, there were supporters of Internet freedom (George Will, Rush Limbaugh, Newt Gingrich) and opponents of Internet freedom (some religious conservatives, along with the Weekly Standard when it published the cover story “Smash the Internet”). 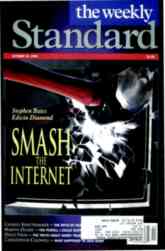 On the Left, the split was mainly between the Clinton people, including Hillarycare creator and “Internet Czar” Ira Magaziner, who favored Internet freedom, and the Gore faction, including folks like Professor Robert McChesney and the Center for Media and Democracy.

The Clinton faction won, and the world is a much better place because of it. (Yes, I’m aware that the Internet, like all major technological advances, has some negative effects as well.) Now Hillary is switching sides.

(Note to those policing sexist language: I sometimes refer to former secretary of State Clinton as “Hillary” not because she is a woman but to differentiate her from her namesake, just as political reporters sometimes called Attorney General and U.S. Senator Robert F. Kennedy “Bobby.”)

When your entire political career consists of maneuvering from one lie to the next, the last thing you want is an unaltered First Amendment and a free Internet.

In her speech at Columbia, she said a number of absurd or offensive things, but these leapt out at me:

Oh, of course! She was referring to the case of Trayvon Martin, who went to the store to get Skittles and a watermelon-flavored drink and a cigar. He used the cigar to smoke marijuana in the parking lot of a convenience store, and experts on drug abuse believe that he was planning on using the other items to make a drug cocktail called “lean,” using the sweet candy and the sweet drink with cough syrup for a hit of codeine.  (See http://newsbusters.org/blogs/tom-blumer/2013/07/22/press-perpetuates-iced-tea-myth-coverage-zimmerman-verdict-and-trayvon-m ,  https://www.youtube.com/watch?v=Ebu6Yvzs4Ls&feature=youtu.be at 3:40, http://www.americanthinker.com/articles/2012/06/what_the_media_choose_not_to_know_about_trayvon.html , and  http://www.examiner.com/article/trayvon-s-skittles-arizona-tea-and-something-called-purple-drank .)

Martin lay in wait for George Zimmerman, a Latino man with a long record of opposing racism, and committed a life-threatening assault against him. According to Martin’s girlfriend who was on the phone with him during the incident, he attacked  Zimmerman because he assumed that Zimmerman was gay. (She explained that Martin thought Zimmerman was a “creepy ass-cracka” —that’s a homophobic , not racist, term—and that he thought Zimmerman was “a rapist,” and that, “for every boy, for every man, every —who’s not that kind of way, seeing a grown man following them, would they be creep out?” [sic])

Perhaps, in referring to Martin, Hillary should have said, “You don’t have to look too far from this magnificent hall to find . . . [m]others and fathers who fear for their sons’ safety when they go off to school—or just to go buy a pack of Skittles and try to crack the skull of a Latino assumed to be gay.”

No, Hillary isn’t campaigning for the vote of the Westboro Baptist Church (“Gods hates f**s”) crowd. She is expressing solidarity not with gay-bashers but with the liars and conspiracy theorists who, with their ignorant followers, turned the Martin-Zimmerman case into a case study of how deception works in politics and sometimes gets people killed. Elitist politicians like Hillary Clinton simply assume that their followers are ill-informed at best and, at worst, morons, and they seek to take advantage of them to gain power and money.