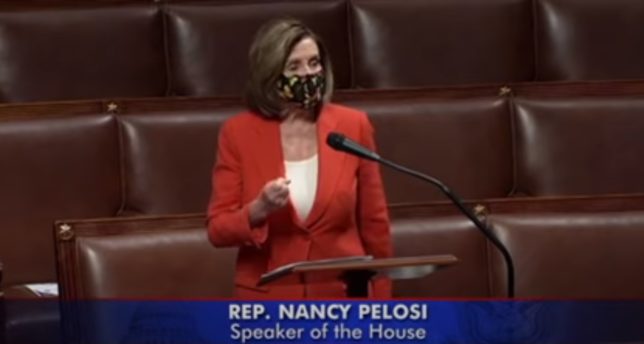 Speaker of the House Nancy Pelosi speaking from the House floor in favor of H.R. 1 on March 2, 2021. Credit: Forbes Breaking News/YouTube.
by Sarah Lee

Although the scuttlebutt around DC is that the oddly named For the People Act (H.R. 1) is unlikely to pass both houses of Congress, there’s reason to be concerned about what left-leaning legislators are attempting to do with election “reform,” not least because some of what’s in the bill was implemented during the 2020 election to disastrous effect.

And the proposals that haven’t already been tried—such as forced donor disclosure—are even worse.

The act known as House Resolution 1 is sponsored by Rep. John Sarbanes (D-MD) and co-sponsored by House Speaker Nancy Pelosi (D-CA) and Rep. Zoe Lofgren (D-CA). It was originally introduced in 2019, and conservatives have been warning ever since about how it would harm elections.

While the act is damaging in several ways, two are highly significant. On the election “reform” side, the Republican National Lawyer’s Association gives us a handy list of the top 10 egregious provisions affecting all states regardless of existing state laws. They include automatic voter registration with an eye toward registering 16- and 17-year-olds, abolishing voter ID laws, mandated early voting, no excuse absentee/mail-in voting, and same-day voter registration. We saw several of these tactics employed in the 2020 general election in the name of COVID, and hardly an election observer alive would say that election went smoothly and without serious flaws. Some irregularities are continuing to be investigated in the states.

Advocates of messy changes to election administration in the states, some of which H.R. 1 would enshrine as federal law, are apparently comfortable being hypocrites. One provision of H.R. 1, ballot harvesting, was in the news as an election evil when a GOP operative tried it in North Carolina in 2019 and was charged with a felony. Are supporters of H.R. 1 now saying that ballot harvesting is ok and should be carried out on a national scale?

There’s also the matter of H.R. 1 forcing organizations to disclose their donors in ways they’ve not been asked to before, all to fight the left’s favorite boogeyman, “dark money.”

The left-leaning Campaign Legal Center celebrates H.R. 1’s forced disclosure of donors who give more than $10k for campaign-related ads in an election cycle as a way to keep “dark money” spending at bay. If it were true that big money always wins political races, this might at least sound rational. But it’s not.

And liberals may not be thrilled with a new federal law that cuts into their nearly 4 to 1 “dark money” fundraising advantage over conservatives in the multi-billion dollar universe of 501(c)(3) nonprofits. In fact, Biden’s own inaugural address, backed by millions from corporations like Amazon and Comcast, would have been illegal if H.R. 1 was already law.

Mainstream Democrats may already be balking at the donor disclosure provisions in the bill. After all, there’s no reason to suspect a Democratic legislator or left-leaning nonprofit would be willing to name its top 10 donors if asked.

The fact is no one on either side of the aisle really wants H.R. 1. But liberals may want parts of it—particularly the election “reform” pieces. Wise conservatives will learn what’s in this monster, even if it dies a welcome death, because parts of the reanimated carcass will come back in the future.

See also “Election Integrity Is a National Imperative” by Mike Pence at the Daily Signal.