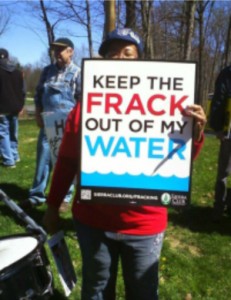 When it comes to stopping America’s push for energy independence, two groups have a powerful shared interest: Radical U.S. “green” groups and Russian energy oligarchs. As Putin’s Russia bullies its neighbors—and sometimes invades and conquers them—a key element of its strategy is to prevent the spread of fracking, a technology that is unlocking vast energy reserves in the U.S. and Europe but weakening the wealth and power of Russia. New research into one shady foreign funder of the U.S. environmental movement reveals extensive ties to Russian energy interests, with a sidetrip through, of all places, Bermuda.

“I have met allies who can report that Russia, as part of their sophisticated information and disinformation operations, engaged actively with so-called non-governmental organizations—environmental organizations working against shale gas—to maintain European dependence on imported Russian gas.” NATO Secretary General Anders Fogh Rasmussen, former Prime Minister of Denmark, made that extraordinary claim last June at the Royal Institute for International Affairs, known as Chatham House, the British counterpart to the prestigious Council on Foreign Relations in the United States. (NATO, the North Atlantic Treaty Organization, is the alliance of Western nations that was created in 1949 to resist the Soviet Empire. It currently includes the governments of 28 countries.)

During the Cold War, the Soviets had a term for people in the West who, blinded by ideology, served as half-witted or unwitting tools of the Communist Party: полезные дураки (polezniye duraki), which means “useful fools” or, as it’s often translated, “useful idiots.” The term is used today to describe people who serve a malignant cause, especially as agents of propaganda, because they naively believe that cause to be good. Such people are held in contempt not only by people who are actually on the side of good but also by the evildoers who cynically make use of them.

Today, that role is played by people who wildly exaggerate or outright fabricate the dangers of fracking, which has the potential to free the U.S. and its allies from energy-dependence on dangerous dictatorships like Russia. Those who deny the science of fracking are assisting the Russians (and others) who seek to defeat constitutional democracy and oppress the world’s poor.

Everything the anti-fracking activists do takes money. And some of that money, it appears, is coming from Russia.

Foreign energy interests already have a stake in the U.S. environmental movement. For example, the royal family of the oil-rich United Arab Emirates funded the 2012 Matt Damon film Promised Land. Now a recent report which I co-authored for the Environmental Policy Alliance shows there may be even more smoke leading back to Russia through Bermuda.
As we found in the report, a surprising number of U.S. nonprofits have moved money offshore. Animal rights activist groups such [See the rest of this issue here.]