Teaming up with environmental criminals in China to bully the world 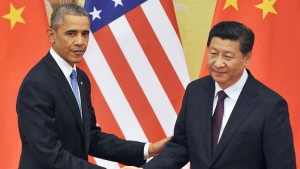 Environmentalists hope the so-called “climate deal” between the U.S. and Communist China will lead to a worldwide Global Warming regime. But is it really a good idea for the U.S. to ally with a totalitarian dictatorship—a systematic violator of the environment and of human rights—in order to bring the rest of the world to heel?

It’s the world’s greatest environmental criminal. Its economy makes a relative few well-connected cronies rich, their bank accounts filled with profits from slave labor. To maintain its power, it tortures and jails dissidents and it seeks to intimidate anyone from the Free World who gets in its way. It may be the worst violator of human rights in history—it’s killed more of its own people than any other government, ever—but to environmentalists, Communist China is the perfect partner in their effort to bully the world on Global Warming policy.

When the Obama administration announced a Global Warming deal in November with the so-called People’s Republic of China, “greens” celebrated. “It’s a Game Changer” declared the headline on the website of the leftist Mother Jones. The story at ThinkProgress was headlined: “Why the U.S.–China Deal is an Energy, Climate, and Political Gamechanger.” Media reports described the arrangement as a “breakthrough,” a “landmark,” and “history-making,” although NBC News worried that Republicans might put up “landmines” to block the deal.

Among other things, the deal commits the U.S. to reduce emissions of carbon dioxide 26% to 28% below 2005 levels by 2025. China’s Communists promised to reduce emissions starting in 2030, with 20 percent of the nation’s electricity coming from non-carbon-based sources by that year.

In those promises, China is pledging only to cause things to happen that, most likely, were going to happen anyway. Yet, to Global Warming strategists, it’s critical to bring together the U.S. and China, so that the two countries can pressure the rest of the world. That’s what prominent environmentalist Stephen Chu suggested in 2010 when he was President Obama’s secretary of energy.

In a May 2010 report in Wired magazine, Daniel Roth reported that Secretary Chu considered China “the key to America’s long-term energy future. Since the U.S. and China produce some 40 percent of the world’s carbon dioxide emissions, Chu argues that far-reaching multicountry agreements aren’t really necessary. . . . It’s smarter to deal with China alone. A massive investment by the U.S. and China, and a series of strong treaties between the two countries, would have a big effect on actual emissions, and the pacts would also serve as a model [Click HERE for the full story]