And her response to those who consider it a device for “social control.” 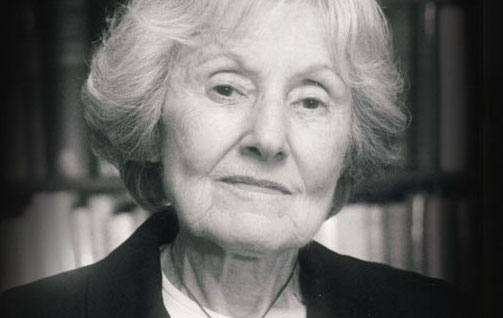 Widely respected historian Gertrude Himmelfarb, who died on December 30 at the age of 97, relied upon her deep and wide knowledge of Victorian England to argue for the reintroduction of traditional values into American life. With her husband Irving Kristol, she helped lay the successful intellectual foundation for the neoconservative movement that changed the country’s culture and politics so much for the better in the wake of the turbulent 1960s.

Himmelfarb’s work—and the quiet strength, dignity, and grace with which she did it—lives, of course.

Known to family and friends as Bea Kristol, she taught for more than 23 years at Brooklyn College and the Graduate School of the City University of New York, authored more than a dozen books, and wrote countless articles and essays in the academic and popular press. Naturally, many of them are being cited and quoted in remembrances of her.

Part of her 1995 book The De-Moralization of Society: From Victorian Virtues to Modern Values is perhaps particularly worth recalling here. An adaptation of the section appeared as “The Age of Philanthropy” in The Wilson Quarterly in 1997. (A subscription to the online-research service is required for the full article at the link.) 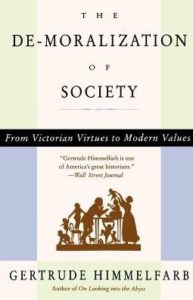 By the late 18th century in Victorian England, the “principle of ‘philanthropy’ (still carrying with it its original meaning of ‘love of mankind’) had given rise to full-time philanthropists such as John Howard, who successfully agitated for the reform of the prison system, and Jonas Hanway, who devised the ‘boarding out’ system to remove infants from the poorhouses,” Himmelfarb writes in the article. “Hannah More, preferring moral reformation to philanthropy, characterized this period, not altogether in praise, as ‘the Age of Benevolence.’” (All parentheticals in original.)

In “the Age of Philanthropy,” the “dispensers of charity, no less than the recipients, were held to high standards,” as Himmelfarb describes it.

They were expected to give generously of their time and resources and to have a sustained personal involvement in their work. This was not “checkbook philanthropy,” satisfied merely by the contribution of money (although such contributions were expected, in small amounts as well as large, since the organizations were entirely dependent on private funds). Nor was it the kind of “telescopic” philanthropy satirized by Charles Dickens in the character of Mrs. Jellyby, in Bleak House, who was so preoccupied with the natives of Borrioboola-Gha that she neglected her own children. Nor was it professional philanthropy in the current sense, where everyone from the director of the charity to fund-raisers, social workers, and clerks is a salaried employee, paid to do a job quite like any other.

Himmelfarb goes on to note, “Philanthropy was inspired by the dual motive: to serve others and to fulfill a moral need.” Quoting Charity Organisation Society volunteer Beatrice Webb, Himmelfarb writes that the real philanthropist would not be guilty of “‘pharisaical self congratulation’ . . . for he would be too aware of the ‘mixed result’ of his work (if indeed it had any result) ‘to feel much pride over it.’”

To be a real philanthropist, one had to give not just money, but of him- or herself—some might think even acting out of a sense of the transcendent, not merely the transactional, as if on a pilgrimage with the others, as it may be.

She acknowledges criticisms of Victorian philanthropy, including some that sure seem awfully familiar and attention-getting today. “The gravamen of the charge now is that philanthropy is all too often a self-serving exercise on the part of philanthropists at the expense of those whom they are ostensibly helping,” according to her summary.

Philanthropy stands condemned, not only as ineffectual but as hypocritical and self-aggrandizing. In place of “the love of mankind,” philanthropy is now identified with the love of self. It is seen as an occasion for social climbing, for joining committees and attending charity balls in the company of the rich and the famous. Or as an opportunity to cultivate business and professional associations. Or as a way of enhancing one’s self-esteem and self-approbation by basking in the esteem and approbation of others. Or as a method of exercising power over those in no position to challenge it. Or as a means (a relatively painless means) of atoning for a sense of guilt, perhaps for riches unethically acquired. Or as a passport to heaven, a record of good works and virtues to offset bad works and vices. . . .

Himmelfarb sees this criticism as “a corollary to the ‘social control’ thesis. Just as Victorian values are said to have been an instrument for the pacification of the working class, so Victorian philanthropy is described as a device for the subjugation of the even more vulnerable class of the very poor.” Dispensers of charity managed to keep the “undeserving” poor in a condition of servility in the workhouse, and the “deserving” poor were forced into that same labor market on terms set by the employers. Discontent was suppressed, the status quo maintained, and profits secured.

“The difficulty with the ‘social control’ thesis is that it can be neither proved nor refuted, since any empirical fact can be interpreted in accord with it,” Himmelfarb notes.

If some philanthropists and reformers advocated a system of free, compulsory education, it can be said that they did so only because educated workers were more productive than uneducated ones; if others opposed such a system (ostensibly out of a distrust of any kind of state-controlled education), it was to keep the poor in a state of ignorance and submission.

Her rebuttal to this point remains relevant. “By this mode of reasoning, any philanthropic enterprise, regardless of its nature, purpose, or effect, can be disparaged and discredited.”

Gertrude Himmelfarb and her contributions will be missed.

This article first appeared in the Giving Review on January 1, 2010.