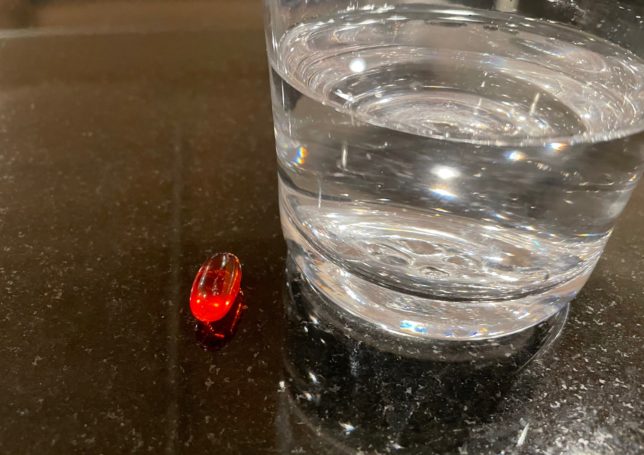 So hip, savvy, mostly young conservatives have been talking about pills and being “pilled” in various ways for a while now. Join us in stopping to pretend to know—and trying to learn, and even tentatively apply—what they’re talking about.

During a dramatic scene in the 1999 sci-fi film The Matrix, from whence this all comes, mysterious rebel leader Morpheus (played by Laurence Fishburne) offers main character Neo (Keanu Reeves) the choice between a red pill and a blue pill.

Risking oversimplification, the red pill represents a willingness to learn an unsettling and potentially life-changing truth, but taking it—gaining the inconvenient awareness—would mean living in an uncertain and likely much more difficult “reality of truth.” Alternatively, the blue pill allows its taker to remain in the contented, comfortable ignorance of the machine-generated Matrix’s status quo—believing whatever he or she wants to believe. Once the choice is made, of course, there’s no turning back; it’s irrevocable.

Many have transposed their own meanings on the choice of pills, of further course. Among other things, for example, proponents of LSD and transgenderism have offered interpretations, as have those with various ideological and political positions.

Chancing an overstretched analogy, though, try this belated one. In “philanthropic pharmacology,” a red-pilled conservative philanthropoid would risk facing the unsettling realization that almost all of establishment philanthropy is irretrievably progressive, or “woke,” and deciding whether and, if so, how to live with and in the harsh reality of that truth. It would be difficult.

Alternatively, a blue-pilled center-right grantmaker or grantmaking professional would ensure for him- or herself a contented existence in the comfortable, status quo world of high-end giving in America—believing it worthy of defending overall, even if utterly ideologically imbalanced. It’s easier, and rational.

Subsequently, other pill colors and characteristics have creatively been suggested. To be “black-pilled” is to believe there’s no way out of a problem. To be “white-pilled” is to abandon the despair of red and black pills and yield to that which hope can promise. In an American Mind piece last month, Spencer Klavan re-opens the discourse by introducing an additional, non-colored “quantum pill.”

“When you take the Quantum Pill, you can see the future in both a black-pilled and a white-pilled, both an optimistic and a pessimistic way at once—like a quantum computer hovering at 1 and 0 simultaneously, or like Schrodinger’s Cat, both alive and dead until observed,” Klavan writes. “This state of total suspension in between possibilities is perhaps the most accurate frame of mind with respect to the future, which nobody knows—not the angels, not even the son, but only the Father in heaven.”

There are others, I’m sure, and likely will be more. (Seems like pill “cocktails” could sure be on their way, too.) Pick your, or maybe name a new, pill—in whatever your preferred context.

In the meantime, if you don’t already, know that in The Matrix, Neo chooses the red pill and thus courageously joins the rebellion against the established, generated Matrix. And enjoy applying—if necessarily even further stretching—the analogy in the philanthropic context.

This article originally appeared in the Giving Review on September 7, 2021.