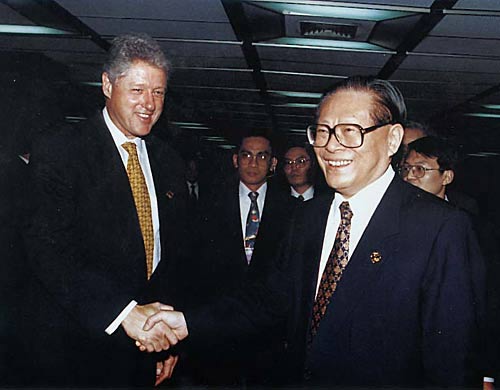 With all this talk of Russians allegedly interfering in U.S. elections, it is worth recalling that it wasn’t too long ago that the previous Democrat in the White House betrayed America by working hand in hand with our Communist enemies in mainland China.

As president, Bill Clinton essentially wiped out any strategic advantage the U.S. had by selling advanced U.S. missile technology to our enemy, the People’s Republic of China.

That “administration’s voluntary release of all the secrets of America’s nuclear tests, combined with the systematic theft of the secrets that were left as a result of its lax security controls, effectively wiped out America’s technological edge,” David Horowitz writes in the recently published, The Black Book of the American Left Volume 7: The Left in Power: Clinton to Obama.

Unlike the administrations that preceded it, the Clinton administration accepted millions of dollars from the military and intelligence services of at least one hostile foreign power. All of this was done in exchange for illegal campaign contributions from a massive totalitarian country determined to eclipse the U.S. as a world superpower.

President Clinton also lifted security controls, allowing thieves to access other vital military technologies, while disarming his own side and opposing needed defenses.

“One of the key technological breaks China received, without having to spy to get it, was the deliverance of supercomputers once banned from export for security reasons,” writes Horowitz.

“Supercomputers underpin the technology of nuclear and missile warfare, and not only for firing and controlling the missiles. A supercomputer can simulate a nuclear test and is thus crucial to the development of nuclear warheads. But, according to a Washington Post editorial: ‘In the first three quarters of 1998 nine times as many [supercomputers] were exported [to China] as during the previous seven years.’”

“This transfer,” he writes, “was authorized three years after the spy thefts were detected. What rationale—besides stupidity, greed, or some other equally indefensible motive—could justify this? What responsible president or administration official, at any relevant level in any government, would allow the massive transfer of national-security assets like these to a dictatorship they knew had stolen their country’s most highly guarded military secrets?”

Back in the 1990s, as longtime Clinton bagman Terry McAuliffe, now governor of Virginia, set records raising money for the Clintons. In that era congressional investigators unearthed an elaborate Communist Chinese money-laundering scheme.

Under it money was funneled to the Clinton organization through businesspeople, including Yah Lin “Charlie” Trie. In that case, 94 individuals either refused questioning, pled the Fifth Amendment, or fled the country. Trie accepted a plea bargain with federal prosecutors in 1999 in exchange for providing information about questionable campaign contributions from China.

According to a Wall Street Journal account from Clinton days, a bipartisan congressional inquiry “found Beijing has stolen U.S. design data for nearly all elements needed for a major nuclear attack on the U.S., such as advanced warheads, missiles, and guidance systems. Targets of the spying ranged from an Army anti-tank weapon to nearly all modern fighter jets. Most wasn’t done by professionals, but by visitors or front companies. Lax security by the Clinton Administration is blamed in part, and satellite makers Hughes and Loral are criticized.”

“They were able to accomplish this with indispensable assistance provided by the Clinton White House that allowed them to circumvent technology controls instituted for national-security purposes by previous administrations,” writes Horowitz.

Then-Rep. Curt Weldon (R-Pa.), who was chairman of the National Security subcommittee on military research and development and is fluent in the Russian language, characterized the six years of Clinton’s administration that had thus far elapsed as “the worst period in our history in terms of undermining our national security.”

When Weldon visited Russia with 10 other congressmen a Russian general threatened them, saying that if the U.S. deployed ground troops to Kosovo, Russia could throw America into chaos by detonating a nuclear device in the sky near the eastern seaboard that would destroy every computer chip in the country, disabling telephones, airplanes, and electrical grids.

Such are the fruits of appeasement.

Incessant propaganda from the Left during the recent campaign and the post-election period, has stressed President-elect Donald Trump’s connections to Russia while downplaying or ignoring altogether the Clintons’ relationship with the Kremlin.

The connections of Trump, his family, his campaign staff, transition team, and would-be cabinet members to Russia are being microscopically examined and hyped daily in the news.

But Hillary Clinton’s team also has ties to Russia.

Her campaign chairman John Podesta became a member of the board of directors of solar energy startup Joule Unlimited in 2011. Eight months later Rusnano, a Kremlin-backed investment fund announced it would invest around $35 million in Joule. A few months after, about the time Podesta joined then-Secretary of State Hillary Clinton’s Foreign Affairs Policy Board, Rusnano Chairman Anatoly Chubais joined Joule’s board.

Podesta has been less than forthcoming about his relationship with the Russian government. “What he doesn’t like to talk about is the business he’s done with a Kremlin-backed investment firm and the lengths he’s gone to avoid scrutiny of this relationship,” the Wall Street Journal reported Oct. 23.

And in August the FBI and Justice Department announced they were investigating the Podesta Group, a lobbying and public relations firm co-founded by John Podesta, for any connections to corruption that occurred in the government of former Ukraine President Viktor Yanukovych. Russia-controlled Uranium One retained the firm in 2012, 2014, and 2015, to lobby Clinton’s State Department and was paid $180,000 in fees.

Uranium One shareholders gave the corrupt Bill, Hillary and Chelsea Clinton Foundation more than $145 million in donations in the period before Hillary’s State Department approved a transaction giving Russia control over 20 percent of U.S. uranium. And as Russia, which initially didn’t have a controlling interest in Uranium One, was gearing up to take over the company, Bill Clinton received a whopping $500,000 for a single speech on Russian soil.

And when he was president, Bill Clinton wasn’t exactly hostile toward Russia.

As journalist Bill Gertz wrote years ago, Clinton sent “a billion dollars to Russia earmarked for its ‘nuclear disarmament program,’ even though the government’s own General Accounting Office has already determined that millions of these dollars are going to Russian scientists working to build new nuclear weapons for the Russian military.”

Like Clinton, President Obama has written big checks to the nation’s enemies, sending $150 billion to the crazed mullahs of the Islamic Republic of Iran. Islamists have penetrated both of our political parties but only Democrats –the party more amenable to subversives— have two sitting congressmen, Keith Ellison of Minnesota and Andre Carson of Indiana, who are Islamists.

While the Clinton administration was working to improve relations with China, “the Chinese themselves were systematically plotting to penetrate the Democratic Party, subvert America’s electoral process, and—with the help of the president himself—infiltrate the administration and steal America’s advanced weapons arsenal.”

That doesn’t sound a whole lot different than Obama’s nuclear so-called nonproliferation pact with Iran, which in reality green-lights Iranian adventurism by helping the mullahs get their hands on nuclear weapons technology to use against Israel and the United States.

In the modern era Democrats have a long history of aiding America’s enemies, interrupted only by brief periods of tension.

After the brutal shellacking Democrats got at the polls Nov. 8, no wonder they’re doing so much saber-rattling against Russia.

They need an external villain to prevent their own grassroots from rising up against them.

This article originally appeared at FrontPageMag.