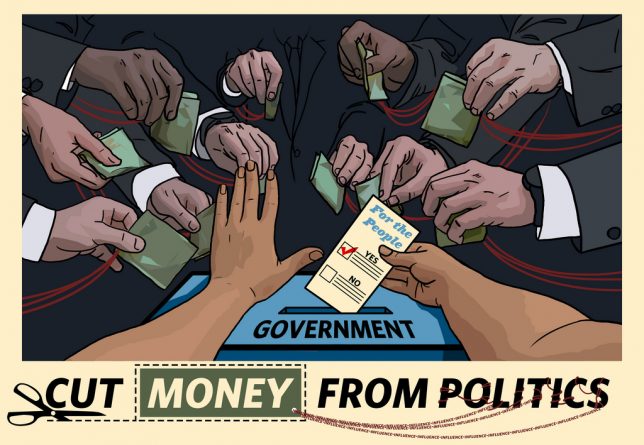 Is “big money” from special interests ruining politics? Are super PACs robbing the power of everyday voters? Will donations from so-called “dark money” groups be the end of democracy in America?

If you ask activists from the Democracy for the People campaign, the answer is yes. And they should know—they’ve been funding super PACs with “dark money” donations for years.

In the words of Joe Ready, the campaign’s director, the 2018 midterm elections only brought “more big money flooding in from mega-donors and Super PACs, and yet more attack ads financed by mysterious ‘dark money’ groups that don’t reveal the interests behind their spending.”

The “dark money” groups leftists like Ready warns about are 501(c)(4) advocacy organizations, which may engage in lobbying and donate to political action committees (or PACs) and aren’t required by the IRS to disclose their donors. Causes and candidates on both sides of the aisle utilize these and other financial mechanizims. Calling them “dark” is a mere rhetorical device used by critics to color their opponents.

Democracy for the People’s long-term goal is “to overturn Citizens United [v. FEC],” the 2010 Supreme Court decision prohibiting the government from restricting independent expenditures by nonprofits and other groups in elections. The campaign aims to enact a constitutional amendment “declaring that corporations are not people, money is not speech, and our elections are not for sale” to “the mega-donors and Super PACs who are undermining our democracy and the principles upon which it stands.”

You may not have heard of US-PIRG, but you’ve probably run into one of the many clipboard-wielding canvassers it hires out to groups like the Human Rights Campaign and the Southern Poverty Law Center to collect donations and gather petition signatures.

Environment America has its own super PAC, the Environment America Action Fund. It’s a hefty Democratic funder, raising $16.4 million in 2018 (as of writing) and spending $13.1 million on left-wing groups such as the League of Conservation Voters.

So what does this have to do with US-PIRG and Democracy for the People?

Fair Share Action is directly affiliated with the 501(c)(4) voter mobilization and advocacy group Fair Share, which—together with US-PIRG and Environment America—are all members of the Public Interest Network, a blanket brand for dozens of center-left organizations sharing many of the same officers and staff.

At the top of the Public Interest Network are a series of vice presidents who are also listed in FEC filings as the heads of Environment America Action Fund, Fair Share Action, and a third (and much smaller) political action committee called the Public Interest PAC, which is funded by the other PACs.

There’s US-PIRG President Faye Park, who is also head of the Public Interest PAC and chair of Environment California, a state group, which gave $1.13 million to Environment America Action Fund in 2016.

And the super PAC Fair Share Action is headed by Wendy Wendlandt, who wears many hats as the president of Environment California, executive director of the 501(c)(4) Fair Share, senior vice president of the Public Interest Network, and former political director of US-PIRG.

And what about the League of Conservation Voters (LCV), a recipient of millions of dollars from the Public Interest Network’s super PACs?

As it turns out, LCV president Gene Karpinski served as executive director of US-PIRG for 21 years before joining LCV in 2006, while LCV senior vice president Tiernan Sittenfeld is a former lobbyist for US-PIRG.

In July 2018, Environment America even bragged about these connections following a $10 million donation through its super PAC to the LCV: “Key leaders of LCV, including Gene Karpinski, Tiernan Sittenfeld, Pete Maysmith, and others, worked over the course of three decades for organizations in The Public Interest Network.”

It’s the height of hypocrisy for multi-million-dollar “dark money” groups like the U.S. Public Interest Research Group and Environment America to shuffle funds from their super PACs to alumni and friends while arguing that “super PACs. . . should be illegal” with messages echoed word-for-word by dozens of US-PIRG’s state affiliates.

If Joe Ready and the Democracy for the People campaign want to stop the super PACs that are supposedly “undermining our democracy,” they should start by taking the axe to their own “dark money” operations instead of demanding the rest of America play by different rules.

Or they might just make their motto “PACs for me, but not for thee.”