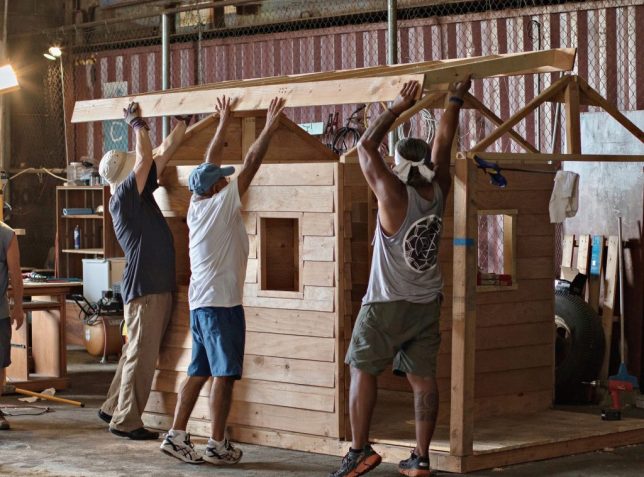 This article originally appeared in Philanthropy Daily on August 21, 2018.

Imagine that you’re a man in your seventies and eighties. Your wife has died, and she was not only your best friend, but also your only friend. You don’t feel like you have much purpose in life or belong anywhere anymore. So you’re alone and spend too much time sitting in your apartment staring at your TV. Wouldn’t your life be better if you had a place to go and something to do?

You might, in the future, spend your day at a men’s shed, making and repairing things and chatting with other men around your age. University of Delaware journalism professor Dawn Fallik discusses the global men’s shed movement in this Washington Post article.

I first heard of men’s sheds in a New York Times Magazine profile of Gerald Murnane. Murnane is a distinguished Australian novelist who many think is a strong candidate for a future Nobel Prize in Literature. But he’s also a single man in his late seventies who lives in a small Australian town hundreds of miles from a large city. So he spends his days at the men’s shed in his town working on crafts and being with other guys.

I gather the first men’s shed was created in the town of Albury, Australia in 1978. But from the website of the Australian Men’s Shed Association, I learned that many sheds stayed local until 2007, when they formed into a national organization. There are also men’s sheds associations in Ireland and in the United Kingdom.

Fallik interviewed Reg Flanigan, who spends his days at his shed in downtown Melbourne making “boomerang bags” or recyclable grocery bags. Flanigan’s wife died, and although he spends time visiting his children and grandchildren he still has a lot of time on his hands. Spending it in the men’s shed and learning how to use tools gives him a chance to meet people and learn new skills.

According to Philip Johnston of the U.S. Men’s Shed Association, there are 11 men’s sheds currently: four in Minnesota, three in Hawaii, two in Wisconsin, one in Michigan, and another one in Ohio.[1]

In Honolulu, the men’s shed was organized by Glenn Sears, 83, who was tired of spending days sitting at home in his condo. So he advertised on Craigslist for other people interested in opening a men’s shed. He found someone who offered a vacant warehouse for the shed, provided they could get rid of 28 tons of debris. “Sixty volunteers showed up with tools and jackhammers,” Fallik writes, and the shed was open for business, building outrigger canoes, repairing bikes, and teaching people how to use power tools.

When Glenn Sears spoke with us at Philanthropy Daily, he said their motto is that “men don’t talk face to face, they talk shoulder to shoulder.” It is often this simple insight that resonates with people new to the concept.

It should be noted that sheds are primarily men’s organizations, although some have voted to admit women. The idea is that men need a space to be with other men, and men usually have a hard time talking about feelings or medical conditions unless they’re involved in a project.

AARP chief medical officer Charlotte S. Yeh told Fallik “with men, they often identify with their job, and when they retire they think they are going to keep the same friends they’ve had in the workplace, but then they find they no longer share the same interests. Then they depend on their spouses to develop networks, but they may not have spouses, or that may not work out.”

Philip Johnston of the Men’s Shed in Minneapolis told Philanthropy Daily that when a new guy shows up at the shed, “we don’t all stand up and stare at him or ask too many questions.” Rather, the newcomer jumps right into the action of whatever project needs help. “One somewhat quiet guy started coming to our shed. He kept to himself for two or three months,” said Johnston, “until one day he came in and walked up to me. I thought he was gonna give me a handshake, but he went for a hug and said to me ‘thanks for giving me my life back.'”

The Australian government offers men’s sheds small grants, which are supplemented by dues. According to Fallik, dues alone fund the American sheds. The main shed in Hawaii has organized to be a nonprofit, but most other ones have not and rely on member dues and the generosity of those involved.

For a comparable organization to the Men’s Shed movement, look at the history of the Boys & Girls Club of America. This organization started with one club in 1860, and it wasn’t until 1906 that there were enough of them to form a national organization.

With 11 men’s sheds in the U.S. it seems too early to see if they will become a robust national organization. They’ll probably have to have lots of people in many cities struggle to organize clubs. But men’s sheds seem an interesting new idea—and one that might provide a great many lonely older men with a place to go and a purpose in life. As Phillip Johnston told Philanthropy Daily: “There’s a deep social isolation problem in America, and we’re out to help solve it.”