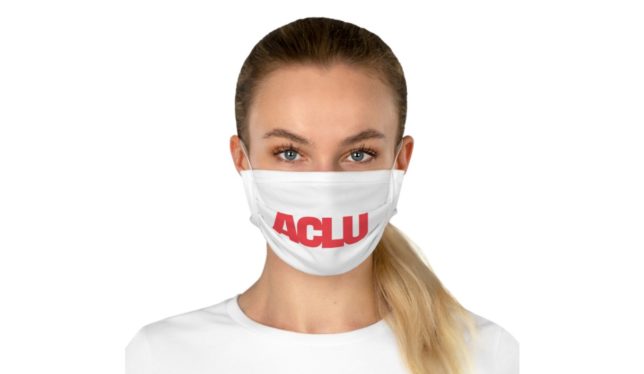 In a profound display of Orwellian doublespeak, the American Civil Liberties Union (ACLU) recently announced a lawsuit in favor of restricting civil liberties.

The lawsuit was filed against the state of South Carolina, where Gov. Henry McMaster recently issued an executive order prohibiting schools from requiring students to wear masks. The ACLU has long been an opponent of nearly any kind of compelled or mandated behavior in schools, recently suing a Tennessee school district for offering optional prayer before football games, but now the ACLU claims that forcing students to wear masks actually protects their civil liberties.

Many were confused by the decision. As one of the top responses on Twitter put it, “ACLU is suing . . . in favor of the government forcing people to do something?”

The ACLU argues that ordering schools to allow students a choice in wearing a mask is illegal and discriminatory toward the disabled. Thus, to file the lawsuit, the ACLU is working with two disability advocacy groups: Disability Rights South Carolina and Able South Carolina.

Both groups are funded almost entirely by the federal government.

Since both organizations receive vast amounts of federal funding, they are required to submit yearly audits to the IRS. These audits reveal that both organizations receive over 90 percent of their funding from federal grants. Disability Rights South Carolina’s 2020 audit does note, however, that it received a nongovernment grant of $15,000 from the Ford Foundation, which is well known for funding left-leaning activist groups.

Ironically, one of Disability Rights South Carolina’s largest grants during 2020 was a $235,000 grant from the Department of Education for the “Protection and Advocacy of Individual Rights (PAIR).”

Lawsuits in Other States

In Florida, federally funded groups are going after Gov. Ron DeSantis for his school mask policies. Earlier this month, lawyers with the Disability Independence Group, which has received about $1 million in federal grants, represented parents in a lawsuit against DeSantis’s ban on school mask requirements. Although the Disability Independence Group is much smaller than its counterparts, federal funding still constitutes a sizeable portion of its revenue.

Four groups in three different states filed extremely similar lawsuits against Republican governors for the same policies. And all of them are largely funded by the federal government. There seems to be a pattern emerging.

The Biden administration and its officials have been publicly feuding with Republican governors like DeSantis, Abbot, and McMaster for many months now over their refusal to comply with federal recommendations and mandates. Biden himself infamously told Gov. DeSantis to “get out of the way” of federal COVID-19 policies. Just this week, following earlier directives from Biden, the Department of Education opened a civil rights investigation into student mask-mandate prohibitions issued by Republican governors in Iowa, Oklahoma, South Carolina, Tennessee, and Utah. It is safe to say a serious political grudge has developed, and both sides are taking every opportunity to score political points on their opponent.

Regrettably, this animus appears to have also affected federally backed nonprofits, potentially turning them into political pawns in a media and legal circus.

The work that these organizations do is, overall, very good. Caring for the disabled is a true act of charity and should be encouraged and funded. But these organizations are also supposed to stay above petty political squabbles, and when politics bleeds through into their work—as it appears to have done—there is a serious problem.