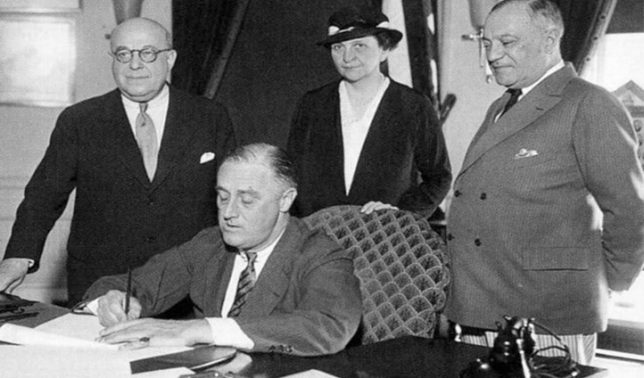 Due in part to the prominence of African Americans among farm laborers in the 1930s and the strength of segregationist Dixiecrats in President Roosevelt’s New Deal coalition, agricultural workers were excluded from the NLRA. While some states (most prominently California) have extended collective bargaining laws to farmworkers, the federal government has not.

The NLRB would go on to create a body of law expanding the NLRA’s application and implications for the U.S. economy through its prosecution and judgment of violations of the Act, known as “unfair labor practices.” The NLRB may also engage in regulatory rulemaking like a traditional arm of the executive branch.

The NLRB process is modeled on judicial procedure, but it is not a proper court system. NLRB cases are first heard by any of a series of administrative law judges (ALJs)—executive branch officials appointed to civil service-style positions by competitive examination. They are not Presidentially appointed Article III judges (the traditional federal judicial branch) or even Article I judges (special-jurisdiction legislative courts like the U.S. Bankruptcy Court) who rule on cases. Instead, NLRB ALJ decisions may be appealed to the five-member presidentially appointed board. By convention, the President’s political party is guaranteed a one-vote majority on the five-member final tribunal—though Senate partisanship means that the Board is often short of members and that the established partisan majority may not exist in practice. (As of May 2018, there is a one-vote Republican majority on the NLRB.) The President also appoints the head of the agency’s prosecutorial arm (the General Counsel).

This explicit partisan structure results in frequent reversals in applicable legal precedent. During the Obama administration, the NLRB overturned precedents which had stood for a combined 4,500 years, and the NLRB under Republican control is seeking to restore a number of those precedents. For example, NLRB General Counsel Peter Robb advised the Board to withdraw “ambush election” regulatory procedures approved under the Obama administration. The NLRB is likely to overturn the Obama-era rule, passed at the urging of unions who sought to shorten the timeframe for advising employees of the potential downsides of unionization. (For more on the Trump-era NLRB’s battles over precedents, see “Under New Management,” Capital Research, Issue 1, 2018.)

One of the reasons that the AFL was disappointed by the collective bargaining provisions of the old NIRA was that employers were able to arrange management-controlled “company unions” even when companies did not ignore the collective bargaining provisions entirely. To ensure that organized labor would be able to compel management to bargain, the Wagner Act required employers to bargain collectively with any organization of a majority of employees’ choosing—in practice, almost always a unit of a major national labor union.

The Wagner Act stipulated that a union would be formed for a so-called “bargaining unit” of employees in a similar-enough class of jobs if a simple majority supported the union. Under NLRA procedures, the union can demand (and in practice always demands) “exclusive representation” or “monopoly bargaining,” which compels all members of the bargaining unit to be negotiated for by the union if the simple majority support threshold is met.

The Wagner Act also prevented employers from controlling or interfering in the unions of their company’s employees; the provision has been interpreted to prohibit not only captive “company unions” but almost all non-adversarial employer-employee labor relations arrangements, most notably German-style “works councils.”

The Wagner Act also privileged striking, by guaranteeing the right of employees to “concerted activity” and protecting strikers from being fired. A court decision in 1938 gave employers the ability to hire replacement workers but held that strikers must be reinstated if new positions opened after the strike ended.

In the next installment of Empowering Labor, learn how pro-business politicians worked to reign in labor unions’ government granted priveledges.