Strategic Minerals: The Embarrassment of Riches 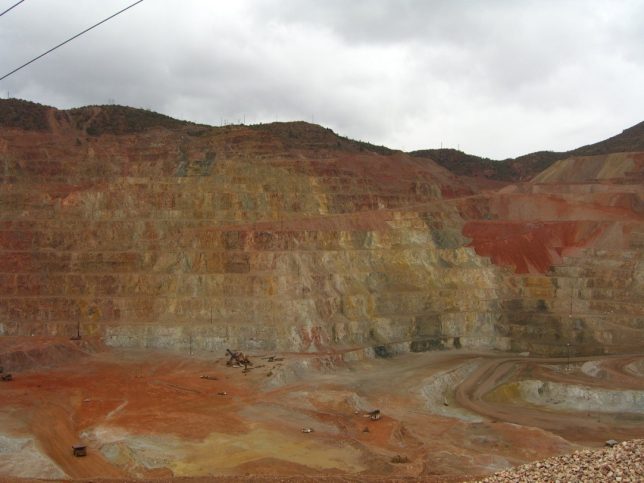 One of the largest mineralized regions on earth occurs in the geologic terrain extending from Colorado to the Pacific Ocean across the Western U.S., including Arizona’s Morenci mine. Credit: benketaro. License: https://goo.gl/FxMtXg
by Ned Mamula

Summary: The United States is a treasure trove of mineral resources. But restrictions placed by politicians, bureaucrats, and the courts have left the U.S. reliant on imports of critical and strategic minerals from adversarial countries like China. The result? Our economic future and our national security are at grave risk – and the worst is yet to come.

Despite having a vast reserve of mineral resources, the U.S. is dependent for minerals on the goodwill and cooperation of other nations, including China and Russia.

Why are we in this situation? The answer is simple: Over the past five decades, our mining industry has been crippled by poor stewardship on the part of the federal government and by severe restrictions imposed at the behest of the environmentalist movement. It’s the major reason that scores of mining companies have gone under and tens of thousands of American jobs have been lost.

By contrast, in recent years, with horizontal drilling and hydraulic fracturing (fracking), the oil and gas industry has prospered. New technology has presented us with the prospect of abundant energy, even energy independence—a seeming impossibility just a generation ago. Unfortunately, the story of strategic minerals has taken a very different and indeed sinister turn.

First, some definitions: The broad term “minerals” captures a variety of elemental metals, compounds, and exotic substances which provide the building blocks of today’s technologies and economies. Collectively, minerals are essential to the manufacture of almost everything including household items, buildings, cars, trucks, energy equipment, medical devices, electronics, cell phones, agricultural products, and a wide range of essential goods, central to the economy. Minerals deemed key to the economy are termed “critical.” Those necessary for national defense and military operations are termed “strategic.”

As recently as 1990, the U.S. was the world’s largest producer of minerals. However, in the past thirty years or so, quite a different trend has emerged.

According to the latest data from the U.S. Geological Survey (USGS), the U.S. is now 100 percent import-dependent for at least 20 critical and strategic minerals, not counting the individual “rare earths.” (The rare earths are a group of 17 elements, used in devices ranging from magnets to lasers, that the USGS groups together in one category.) We’re also between 50 and 99 percent import-dependent for another group of 30 key minerals.

According to the latest data from the U.S. Geological Survey (USGS), the U.S. is now 100 percent import-dependent for at least 20 critical and strategic minerals.

All told, the nation is more than 50 percent import-dependent for at least 50 key minerals—more, if you count rare earths separately. This trend of increasing imports and decreasing domestic mineral production is currently worsening. In its annual Mineral Commodity Summary for 2016 published earlier this year, the USGS notes:

Several U.S. metal mines and processing facilities were idled or closed permanently in 2016, including iron ore mines in Michigan and Minnesota; three primary aluminum smelters in Indiana, Missouri, and Washington; one secondary zinc smelter in North Carolina; a titanium sponge facility in Utah, the only such facility in the United States; and titanium mineral operations in Virginia.

Domestic trends aside, minerals are needed for virtually everything technological. The industries that rely on minerals such as construction and manufacturing contributed $2.78 trillion to the domestic economy, or nearly 15 percent of gross domestic product (GDP)—a statistic reported by the Office of Management and Budget (OMB). On that basis alone, boosting U.S. minerals production should rank among the highest policy priorities of the Trump administration, but so far there is no priority status for minerals.

Lack of sufficient U.S. mineral production is not the fault of mineral-poor geology in the Americas. Quite the opposite, here we enjoy a geological abundance. Our artificial shortfall is the product of defective government policy. Elements of our existing policy have gradually morphed into a leave-it-in-the-ground mentality, backed by a liberal environmentalist lobby with strong support in Congress, the bureaucracy, the news media, and Hollywood.

A great irony is that the mining the environmentalists and their allies oppose is necessary to provide minerals and metals for the “green revolution” they support. Those same minerals and metals also drive the technology revolution. They are critical for the national defense and for rebuilding America’s infrastructure. And without them we are reliant on countries that, to put it mildly, don’t have Americans’ best interests at heart.

Of the top 50 key minerals imported into the U.S., 28 are imported from China and six are imported from Russia. That’s a total from those two countries of 34 out of 50 vital minerals needed for U.S. economic health and national security. Both countries have effectively used their mineral export dominance as diplomatic and trade weapons in the recent past.

This presents a straightforward challenge to policymakers: If one or more foreign suppliers should decide to limit exports of a key mineral, can the U.S. adapt? Probably not. The dependency runs too deep, and the permitting and extraction process moves too slowly; it takes at least a decade to develop a new mine.

An “America First” policy on minerals would (1) provide better access to public lands that contain mineral deposits or are geologically favorable to hosting ore deposits, and (2) streamline the environmental permitting for mining, as has been done in other major mining countries such as Canada and Australia.

Planning for the mineral production necessary to economic expansion and the rebuilding of America’s infrastructure will require a 180-degree about-face from our current mineral policies. Can the U.S. begin playing the long game with its mineral resource wealth, as China has done successfully for decades?

For the first 150 years of its existence, the mineral-rich U.S. was largely self-sufficient, with a surplus minerals trade balance. That enormous mineral wealth was derived largely from public lands in the Western states.

Today, access to large parts of those federal lands has been eliminated or severely restricted. Regarding key minerals, the American people are being denied their endowment.

One of the largest mineralized regions on earth occurs in the geologic terrain extending from Colorado to the Pacific Ocean across the Western U.S. According to USGS reports, this mineral belt contains world-class deposits of antimony, arsenic, chromium, cobalt, copper, fluorine, gold, iron, lead, manganese, mercury, molybdenum, nickel, platinum, silver, tin, titanium, tungsten, uranium, vanadium, and zinc—many of which are critical and strategically important.

According to the latest data from the U.S. Geological Survey (USGS), the U.S. is now 100 percent import-dependent for at least 20 critical and strategic minerals.

Abundant concentrations of minerals over such a vast area make our western “mineral belt” almost unique compared to other such geological features on the earth. Some of the largest mines in the world—Colorado’s Climax molybdenum mine, Alaska’s Red Dog lead-zinc mine, the Nevada’s Newmont and Cortez gold mines, Arizona’s Morenci copper mine, and the Greens Creek polymetallic mine in Alaska—can be found in this belt.

The USGS has also compiled lists of hundreds of major mineral deposits in the belt, along with thousands of lesser mineral “occurrences,” which are indicative of ore deposits. Well over a thousand of these occurrences are thought to be significant; most remain unexplored. Presently, a preponderance of the mineral resources and mining in the U.S. are associated with a small number of major deposits.

Current USGS assessments of deposits of the most valuable metals—iron, aluminum, gold, silver, copper, lead, and zinc—indicate that various as-yet unexploited deposits of these metals will dwarf the totals of all previous production. Good news: there is virtually no end to the mineral wealth. Bad news: there may be no access to these minerals.

In the next installment of “Strategic Minerals,” we investigate how poor regulations forced America to become disastrously reliant on mineral imports.