Elon Musk, the Omicron Puppy, and Satire That May Save Twitter 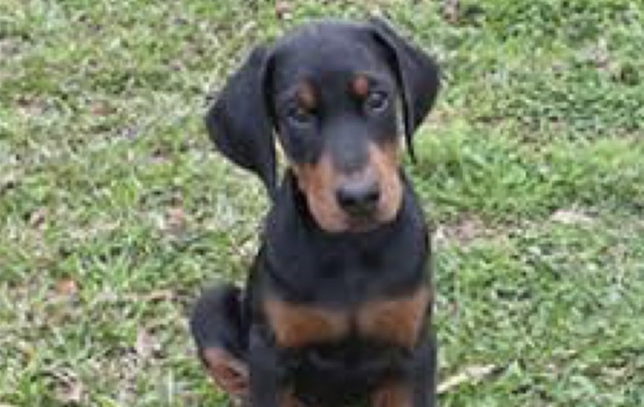 Ruth, the dog that @LiberalDogMom (a satirical Twitter account) said she euthanized for fear of catching Omicron. Much outrage ensued. Dog was not harmed and may never have existed. Source: @LiberalDogMom.
by Ken Braun

October 14, 2020, is the day when Twitter and Facebook definitively ceased to be free-expression platforms, instead uniting to deny access to the New York Post’s entirely true story about the alarming contents of Hunter Biden’s laptop. They told us the truth was probably Putin’s propaganda and that an organized political disinformation campaign was instead the truth.

They became organized liars, private-sector purveyors of the motto on George Orwell’s creepy Ministry of Truth: “War Is Peace, Freedom Is Slavery, Innocence Is Strength.”

March 25 of this year, the day Elon Musk began hinting of a Twitter takeover, could one day be thought of as a liberation event if Musk rights the ship.

Or an earlier date could be December 30, 2021, when Twitter user Linda Mackey (@LiberalDogMom) showed how killing a puppy could win over a couple of thousand new followers.

Next to a photo of an adorable puppy, Linda attached the following:

Vet confirmed the worst. Ruth tested positive for omicron. I made the decision to have her put down. I loved her but no way was I going to let her infect me and possibly kill me! Rest in Peace, little girl. 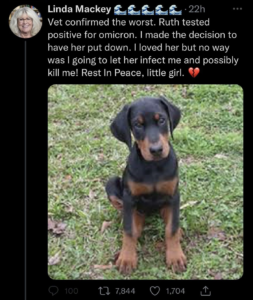 This is one of the remnants of the angry responses to the since-deleted post:

This person is Fauci’s most loyal follower. Buys into the Omicron fear mongering and kills this sweet puppy. Fauci would be proud @LiberalDogMom. This person should be charged with animal abuse.

But thousands of new follows to the account recognized the ruse. @LiberalDogMom is a satire account. “Ruth” the cute puppy is fine, though she may never have existed at all.

Elon or no Elon, users such as Linda may be what saves Twitter from its own employees.

In a November 2021 post (a month prior to the fateful euthanizing of the Omicron Puppy) “Linda” broke character to explain the agenda: “This is a page where both leftists and the right can make fun of liberal hypocrisy.”

In March, Linda revealed that her voice was really that of a left-leaning guy disgusted with blindly loyal partisan Democrats.

Despite these many clues and having clearly labeled the account as parody from its inception in July 2021, Linda’s posts continue to suck in unwary culture warriors who still don’t get it.

Linda’s creator must have decided the easily fooled and offended needed a hero of their own, so in March he conjured up “Jefferson Mackey,” supposedly Linda’s Trump-loving ex-husband. The two erstwhile lovers began a day or so of trading faux hateful and hilarious insults, with both the witting and unwitting audience joining in the dispute.

And then . . . Jefferson got locked out, accused of violating “Twitter rules” following an allegedly “careful review.” Within a couple of weeks Jefferson was forgiven his sins against the Twitter staff and reinstated. Then on April 20, he got booted out again!

Why does he get bounced while Linda gets to stay?

Linda is a convincing parody of the woke Left, so naturally the easiest marks for her gags turn out to be conservatives who can’t get beyond their confirmation bias. Jefferson, predictably, is the mirror image, more likely to irritate the other side.

On woke Twitter, Linda can get away with senselessly euthanizing puppies, repeatedly boasting of having an abortion after eight months because she and Jefferson agreed “4 kids was already too many,” saying vicious things about evil conservative Jefferson, and portraying a long list of other edgy, insulting, and outrageous positions.

Jefferson? He’s on a shorter leash. Every day the people doing the “careful review” at Twitter reflexively get rid of real people just a little less weird than Jefferson, yet every bit as conservative. Since the Twitter moderators either could not read or otherwise did not read the #satire hashtag on Jefferson’s profile, there likely wasn’t a “careful review” of anything about him at all. Jefferson got reported to the principal’s office for saying something that hurt somebody’s feelings, so off he went.

The Babylon Bee Is Fake?

Three days earlier, the Twitter bureaucracy had bounced the obviously satirical and far more famous Babylon Bee from the platform.

An “in on the joke” follower of Liberal Dog Mom warned her earlier in March not to read the Bee because it was “not real news” and “they just seem to post hit pieces that make fun of liberals.”

Linda shot back a self-referentially ironic reply: “Thank you for telling me this. I won’t be following @TheBabylonBee anymore. What kind of SICKOS would make fun of liberals????”

The very morning of Jefferson’s first ouster and likely in response to the Babylon Bee removal, Elon Musk posted a poll: “Free speech is essential to a functioning democracy. Do you believe Twitter rigorously adheres to this principle?”

Musk cryptically hinted at what his question was aiming at: “The consequences of this poll will be important. Please vote carefully.”

On the account where he speaks out of character and as himself, Linda’s still disgruntled creator reposted the Musk poll with his own analysis:

I think unless something truly innovative comes along we are stuck with the platforms we’ve got. Every “free speech” social media alternative site just becomes a right wing community because most on the left don’t mind how it is on the main social media sites.

True enough, but maybe it’s not as hopeless as that. Many other satirical Twitter accounts are rapidly winning converts and popularity. They could make a difference whether they have Musk’s help or not.

A far more popular parody page on Twitter doesn’t even bother with a #satire hashtag. “Three Year Letterman” (@3yearletterman) has nearly 280,000 followers looking on to watch the portrayal of an egotistical dumb jock and jingoistic American nationalist.

Typical post from Three Year Letterman: “232 years ago today, the world said goodbye to a hero, a president, and the man who invented electricity, currency, and freedom. Thank you, President Franklin, for making America the oldest and greatest country on earth. We miss you.”

A typical reply from a humorless lefty: “A few things: He didn’t “invent” any of those things. He was never President. We are not the oldest country. . . . @KenBurns has a documentary you should watch.”

Then THE Ken Burns responded: “I’ve got a documentary for you to watch on @PBS.”

Then the self-important Three Year declared he was “Educating Ken Burns too.”

Did the famous director know he was part of the ruse? It probably didn’t matter. Three Year Letterman proudly boasts of ticking off and being blocked by many other celebrities on Twitter, such as conservative commentator Candace Owens and left-leaning climate alarmist Michael Mann.

Three Year Letterman is not afraid to offend. Challenge him on anything, such as obvious evidence that another nation has done something—anything—sooner or better than the United States, and he is apt to point out that the nation at issue is so clearly inferior that it has never won a single SEC football championship. Or he might impolitely remind you that Vienna is actually the capital of Australia, and that you’re an idiot to say otherwise.

There must be an incalculable number of less famous people who failed to recognize his satire, got upset and blocked Three Year, and they maybe even reported him as a violator of the sacred “Twitter Rules.” On April 20, Twitter warned him about using “potentially harmful or offensive language” and advising that “Most Tweeters don’t post replies like this.” Predictably, he posted the warning so as to lampoon it.

How does this serial offender of so many users survive a “careful review” of whether he violated the “Twitter rules”? And what happens when, as seems to be happening now, there are more and more satire accounts just like him (plus their fans) engaging and enjoying Twitter each day?

Trouble for the Woke Police

Pulling off the Hunter Biden laptop incident was comparatively easy. It was just thoughtless power deployed against news Twitter didn’t like. Finding and hiring a small army of content cops to push the kill switch on particular political arguments is simple, so long as the Twitter audience will put up with it.

But this doesn’t work so well in a growing minefield of satire accounts and the people who interact with them. Twitter can’t cancel everyone.

Negotiating through it all would require staffers smart enough to appreciate and excuse the humor, but Maoist enough to enjoy being professional control freaks. That small subset of the population already apparently doesn’t include people such as Candace Owens or Michael Mann.

If Twitter can’t find these instinctive meddlers, then it will thoughtlessly shut down and drive away a larger and larger circle of people who engage with the satire and harm nobody. These are users the business side of Twitter needs to keep paying those content cops.

The lockout of Jefferson Mackey is an indication that this crossover point may have already been breached. If that’s true, then the healthy options available for the Twitter board are “cut it out” or sell to someone who will stop it for you.

Otherwise, there’s room in the digital trashcan next to MySpace. Sure, it will probably take a bit for mighty Twitter to land there. But it will be a quiet fall, and the only people who will care when it hits are the stockholders still invested in it.