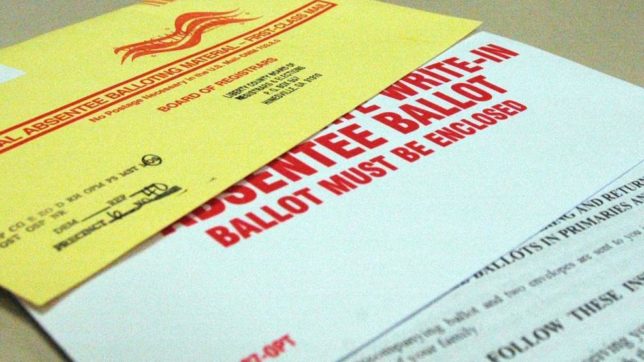 On Tuesday, Michigan Secretary of State Jocelyn Benson announced that each of the state’s 7.7 million registered voters will receive an absentee ballot application for the November 2020 general election. This is a brand-new policy with an anticipated upcharge of $4.5 million, to be drawn from $3 billion in federal COVID-19 relief money recently shipped to the state and supposedly to be used only for pandemic-related emergency purchases.

Benson’s office justifies this new spending as necessary to protect voters who fear they might otherwise violate social distancing guidelines at a polling place on Election Day.

This is nonsense. Benson’s own website already provides the option for voters to fill out and mail in an absentee ballot application under the state’s recently enacted “no reason” absentee voting law. Anyone concerned about their physical space could already complete the entire process, including voting, from their dining room table. They can also go into a city or township office before Election Day and cast an absentee ballot, as I have done for just about every Michigan election for two decades.

A Million Here, a Million There

Benson is not addressing a real emergency, and there is no reason to spend the $4.5 million. But hey, since she is spending that federal magic money, not state tax dollars, maybe we should ask “What could go wrong?”

First, Michigan’s state budget is currently $3 billion in the red (and climbing) because of pandemic-related business shutdowns, so the secretary of state is creating new spending on a brand-new program when the state (which includes her office) already can’t pay for existing programs. Second, if that first item raises a question about Benson’s competence, then consider also that she ran for the job promising shorter wait times at secretary-of-state branch offices, yet in short order managed to make the lines “significantly longer.”

In other words, if you have ever had a new employee at your workplace who was unable to get the hang of the job, but instead kept trying to do everyone else’s work, then you’ve already met Jocelyn Benson.

Then there is the concern about ballot security. Republicans argue that increasing vote by mail increases the risk of ballots being lost, improperly cast, or otherwise compromised. Democrats argue there is nothing to worry about.

So, here is a fun test of these assertions: Enter the name of your state in a Google search bar and then add the terms “postal” and “sentenced.” For Michigan, these are just a few recent highlights:

To be sure, these cases are selected carefully from only the past year or so and involve only clear cases of mail stolen by postal employees. Not included are recent crimes such as other people stealing the mail (Kalamazoo, Michigan, March 2020) or a postal union official embezzling union funds (Benton Harbor, Michigan, November 2019).

Also excluded is the March 2019 story about Michigan postal thefts over just a four-month period showing 5,000 Amazon packages were stolen, along with almost 300 credit cards, 140 checks, and 60 medications. This story said postal inspectors were “overwhelmed investigating the number of thefts.”

An obvious lack of common sense is feeding this crime wave. Many—but sadly not all—of us are smart enough not to trust cash or anything of real value to the post office. There are rare instances, of course, when this risk is unavoidable. But wherever possible we should also consider our ballots to be “items of value” and the mailbox as a worst-case option for casting them.