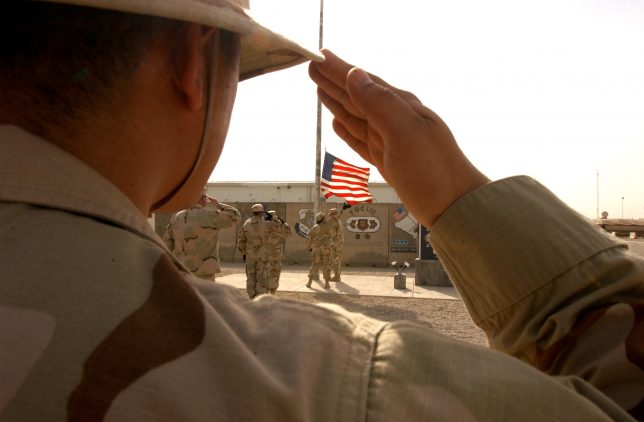 A member of the 407th Air Expeditionary Group renders a salute during a retreat ceremony as the base honor guard lowers the colors on June 3rd, 2006, while deployed to Ali Base, Iraq. (U.S. Air Force photo by Staff Sgt. Jonathan Pomeroy) (RELEASED)
by Martin Morse Wooster

This article originally published by Philanthropy Daily on November 12, 2018.

What are the best ways for donors to help veterans?  The Philanthropy Roundtable published Uniform Champions, by Thomas Meyer, who directs veterans’ programs for the Roundtable.  The guidebook, which is available for free as a PDF here, has a good deal of interesting reporting on ways donors are coming up with programs that help veterans succeed in life.

In a preface, Christian Anschutz, a director of the Anschutz Foundation, suggests that a fundamental principle for donors is to come up with ways to be helpful that do not encourage or foster dependency.  “If donors or nonprofits simply give things to veterans instead of challenging them or helping them to become their best selves,” he writes, “these young men and women are at the risk of becoming dependents, or languishing well below their potential—just like anyone else who is told he is entitled, or broken, or not responsible for his life.  Donors who want veterans to thrive should help them become self-reliant.”

Because the VA receives so little attention, most civilian readers have far less knowledge of the agency’s rules than they would of, say, Social Security disability programs. Meyer should have spent more time explaining VA practices to outside observers.

A crucial example concerns the methods by which the Department of Veterans Affairs rates a veteran as disabled. Spending on disabled veterans rose, in constant 2016 dollars, from $21 billion to $77 billion between 2001-2016.  In 2013 the department, for the first time, spent more on disabled veterans than on medical care for non-disabled veterans.

Meyer argues that the way the government determines if a veteran is disabled “uses WWII-era labor market expectations to send monthly checks to veterans based on antiquated and unchanging medical diagnoses, creating perverse incentives that discourage recovery, employment, and independence among the injured.”

The Philanthropy Roundtable, with grants from the Anschutz, Milbank, Arnold, Wilf Family, Morgridge Family, Bradley, Weinberg, Diana Davis Spencer, and Kovner Foundations and the Daniels Fund, has created the Independence Project to come up with ways that federal disability programs for veterans can be reformed.

Meyer also tries to keep his book free of politics.  That’s understandable, but in doing so he elides over political explanations for behavior that seems unusual.

For example, he has one chapter discussing efforts by the Ahmanson Foundation to aid colleges in recruiting veterans.  The foundation has created the Ahmanson Veteran Scholarship Initiative, which gives $70,000-100,000 grants to two dozen California colleges and universities to help them recruit veterans, with the goal of having each school have one more veteran enter a class each year than in the past.

Meyer offers many reasons why colleges are wary of admitting veterans.  Some don’t like the idea of having freshmen who are older than many seniors.  Others won’t accept credit for skills veterans learn on duty, even though, for example, the foreign language courses held by the Army’s Defense Language Institute are as good as and probably better than those offered by most universities.

But Meyer doesn’t admit to a fundamental reason why schools such as Princeton, Duke, and Harvard only have five or fewer veterans:  their admissions officers are firmly anti-military.  Of course, schools won’t admit this, but Meyer could have made the point.

Uniform Champions has 11 case studies of donors that have come up with interesting, innovative ways to help veterans, with a concluding chapter on the creation of the Independence Project.

Perhaps the most interesting case study is that of New York City donor Steve Cohen’s efforts to help veterans with post-traumatic stress disorder (PTSD).  He created the Cohen Veterans Network and Cohen Veterans Bioscience to help veterans with stress-related disorders by creating five new clinics and convening meetings of neuroscientists to determine what we do and don’t know about PTSD.

He concluded that, at most, 20 percent of vets who went to his clinics were suffering from PTSD.  The scientists told Cohen that there is a great deal we don’t know about PTSD, including what it is exactly, since “doctors must rely on self-reported symptoms that are difficult to verify and are often separate from other medical conditions.”  Moreover, “stress disorders are too fuzzy, subjective, and risky to attract much pharmaceutical investment.” So Cohen has given grants to leading organizations (such as MIT’s Broad Institute) to find ways to more precisely define PTSD and come up with new drugs that could be helpful.

Other case studies in this book include:

“We hope that the sterling givers profiled in this book,” Meyer concludes, “inspire you to make your own mark on the field.”