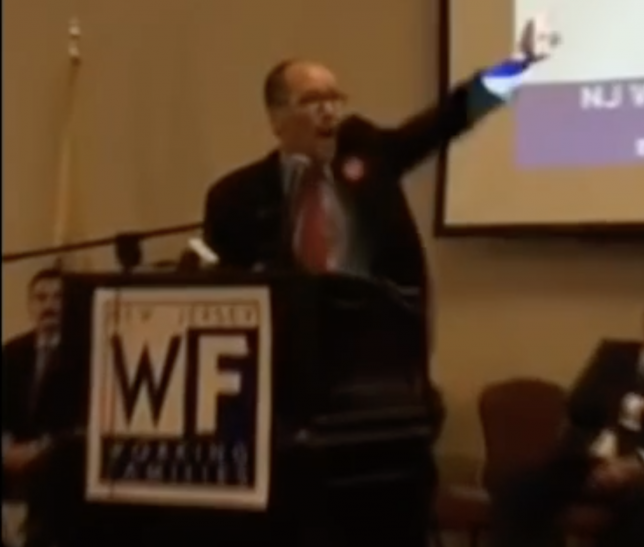 Last week, the New Jersey Working Families Alliance sponsored an event branded as the “We Build the Resistance Rally,” which featured several prominent Democratic Party officials and which was intended to “fight back and the build the movement” against the current Republican-led administration.

Among the influential speakers was Democratic National Committee chairman Tom Perez, whose remarks are now offering the country a glimpse into the newly elected DNC chief’s attitude toward the Republican Congress and Trump administration, as well as a taste of what to expect from Perez’s leadership.

As Christian Datoc of The Daily Caller earlier reported, at the Friday event Perez “congratulated reporters on showing up in droves to Washington, D.C. on January 21, the day after President Trump’s inauguration.” According to the video accompanying the article (embedded  below), Perez proclaimed (much to the crowd’s approval), “Donald Trump, you didn’t win this election!” And as for the Republican Party? “Republicans don’t give a s**t about people.”

The chairman’s remarks should be unsurprising to those who are familiar with the Left’s efforts to tear down Republican leadership. As Capital Research Center’s body of research on Chairman Perez and the Working Families Party, this type of obnoxious, in-your-face response is to be expected.

Tom Perez’s history of racialized decision-making at the Department of Justice further politicized an already tarnished executive agency, and his actions at the Department of Labor have added untold costs to small businesses and burdened our nation’s economy while benefiting his union allies.

As early as 2009, CRC was tracking the illegal activities of the Working Families Party, the sponsor of last week’s event. The organization’s list of misdeeds includes forging signatures on absentee ballots, a well-worn practice of the Association of Community Organizations for Reform Now (ACORN), and for which four pleaded guilty in 2011.

The Working Families Party is not only using Chairman Perez as a launching pad for its agenda. As reported in May 2015, the WFP has been highly involved in propping up Senator Elizabeth Warren as the next Democratic candidate for president of the United States.

Warren’s wholly speculative candidacy has been going gangbusters. Democracy for America, MoveOn, and the ACORN-affiliated Working Families Party of New York have been raising money, carrying out polls, hosting events, opening offices, and hiring employees in key states “with the express purpose of showing Warren that an infrastructure exists should she discover her presidential aspirations.”

Sen. Warren’s candidacy would be the silver bullet for WFP’s agenda, as its New York State director, Bill Lipton, said: “The only thing better than watching Elizabeth Warren take Wall Street to task from the Senate would be helping her bring our issues to the center of the national debate.”

As the network of leftist organizers and Democratic Party elites is demonstrating, the Left is staging a countrywide assault on Republican leadership, and they’re using their largest political weapons available, including potential candidates for the Oval Office.

To find out more about the Working Families Party, read our articles here.