Did the Center for Voter Information Intervene Illegally in the 2020 Election? 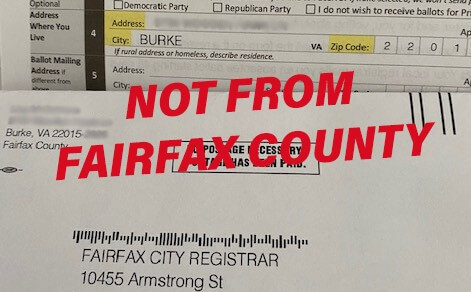 Voters in numerous states were assailed with pre-filled absentee ballot applications in the months leading up to the 2020 election from the Center for Voter Information (CVI), a shadowy 501(c)(4) advocacy group headquartered in Washington, DC. Many of these absentee ballot applications were faulty, listing the wrong jurisdictions. In Virginia, mailing applications mislabeled for the City of Fairfax were sent to residents of neighboring Fairfax County. But the ballots faults, they were clearly sent for one purpose: flood key states with tens of millions of mail-in ballots.

But what if they were also meant to help fraudsters steal the election?

It’s no secret that in the lead-up to the November 3 election Democratic presidential nominee Joe Biden’s campaign was relying on an ocean of mail-in ballots to overcome strong turnout among Republican voters on Election Day. Leftist groups have said as much practically since the COVID-19 lockdowns began. The Brennan Center, a leading vote-by-mail advocate, called for a staggering $2 billion from Congress to fund the scheme in April.

CVI and its “sister,” the Voter Participation Center (VPC), are counted among the professional Left’s leading get-out-the-vote operations. They were formed in 2003 by Page Gardner, a former Bill Clinton campaign staffer and Democratic operative. And they have grown rapidly since: Between 2017 and 2018, CVI’s revenues grew from $1.1 million to $19 million, and PVC’s revenues grew from $4.5 million to $26.3 million, suggesting huge investments by undisclosed left-wing mega-donors.

While nonprofits are allowed by the IRS to engage in nonpartisan voter registration, calling Gardner’s groups “nonpartisan”—not favoring either political party—would be a stretch given that many of their past campaigns exclusively targeted “unmarried women, millennials, [and] minorities”—all likely Democratic constituencies—and that CVI spent $533,820 bolstering Biden’s 2020 campaign.

Like other leftist groups, CVI and VPC took advantage of the COVID-19 pandemic to transform America’s election system into a vote-by-mail nightmare. Besides turning Election Day into Election Month, the flood of millions of mail-in ballots opened the door to unprecedented fraud. There’s a reason a Jimmy Carter–led bipartisan commission in 2005 called mailed-in absentee ballots the “largest source of potential voter fraud” and that most countries in the European Union have banned “postal voting” over the same concerns.

Add to that reports from all over the country of voters who tried to vote on Election Day and were told that they couldn’t cast a ballot because they had already voted. Who voted for them?

One Virginia polling place worker who wishes to remain anonymous sent CRC a copy of an envelope (archived here) mailed to him by CVI prior to the election containing an absentee ballot request, but the return address (3125 W. Cary St. #305, Richmond, VA) is a UPS store, not CVI’s Washington office. He has found similar envelopes in eight other states—Pennsylvania, Georgia, Nevada, Ohio, Wisconsin, North Carolina, New Mexico, and Missouri—with return addresses for UPS stores (see addresses listed below). This poll worker believes CVI (or someone close to CVI) generated a list of missing voters from the absentee ballot requests returned to these mailboxes to vote early for them.

For the time being that remains speculation. But it raises serious questions about tax-exempt nonprofits exploiting IRS rules to engage in political activity.

Some obvious changes to the law and rules would help reduce the potential for voter fraud:

First, prohibit any nonprofit (and other nongovernmental entities) from sending out absentee ballot requests. Voting is inherently political, not charitable—why should the mechanism of voting be considered any different? Ballots should remain the exclusive purview of elections officials, not “charitable” nonprofits.

Second, exclude nonprofits from voter registration, which is often a fundamentally partisan activity that’s exploited extensively by the Left. It’s leftists, not conservatives, who consider tax breaks equivalent to a federal subsidy, so by liberal logic the public is subsidizing the Left’s get-out-the-vote operations.

Third, prohibit outside funding of state election infrastructure. If the tens of millions of dollars CRC has tracked from Mark Zuckerberg to elections boards in battleground states are any indication, the 2020 election was a test by lefty billionaires to see how much they can manipulate voter turnout precisely where Democrats need it (e.g., Atlanta, Milwaukee, Detroit, and Philadelphia).

This isn’t the last the nation will hear from the Center for Voter Information, which has announced “a massive campaign” of 1.8 million vote-by-mail mailings “to increase voter turnout ahead of Georgia’s January Senate runoff elections.”

By hook or by crook the Left is determined to win. Don’t expect America’s elections to get any cleaner under leftist rule.