Did Marxists Invent the “War on Hate?” 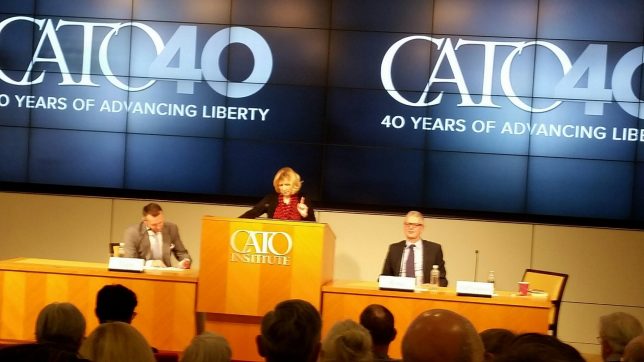 Far-left fanatics on college campuses may claim to support new social theories in their pursuit of social justice, but they’re often chasing Marxism by another name.

On November 28, the Cato Institute hosted a policy forum in Washington, D.C., that drew a line connecting the communist Soviet Union with the modern Left’s doctrine of “intersectionality,” the social theory responsible for much of the fanaticism afflicting American college campuses.

The intersectionality theory holds that there are formal categories of hate—sex, race, class, etc.—and they overlap into institutionalized oppression.

The forum, entitled “Marxist Origins of Hate-Speech Legislation and Political Correctness,” featured the American Enterprise Institute resident scholar Christina Hoff Sommers and Cato Institute Senior Fellow Flemming Rose. Over the course of the forum, the scholars revealed how Western intellectuals rebranded Marxism as social egalitarianism, minimizing its economic elements, after the USSR lost moral credibility in the West at the beginning of the Cold War. But Marxists never relinquished their animosity toward the so-called “bourgeoisie.”

Sommers jokingly began her address by thanking the Cato Institute for providing a “safe space” for freedom of expression.

“When future historians look back and try to understand what the hell happened to American campuses in the second decade of the 21st century,” she said, “they are going to find the real culprit to be a theory; and it’s called intersectionality.”

The intersectionality theory dates back to the 1970s (though it wasn’t coined until 1989), and the beginnings of “privileges” in ethnicity and gender. For instance, theorists might argue that a white woman is privileged by her race, but disadvantaged by her gender. Minority women “would be in double jeopardy” – disadvantaged by both their race and gender.

Although the theory began with a focus on black women, the number of apparently “victimized” groups quickly multiplied. Sommers said she attended a feminist conference which divided the women based on their “grievances and healing needs.”

There were groups for black women, Asian women, Jewish women, fat women, gay women. None of the groups proved stable. People started quarreling, and so there was, like, a black lesbian group—the Jewish women started a fight—some wanted to celebrate their religion, others wanted to overcome it. There was just this continuous process of mitosis.

I eventually ended up bonding with a group of lesbian separatists.

“I wasn’t a smoker, but I needed a cigarette,” she said to audience laughter, “And they smoked!”

Sommers, who regards herself as a classical “equity feminist” contrasted her feminism, which grew out of the Enlightenment, to this new form of feminism, which she said “came straight out of Marxism via the Frankfurt School, via French philosophers, and maybe a little of the self-esteem movement.”

“If you’re committed to this theory, you’re not going to worry about niceties like free expression,” she added. “You’re on an urgent mission to dismantle a lethal system of oppression.”

Sommers also reminded the audience of a recent incident at Reed College, where a group of students protested and shut down a class because the lesbian professor’s teaching of the ancient Greek poet Sappho was insufficiently intersectional. She recounted another experience at Oberlin College, where “30 women and a therapy dog fled to a safe room” to escape her presence.

“I feel bad for that dog,” she added.

Sommers pointed out that the main difference between Bolsheviks and intersectionalists is that the latter don’t have the power to put people in prison. If they did, though, they would likely put her in prison, as well as many other dissenters.

Too many textbooks and professors indoctrinate students to believe that levels of oppression exist in society, based on marginalized identities. This leads to so-called “microaggressions,” supposed slights made by the upper echelons of the intersectionality food chain against those at the bottom to remind them of their inferior status. This creates an environment where all students, regardless of their gender or ethnicity, can now feel equally oppressed because the possibility of victimhood mitosis is endless.

Sommers marvels at how most students “don’t seem to flinch” when they hear professors damning the United States as an imperialist, oppressive power. “I might be paranoid,” she said, but she suspects students hear this theory in high school and become conditioned to believe this when they arrive at college. During the question and answer session, a mother from Alexandria, Virginia, confirmed that indoctrination does begin in high school, noting that her children’s school heavily emphasizes the theory of intersectionality – marketing it as a celebration of “diversity.”

Sommers said that defeating this Marxist-inspired theory will require liberals to combat it because most of the criticism so far has come from conservatives. “But there just aren’t that many conservative professors,” she lamented.

Back (from) the USSR?

Cato Senior Fellow Flemming Rose drew a compelling comparison between the USSR’s crackdown on the dissension it called “hate speech” and “fake news,” and the modern trend in Western democracies to censor free speech online. He noted that “every liberal democracy, except [the] United States, has hate speech laws on the books, and the global trend is toward a tougher application of these laws.” He recounted how the basis for these hate speech laws’ spreading to Western democracies began with Stalin and the Soviet Union’s supporting them through the United Nations after World War II.

Rose pointed to Article 20, Paragraph 2 of the UN’s Covenant of Political and Civil Rights (1966). “The Soviet Union defeated the Western countries in the wording of Article 20, Paragraph 2,” he said, “and the repercussions of that defeat can still be felt in the West.” The fundamental disagreement between the democratic West and the communist East centered on how far the criminalization of speech should go. The U.S. and its allies supported language that mirrored the Supreme Court’s interpretation of the First Amendment. In the end, however, the Soviets won, and the final draft’s language advocated the criminalization of any speech that constitutes “incitement to discrimination, hostility, or violence.” Rose noted that the Western democracies that have enacted Soviet-style hate speech legislation of their own, have done so since the fall of the Berlin Wall.

Although their intentions may be more noble than the intentions of the Soviet Union, the European states that sixty years ago found hate speech laws dangerous and arbitrary have today become active proponents of such laws.

Addressing the crackdown on “fake news,” Rose pointed out that Vladimir Lenin began the censorship of media on his second day in power. Lenin’s justification? The press was owned by the wealthy class and their wealth allowed them to “poison people’s minds and sow confusion through slanderous distortion of facts.” Rose said that the Soviet experiment should give anyone “cause for pause” when it comes to using censorship to eliminate supposedly “fake news.” He pointed out that the Soviet penal code mandated sending violators of the media crackdown to labor camps.

Rose compared the Soviet crackdown with the modern sentiment of modern European Union leaders. Germany’s Minister of Justice, Heiko Maas, said in defense of his country’s crackdown on Facebook earlier this year that “defamation and malicious gossip are not covered under freedom of speech. . . . Anyone who tries to manipulate the political discussion needs to be aware of the consequences.” Italy’s antitrust chief Giovanni Pitruzzella said, “Post-truth in politics is one of the drivers of populism and it is one of the threats to our democracies.”

“Soviet censors would have applauded this kind of argumentation,” Rose said.

Rose credits utopianism for the push for hate speech laws, saying, “They believe if we eradicate hate, then eternal peace will arrive, and everything will be great.” Although hate is not a very constructive emotion, it sometimes “makes sense.” He noted that he recently learned that the emotions of hate and love are so close linked in the brain, that eradicating hate could also eradicate love.

One such organization that seeks to eliminate hate from society through suppressive, bullying tactics is the Southern Poverty Law Center (SPLC). CRC has closely covered SPLC’s recklessness in labeling right-of-center groups who do not conform to its views of social justice as ‘hate groups.’

“Conservative writers have observed that to be called a “racist” today is akin to the label “Communist” in the 1950s,” wrote CRC Senior Vice President Matthew Vadum. “Indeed, the SPLC’s tactics are hard to distinguish from those of the late Senator Joseph McCarthy, who was also a fan of guilt by association.”

While straining at gnats to find intersectional oppression in Western society, the SPLC attacked J.R.R. Tolkien’s The Lord of the Rings and J.K. Rowling’s Harry Potter. On SPLC’s website Tolerance.org, Colleen O’Brien wrote in 2004,

In J.K. Rowling’s world, half-blood means ‘half magic.’ But the term—reflecting a dichotomy between magic/powerful and mundane/helpless—implies a hierarchy. This ‘magic’ hierarchy directly resembles racial hierarchies.

On Lord of the Rings, Andrea Lewis wrote,

Almost all of the heroes of the series are manly men who are whiter than white. They are frequently framed in halos of blinding bright light and exude a heavenly aura of all that is Eurocentric and good. Who but these courageous Anglo-Saxon souls can save Middle Earth from the dark and evil forces of the world?

Lewis contrasted this with the movie The Matrix, in which “(Lambert Wilson) with his French accent; the dread-locked, very British albino twins (Neil and Adrian Rayment); and the Oracle’s evil counterpart, the Architect (Helmut Bakaitis), a rather stuffy and pompous white guy with white beard and white suit who reeks of imperialism.” [Parentheses in original.]

Vadum noted that Lewis believes that “art should be a slave to politics.” “To my African American female eyes,” Lewis wrote, “the biggest difference between ‘The Lord of the Rings’ and ‘The Matrix’ isn’t swords vs. automatic weapons, or low-tech vs. high-tech. It’s the patriarchy of the past versus the Rainbow Coalition of the future.”

But money, not theory, reigns supreme for the SPLC social justice warriors in their Montgomery, Alabama Poverty Palace.

The SPLC prides itself on using the law to fight hate groups. But CRC discovered that the organization’s 2015 salary expenditure outpaced its legal services 328 to 1. Its base salary for officers, directors, trustees, and key employees in 2015 was $140,000, in a state where the mean salary for religious and education directors, including private school principals, was $40,820 in 2015.

The SPLC takes advantage of people’s goodwill,” said Sommers – all to raise money.

“The SPLC even attacked my friend Ayaan Hirsi Ali as an extremist,” Sommers said, all because Ali sheds a light on violent Islamic extremism. (The Somali-born Ali is a noted critic of Islam, and a former member of the Dutch parliament living in the U.S.) In an op-ed in the New York Times entitled “Why is the Southern Poverty Law Center Targeting Liberals,” Ali stated, “You will look in vain for the S.P.L.C.’s “Field Guide to Muslim Extremists.” No such list exists.”

CRC’s Chase Paulson has noted that the SPLC refuses to label Antifa, a movement that has had ties with Muslim extremists and communists, a hate group. SPLC president Richard Cohen instead called them “wrongheaded,” telling the Washington Examiner that “[t]here might be forms of hate out there that you may consider hateful, but it’s not the type of hate we follow.”

A glance at the SPLC’s website reveals why: the only type of hate that concerns the SPLC is the type that fits the theory of intersectionality.