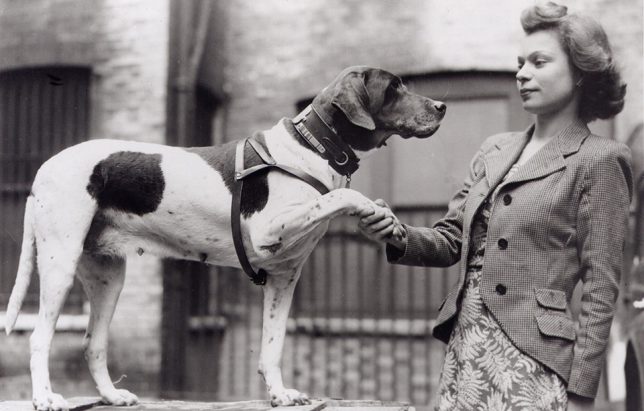 This article originally appeared in Philanthropy Daily on August 2, 2018.

A remarkable fact of nature is that animals sometimes save our lives—and when they do they deserve credit for their achievements. Graham Hillard, an English professor at Trevecca Nazarene University, does this in his profile of the Dickin Medal in the Weekly Standard.

The Dickin Medal was the idea of Maria Dickin (1870-1951). Dickin was an energetic Edwardian social reformer. In 1917 she saw many wounded animals abandoned in poverty-stricken London. Hillard quotes Dickin, in her 1950 memoir The Cry of the Animal, saying how she saw “many dogs and cats walking on three legs, dragging along a broken or injured limb; others nearly blind with mange; covered with sores; nearly all looking dejected and miserable and searching for food in the gutter.”

Dickin resolved to help these abandoned animals, and in 1917 founded the People’s Dispensary for Sick Animals, which celebrated its centennial last year. But her other great idea came about in 1943, when she noticed that animals were doing their part to win World War II. Shouldn’t they be recognized for their achievements?

So she created the Dickin Medal, which is given to animals who perform heroic deeds that help humans. It’s the highest award an animal can get, and is regarded as the animal equivalent of the Victoria Cross.

At first the medal was primarily awarded to pigeons. Beach Comber received a medal for conveying the first news of the abortive Canadian landing in Dieppe, France in 1942. Gustav performed a similar role with the D-Day invasion in 1944. Other pigeons provided life-saving notices of aircrews that had crashed in the desert or the sea. White Vision, the first recipient of a Dickin Medal, flew nine hours in bad weather to alert the military about a downed aircrew.

In 1949, the medal was given to a cat. Simon was smuggled aboard HMS Amethyst in 1948, a ship sent to China to help evacuate British troops in the ongoing civil war between Nationalists and Communists. Zachary Crockett tells Simon’s tale in this post from Priceonomics. The Amethyst was trapped in the Yangtze River for several months, too damaged to move and trapped in the ongoing conflict. The ship’s fans stopped working and rats roamed the ship. Simon was badly hurt by shrapnel but he did his duty and killed as many rats as he could, including one large one the crew nicknamed “Mao Tse-Tung.” Eventually the Amethyst made it to safety and Simon became a national hero.

As Sam Knight notes in this article from Military History Monthly, the Dickin Medal wasn’t awarded between 1949 and 2000. Since its revival, the medal has been given to 14 dogs and two horses: Warrior, chosen in 2014 to represent all the horses who served in World War I, and Reckless, a horse who served with the First Marine Division during the Korean War, carrying 4 to 8 24-pound recoilless rifle shells at a time and assisting in laying telephone wire. During the battle of Outpost Vegas in 1953, Reckless made 51 trips to the front under heavy fire. Her courage earned her a Purple Heart and two promotions; she retired as a staff sergeant in 1959. Staff Sgt. Reckless had four children and lived until 1968.

Hillard notes that it’s surprising that animal rights activists haven’t made the Dickin Medal “a source of controversy in these squeamish times, implicitly positing, as it does, that animal suffering in the cause of human progress is not only to be borne but celebrated.”

As I understand it, the Marines treat the animals they work with, not as animals, but as fellow Marines. That’s the case with Lucca, who served with the Marines on two tours of duty in Iraq and one in Afghanistan helping to sniff out explosive devices. Lucca worked on over 400 missions until one of her legs was blown off by an IED in 2012.

Is Lucca a hero? Yes. Should we hold her in high esteem? Yes.

The Dickin Medal shows the courageous behavior of many animals. Maria Dickin’s creation of the medal shows philanthropy at its best.