In letters to Virginia voters, Vote Forward tries to appear nonpartisan. It isn't. 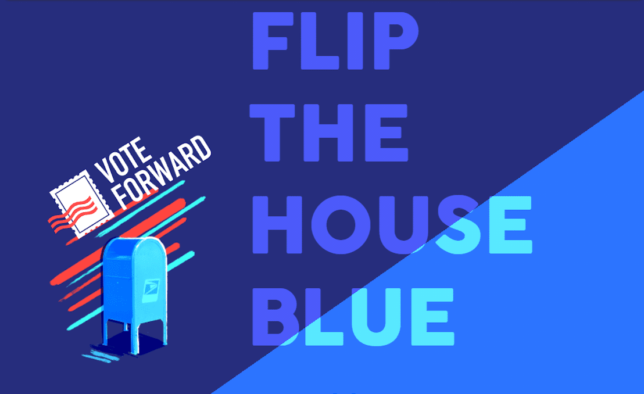 Virginia’s election is less than a month away, and many view it as foreshadowing the 2022 midterm elections. On November 2, Virginians will choose their next governor and which party controls the state house. Gubernatorial candidates Glenn Youngkin (R) and Terry McAuliffe (D) are in a virtual tie in the polls. Early voting is already underway.

Numerous Virginians have likely received partially handwritten letters in their mailboxes from a Vote Forward representative, urging them to register for absentee ballots by October 22—such as my own (redacted) copy: 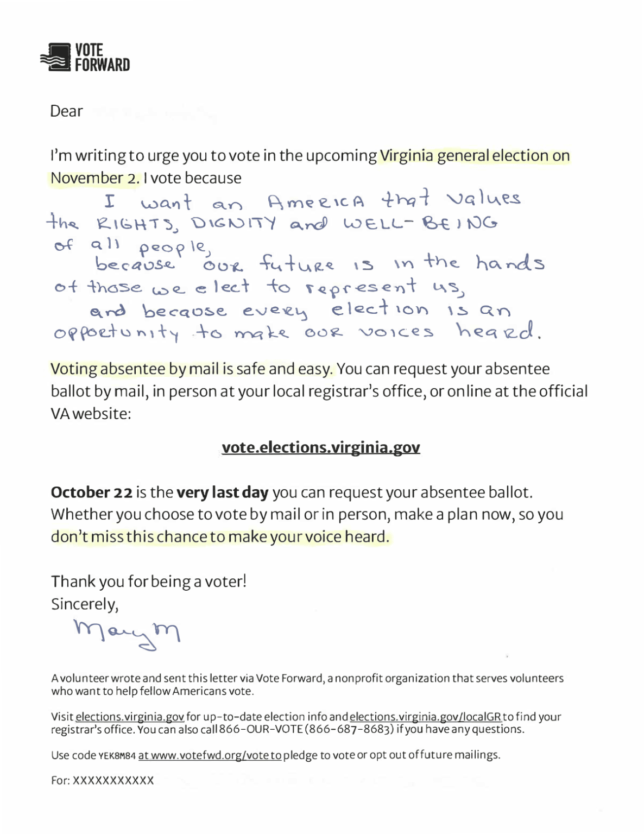 The mailers are harmless enough, but what about Vote Forward, which claims to be a “nonprofit organization that serves volunteers who want to help fellow Americans vote”?

Make no mistake: It is a product of the professional left meant to fool you into believing it isn’t.

Vote Forward was formed in 2017 to send “please vote” letters to turn out unlikely voters in swing districts. While the group is officially nonpartisan per IRS requirements, its partner Swing Left certainly isn’t.

In 2018, Swing Left provided Vote Forward with data on churning out votes in 78 key districts that Democrats needed to win to seize control of the U.S. House of Representatives. The two groups even share the same Pennsylvania Avenue office space.

An archived version of the Vote Forward’s website from October 2018 reads “Flip the House Blue: Send letters to unlikely voters.” Elsewhere, the group admits that many of its campaigns “typically target low-propensity voters who we believe are likely to vote for Democrats when they do cast a ballot.”

Vote Forward is also reported as a client of a Democratic political consultancy in public disclosure forms filed by Emma Ruiz, a Texas Democrat who now serves as deputy assistant to President Joseph Biden.

Most telling is that Perkins Coie lawyer Ezra Reese is listed among the group’s officers. Reese has been a partner at the left’s favorite law firm since 2013. Last month he joined the Elias Law Group, a Perkins Coie spin-off “focused on electing Democrats, supporting voting rights, and helping progressives make change.”

Marc Elias, the group’s chairman, is a top lawyer for Democratic politicians. He was general counsel for Hillary Clinton’s 2016 presidential campaign and is responsible for pioneering the super PAC model, a kind of political vehicle that can spend unlimited sums and a target of far-left ire.

Despite this paper trail, Vote Forward doesn’t appear in the IRS nonprofit database. Yet it’s listed as a 501(c)(4) advocacy nonprofit—indicating that it was set up to conduct more extensive lobbying and political activities than a 501(c)(3) public charity—in a Form 990 filing for another leftist giant, the Hopewell Fund, which paid a $604,275 grant to Vote Forward in 2019.

The Hopewell Fund is just one arm of a $731 million “dark money” network run by Arabella Advisors, a left-wing consultancy in Washington, D.C. My colleagues and I have studied this system for years—you can be sure to find the left’s top professional activists anywhere Arabella is involved.

This is the only known grant to Vote Forward. If it is a legitimate nonprofit, why isn’t Vote Forward registered in the IRS database?

Vote Forward appears again, leading a September 2020 lawsuit against the U.S. Postal Service accusing Postmaster General Louis DeJoy—a Trump administration nominee—of “undermin[ing] USPS’s ability to ensure the on-time delivery of mail ballots” ahead of the 2020 election. According to the lawsuit, Vote Forward was founded to send “get-out-the-vote” mailers to “traditionally underrepresented communities,” with a goal of reaching 10 million voters by October 2020. 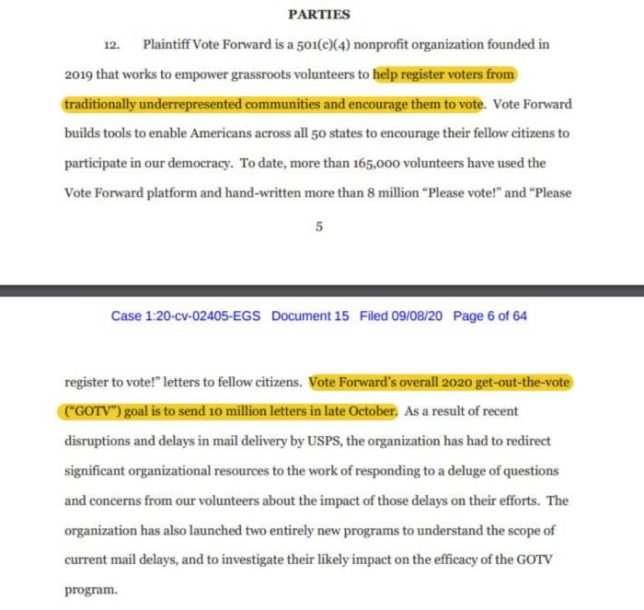 It eventually came to an agreement with USPS on delivering mail-in ballots in time for the Georgia Senate special election in January, though the details are unclear.

As I’ve written elsewhere, this is the latest campaign by left-wing activists who believe that future Democratic Party victories depend on centralizing control of elections in the federal government. Permanently installing elections by mail in every state is critical to that scheme.

No wonder the likes of Daily Kos, the League of Conservation Voters, and the absurdly named Save Our Democracy are lining up to praise Vote Forward. Just one week before the 2020 election the New York Times hailed its goal of boosting Democratic votes.

Apparently, these activists’ believe avoiding the appearance of partisan gain is key to their success. Expect the coming election to prove them right or wrong.

This article originally appeared in the American Conservative on October 13, 2021.