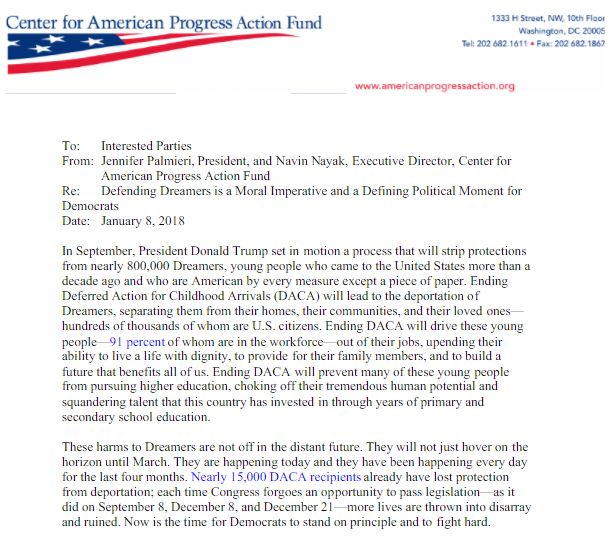 "The fight to protect Dreamers...is also a critical component of the Democratic Party's future electoral success." Accessed via Scribd.com at https://www.scribd.com/document/368752696/Memo-On-Dreamers
by Matthew Vadum

A secret strategy memo from the Left’s most influential think tank warns that Democrats face electoral oblivion unless they immediately double-down on their support for the young illegal immigrants known as the DREAMers.

Democrats have to stand with the so-called DREAMers “and do whatever it takes to ensure they remain in this country—often the only one they’ve ever known,” the document states, according to the Daily Caller.

The unearthing of the memo from former Hillary Clinton campaign operatives at the Center for American Progress (CAP) may help to explain the impassioned, false sense of urgency of left-wing nonprofit groups to have the plight of the approximately 700,000 beneficiaries of former President Obama’s constitutionally dubious Deferred Action for Childhood Arrivals (DACA) program decided soon and with finality.

Those who want DACA-eligible individuals to be granted amnesty have falsely portrayed the end-of-the-week deadline for Congress to adopt stopgap fiscal legislation to prevent the federal government from running out of money as a deadline on DACA. Despite the high-pressure salesmanship coming from the Left and its allies in the media, there is no imminent legislative emergency because President Trump gave Congress until this March to resolve the issue.

The memo originates from the Center for American Progress Action Fund, the 501(c)(4) lobbying arm of 501(c)(3) CAP. It was co-authored by CAP Action Fund President Jennifer Palmieri and Executive Director Navin Nayak. Palmieri was communications director for Clinton’s 2016 campaign, while Nayak was its opinion research director. CAP is funded by George Soros and other members of the left-wing philanthropic elite. CAP Action is heavily funded by the Annie E. Casey Foundation of Baltimore which has given it $656,000 in grants since 2008.

DREAMers are a “critical component of the Democratic Party’s future electoral success,” according to the memo dated Jan. 8.

Shielding DACA beneficiaries from enforced removal is so important to the left-wing agenda that Democrats have to “refuse to offer any votes for Republican spending bills that do not offer a fix for Dreamers and instead appropriate funds to deport them.”

“The fight to protect Dreamers is not only a moral imperative, it is also a critical component of the Democratic Party’s future electoral success,” states Palmieri’s memo.

“If Democrats don’t try to do everything in their power to defend Dreamers, that will jeopardize Democrats’ electoral chances in 2018 and beyond,” the memo states. “In short, the next few weeks will tell us a lot about the Democratic Party and its long-term electoral prospects.”

DREAMers, by the way, are the stuff of leftist myth. The misleading, aspirational expression comes from the DREAM (Development, Relief, and Education for Alien Minors) Act, a legislative proposal to grant underage and formerly underage illegals immigration amnesty.

Although the media has romanticized DREAMers, portraying them as heroic figures worthy of admiration, many DREAMers seem ill-equipped for life in the United States. In fact, they tend to be underachievers, less educated and less established than typical Americans.

According to the nonpartisan Center for Immigration Studies, about 24 percent of DREAMers are functionally illiterate and 46 percent possess only “basic” English ability. Only 49 percent have a high school diploma, even though a majority are now adults.

The Left has been misrepresenting the DREAMers for years, building them up to be something they’re not. They’ve been using these unfortunate people as pawns in a larger political war to fundamentally transform America.

Thanks to Jennifer Palmieri’s leaked memo, now we know just how important DACA recipients are to the Left’s plans for the country.