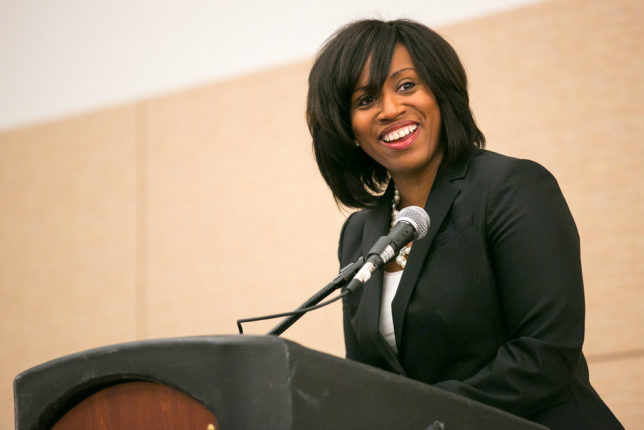 Democratic Reps. Ayanna Pressley (MA) and Alexandria Ocasio-Cortez (NY) are soliciting contributions to the bail fund for individuals who were arrested while protesting Boston’s Straight Pride Parade. Four police officers were injured as a result of actions by the counter-demonstrators, which included Antifa supporters.

Boston police told the Boston Herald there were 36 arrests related to the event, with charges ranging from disorderly conduct, resisting arrest, carrying a dangerous weapon, and assault and battery on a police officer. The vice president of the Boston Patrolmen’s Association, Larry Calderone, told CBS Boston that police officers were “assaulted throughout the day, with bottles of urine being thrown at them, bottles of chemicals.”

One of the protesters who identified himself as an Antifa member, Jon Crowley, told the Boston Herald, “We’re covered in black so when we attack these guys we can’t be prosecuted,” a tactic known as black bloc.

“They are fascists, 100%. How else are you going to get them to shut up?” he continued.

Despite the violent escalation by Antifa and possibly other left-wing groups protesting against the Straight Pride Parade, Pressley said the people who came out to counterprotest “laid their bodies on the line today in affront #LGBT hate march” while asking for people to join her in donating to a bail fund for those arrested:

Join me right now in making a contribution. TY to the allies & accomplices who stood in the gap & laid their bodies on the line today in affront #LGBT hate march. To everyone feeling unseen & vulnerable today…we got you. Equitable outrage. Our destinies & freedoms are tied. https://t.co/xwHQDX7UG2

The marshal for the march was Milo Yiannopoulos, who happens to be gay.

Contribute to the Bail Fund for the activists who put themselves on the line protecting the Boston community:https://t.co/z2NRSqHMve

Previously, Ocasio-Cortez mocked the Straight Pride Parade attendees by claiming they have a problem with masculinity:

For men who are allegedly so “proud” of being straight, they seem to show real incompetence at attracting women to their event.

Seems more like a “I-Struggle-With-Masculinity” parade to me. 🤷🏽‍♀️

Hope they grow enough over the next year to support / join LGBTQ fam next #Pride! 🏳️‍🌈 https://t.co/DUb52ktWOP

The bail fundraiser was set up by the Lucy Parsons Center, a 501(c)(3) organization and a volunteer bookshop. It raised over $24,000. According to the “Solidarity Against Hate Legal Defense Fund,” the money raised will go to the Massachusetts Bail Fund and Boston GLASS, a LGBTQ+ “youth of color” services organization.

In fact, Ocasio-Cortez has, for years, advocated for eliminating cash bail entirely. In 2018, Ocasio-Cortez attended an event hosted by the Bronx Democratic Socialists of America (DSA) and the New York City DSA to call for ending cash bail. According to Ocasio-Cortez in 2017, because of cash bail, “Ppl spend years in jail w/o a guilty verdict bc they can’t afford bail. It’s wrong.”

The Boston Police Patrolmen’s Association condemned Pressley’s campaign to contribute to the bail fund in a statement written by its president, Michael Leary:

My members have informed me that the individuals who were arrested on Saturday were not peaceful protesters but were committing crimes of assault against Boston Police Officers. In fact at least four officers were injured by actions of some of the protesters. These officers were screamed at, abused and fought by these so-called peaceful protesters. Your actions in support of these individuals serves only to encourage criminal and disruptive behaviors such as those suffered by my members this weekend. This attitude also further contributes to the growing we/they attitude against police officers in this Country.

Pressley has also called for an “independent investigation” into how the Boston Police behaved at the Straight Pride Parade. She claimed that footage she has reviewed has left her with “more questions” about what occurred. Pressley also criticized the judges’ decisions for not dismissing the charges as “overreach.” According to CBS Boston, Suffolk County District Attorney Rachael Rollins filed an emergency petition with the Massachusetts Supreme Judicial Court to compel Boston Municipal Court Judge Richard Sinnott drop charges for disorderly conduct in relation to the event.

The Boston Herald reports Rollins won the battle to throw out the charges of disorderly conduct.