“Creation Care” Is a Secular Agenda Disguised as Christianity 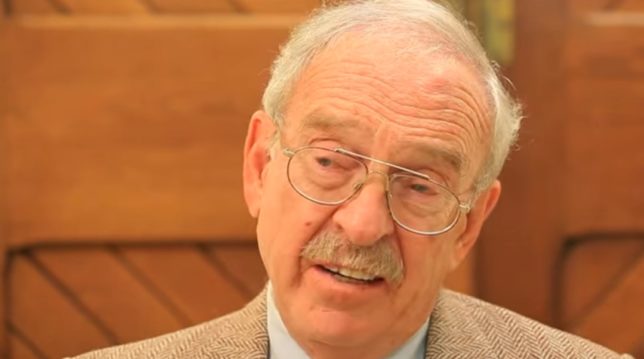 Ron Sider, founding board member of the National Religious Partnership for the Environment. Credit: InterVarsity Press/YouTube.
by Hayden Ludwig

If you have never heard of “creation care,” you will. It’s coming to a church near you.

Creation care is an attempt to disguise environmentalism and its secular, global warming agenda as a mandate from the Bible. These activists’ goal is to redefine “pro-life” to incorporate doctrinaire environmentalism, framing its misanthropic history of eugenics, population control, forced sterilization, and even abortion as a “gospel issue.”

Christians shouldn’t be dazzled by these activists’ claims to biblical authority. Whatever its spiritual pretensions, creation care is much more than a theological interpretation of climate issues. It’s an entire policy agenda with something to say—and lobby for—on virtually every issue from the way Americans power their homes to what they are allowed to drive.

The Gospel According to Environmentalists

Creation care advocates often lecture about Evangelical Christians’ need to preach the “whole gospel” and be “completely pro-life,” drawing attention to environmental stewardship and public health issues that pro-life Christians have supposedly ignored. In reality, these are euphemisms for supporting socialized medicine and opposing capital punishment, nuclear weapons, and the reelection of President Donald Trump.

Groups such as Sojourners, the National Religious Partnership for the Environment (NRPE), and the Evangelical Environmental Network are lobby shops for policies such as President Barack Obama’s devastating Clean Power Plan, Environmental Protection Agency (EPA) regulations on coal-burning power plants, and a forced nationwide transition to 100 percent “clean energy” by 2050.

Ron Sider, a leading exponent of creation care and founding board member of NRPE, has even used the pages of the liberal Huffington Post to demand tax hikes on the wealthy and capital gains to combat the “sin” of income inequality.

These policy prescriptions are often disguised as prayers such as:

I ask You, Sacred Spirit, to inspire people of faith like me to hold the United States government—especially the EPA—responsible for allowing businesses and corporations to pollute our waterways.

So it’s no surprise that the same set of ultra-wealthy foundations that fund the radical eco-activists backing the Green New Deal are also behind creation care: George Soros’s Open Society Foundations, the William and Flora Hewlett Foundation, the Ford Foundation, and the Energy Foundation, to name a few.

This is a well-heeled, well-coordinated effort to pull the wool over Christians’ eyes.

Creation care was launched in 1993 with an Evangelical Declaration of the Care of Creation, a manifesto decrying water and air pollution as “perverted stewardship,” the “earthly result of human sin,” and calls “on all Christians to work for godly, just, and sustainable economies,” blaming the degradation of creation on poverty.

Historical Christianity has always taught that Creation and humanity were created by a good God but are thoroughly tainted by sin. Christians are natural conservationists, given their deep reverence for Creation rooted in the biblical teaching that Man has dominion over the Earth—not only for the protection of nature but the engagement and use of its resources.

Creation care, however, is a product of environmentalist ideology, not Genesis. This ideology inverts the biblical understanding of Man’s relationship with nature by teaching that humanity is a blight upon the Earth. Environmentalism has its roots in Marxist thought, the idea that all history can be understood as conflict between groups of people: workers vs. capitalists, blacks vs. whites , men vs. women, and carbon dioxide “polluters” vs. “victims.”

The inevitable outcome of these beliefs is population control on a global scale. That’s not a fluke—it’s environmentalism returning to its roots, and creation care with it.

Many leading population control groups in the 20th century—such as Population Connection (founded as Zero Population Growth by doomsayer Paul Ehrlich) and the Population Council (founded by eugenicist John D. Rockefeller III)—now support global warming policies as a solution to the same “overpopulation” problems they were created to “solve.”

Let’s not forget that Planned Parenthood founder Margaret Sanger—who lobbied multiple U.S. presidents on the novel idea of forming a Federal Birth Control Commission and Population Bureau to diagnose the “racial health of this nation”—considered it shocking that “anyone, no matter how ignorant, how diseased mentally or physically, how lacking in all knowledge of children, seemed to consider he or she had the right to become a parent.”

One wonders if she got that idea from the many white supremacists and eugenicists on her organization’s board, such as Theodore Lathrop Stoddard, who authored the 1920 book The Rising Tide of Color Against White Supremacy and coined the term “Under-Man,” which was the genesis of the Nazi term Untermensch (“sub-human”) for non-Aryans.

A Return to Christian Socialism?

One key Christian socialist, the minister George Herron, even creatively retooled the biblical account of the first murder in history—Cain, who killed his brother Abel—as the spirit of greedy capitalism now vanquished by a working-class Christ. Herron later co-founded the Socialist Party (which opposed ownership of private property) and campaigned for its perennial standard-bearer, Indiana state Rep. Eugene Debs, perhaps the most radical person to ever run for the presidency.

Sanger had her own contacts among Christian socialists. In 1934, she was guided through the Soviet Union by Sherwood Eddy, an American expatriate, universalist missionary, and eager convert to Communism.

This is the legacy of environmentalism that creation care advocates don’t reveal to Christians. And there’s a reason why—few would buy it without the gauzy, pseudo-biblical packaging.

The gospel of free grace delivered by a Christ who came to save sinners doesn’t come with a political platform. Christians (and everyone else), beware the false teachers in your midst.