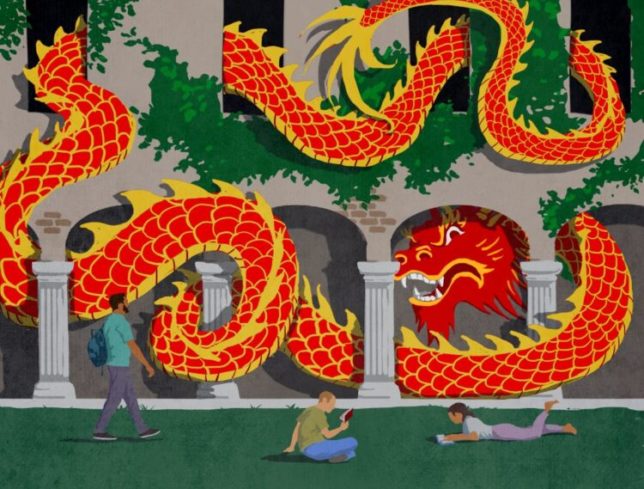 The great challenge that free societies face is how to deal with those who seek to exploit that freedom for malevolent purposes. America’s civic institutions—its universities, think tanks, charities, and other associations—are the organizational bedrock upon which that freedom rests. Because of this, they’re vulnerable to foreign state actors who try to take advantage of our tradition of openness.

On October 13, the State Department issued a press release requesting that “think tanks and other foreign policy organizations” publicly disclose any funding that they receive from foreign governments and state-owned enterprises. While the department isn’t explicitly requiring donor disclosure, it noted that it “will . . . be mindful of whether disclosure has been made and of specific funding sources” when deciding whether and how to work with a given organization.

On one hand, advocates for an independent civil society and donor privacy might cry foul: Most of the impacted groups are likely 501(c)(3) nonprofits, which must disclose their donors to the IRS, but need not do so publicly. They might see the request as a government attempt to coerce a private organization into doing something that it is not required to.

On the other hand, the request applies to those groups that “wish to engage with the Department”—in other words: influence the U.S. government. And the government’s concerns are well-founded. Indeed, they’re one component of recent and mounting trepidation over the influence that foreign state actors (China in particular) are seeking to build in American civic institutions.

Some recent high-profile cases have drawn attention to the issue. In January 2020, the chair of the Chemistry Department at Harvard University was criminally charged with lying about his paid work on behalf of China. That same press release disclosed the arrest of a Chinese cancer researcher in Boston who allegedly was caught trying to smuggle vials of stolen biological material back to China. In July, a visiting researcher at Stanford University was charged with concealing her status as an active member of the Chinese military.

These examples are part of a body of strong evidence that foreign governments—especially China—actively exploit the openness of American society in order to steal “taxpayer-funded research and intellectual property.” A 2019 Senate report details how the Chinese Communist Party recruits and incentivizes U.S.-based researchers to help further “its own economic and military gain.” The report found that insufficient oversight by federal grantmaking agencies has exacerbated this problem. According to Secretary of Defense Mark Esper, China is currently perpetrating “the greatest intellectual property theft in human history.”

Compounding things further are the results of recent investigations by the Department of Education that revealed a disturbingly high rate of noncompliance with federal laws that require universities to disclose their foreign funding. Under Section 117 of the Higher Education Act, Title IV–eligible schools must report foreign gifts and contracts in excess of $250,000. The department’s investigations have so far identified “approximately $6.5 billion in previously undisclosed foreign money,” with just 10 schools accounting for more than half. Yale University, for example, failed to report a single foreign gift or contract from 2014 through 2017.

The reports that have come in raise questions about the ultimate sources of this funding. As noted in a series of August 2020 letters from the Republican ranking members of three House committees, six universities—University of Chicago, University of Delaware, Harvard University, New York University, University of Pennsylvania, and Yale University—reported a combined $242 million in anonymous grants or contracts from China, Qatar, Saudi Arabia, Iran, and Russia since 2015. A separate August letter to Stanford University from the Department of Education noted that Stanford had reported over $64 million in anonymous funding from China since May 2010.

Parallel to these investigations, a bipartisan group of senators has moved to address things legislatively through the Safeguarding American Innovation Act. A good summary of the bill is available from Ropes & Gray here. Some major provisions include:

Although the bill passed unanimously in committee, it has met with opposition from associations that represent higher education. Two letters from July 20 and July 21 outline a series of objections from nonprofits including the American Council on Education, the Association of American Universities, and the Association of Public and Land-Grant Universities. Among the concerns raised are the impacts of expanded visa denial authority and reduced Section 117 reporting standard, which one letter calls an “excessively low threshold.”

Indeed, though these associations emphasize their desire to work with government on the issue, the relationship appears tense. After the letters were published, Senator Rob Portman (R-OH)—one of the co-sponsors of the bill—remarked that “sometimes [research universities] want to look the other way” on foreign government influence over their faculty. When House Republicans wrote the six universities asking for details about the $242 million in reported anonymous foreign funding, a vice president of the American Council on Education derisively politicized the request as an “unwarranted partisan fishing expedition aimed solely at schools in blue states in an election year.”

FBI Director Christopher Wray recently stated that “the greatest long-term threat to our nation’s information and intellectual property, and to our economic vitality, is the counterintelligence and economic espionage threat from China.” While it’s important to remain vigilant against Nietzsche’s warning about fighting monsters, the dangers posed by an ascendant China are very real and require effective responses.

Americans should always bear healthy skepticism toward government efforts to influence private civic institutions. But those same institutions can become genuine national security vulnerabilities, especially when they work with the government as a grantee, contractor, or simply as an advisor. The current approach—enhanced reporting, oversight, and disclosure—attempts to balance the often competing interests of freedom and security. Sunlight, as they say, is the best disinfectant.