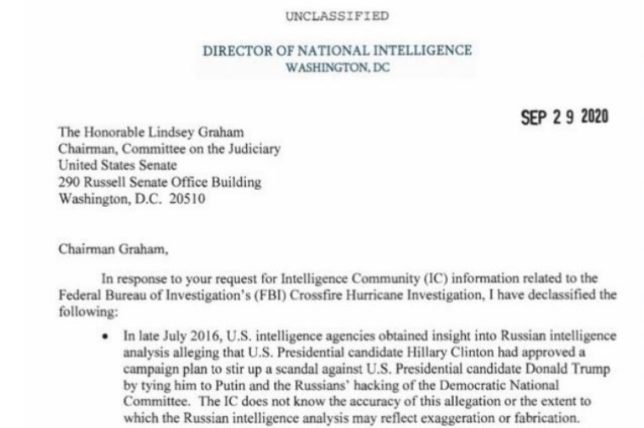 First page of letter from DNI John Ratcliffe to Sen. Lindsey Graham stating that he has declassified a briefing from 2016 between former CIA Director John Brennan and President Barack Obama. Credit: Director of National Intelligence.
by Ken Braun

One year ago this week, in the early rounds of the 2020 Democratic presidential primaries, Hillary Clinton launched herself back into the center of the Russiagate hoax. Speaking to a friendly interviewer in October 2019, she accused 2016 Green Party presidential nominee Jill Stein and U.S. Rep. Tulsi Gabbard (D-HI) of being pawns of the Russian government.

Last week—as if her very name were some form of seasonal storm spewing October conspiracy theories—Clinton bounced back to the top of hoax news. This time it happened when Director of National Intelligence John Ratcliffe declassified a briefing from 2016 between former CIA Director John Brennan and President Barack Obama. Brennan’s handwritten notes revealed he had received an allegation that Clinton had personally approved “a proposal from one of her foreign policy advisers to vilify Donald Trump by stirring up a scandal claiming interference by the Russian security service.” Clinton’s alleged motive was “a means of distracting the public from her use of a private email server.”

A U.S. intelligence source with ties to Russian intelligence provided this information, which should cause honest skeptics to wait until more evidence either disproves or proves the allegation of Clinton’s alleged misbehavior. Critics (i.e., Clinton and Democratic allies) have pre-emptively denied the possibility of their 2016 presidential candidate being a central driving force of the now-disproven hoax that the 2016 Trump campaign was colluding with the Russian government.

Clinton supporters should be more skeptical and carefully read the InfluenceWatch profile of the history of the Trump Russia Collusion Claims.

Here is just one other example of Clinton’s allegiance to the hoax during yet another October:

During the 2016 campaign, Clinton and her campaign promoted allegations from the now-discredited Steele dossier. One discredited rumor in the dossier asserted a secret line of communication between the Trump Organization and Russia’s Alfa Bank. Though the rumor was repeated in the mainstream media during October 2016, the Department of Justice Inspector General report found that the “FBI investigated whether there were cyber links between the Trump Organization and Alfa Bank, but had concluded by early February 2017 that there were no such links.” Left-leaning journalist Glenn Greenwald awarded the Alfa Bank rumor with fifth place on his list of “The 10 Worst, Most Embarrassing U.S. Media Failures on the Trump-Russia Story.”

The InfluenceWatch profile contains more examples of Clinton’s support for cooked-up conspiracy theories and the whole sordid history of Russiagate.