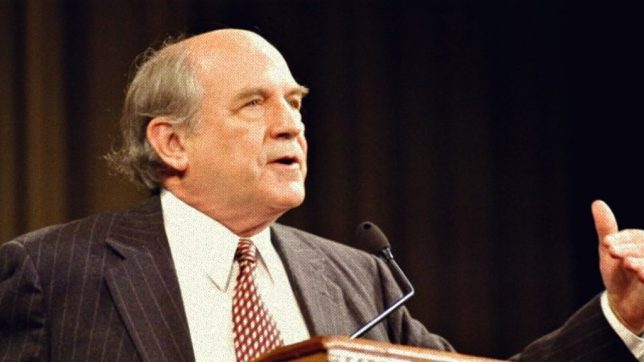 On January 8, 2018, Charles Murray turned 75. On his birthday, which he shares with Elvis Presley and Lewis Lapham, Murray announced his retirement from the American Enterprise Institute[1] with a farewell address, which you can see here. I went, and the auditorium at AEI was filled with people who respected his achievements. (The radical nitwits who disrupt speeches stayed home.)

Murray noted two people who gave his career a substantial boost. One was the program officer at the Bradley Foundation who gave the Manhattan Institute[2]$30,000 in 1982 to enable Murray to write Losing Ground. (John J. Miller discusses this grant in his 2003 Philanthropy Roundtable study How Two Foundations Reshaped America.)

The second hero, in Murray’s view, was long-time AEI president Christopher DeMuth. When The Bell Curve was published in 1994, Murray was subject to an incredible amount of abuse. DeMuth stood by Murray and he kept his job.

I think the occasion of Murray’s retirement is a good time to review his career with brief reviews of his books. His career was made possible by philanthropy; a steady stream of grants, first to the Manhattan Institute and then, from 1989-2017, to the American Enterprise Institute, made his career possible. I believe that, of all these books, only Apollo: The Race to the Moon was written on commission from a publisher’s advance. Philanthropy made Charles Murray’s career possible by giving him the time to write long, thoughtful books.

Donors always wonder if their grants will result in lasting change.  The donors who made Charles Murray’s career possible received substantial intellectual returns on their investments.

I’m limiting my discussion here to books from commercial publishers. I haven’t read Murray’s most recent book, By the People, but Jacqueline Pfeffer Merrill reviewed it here at Philanthropy Daily. I also haven’t read What It Means To Be a Libertarian, because I understand it is a revised edition of In Pursuit, and I read In Pursuit. [3] Finally, I haven’t read the two books Murray wrote before Losing Ground. But here are summaries of Murray’s other books.

Losing Ground (1984) the book that put Murray on the public policy map, and still one of the most important books in understanding the problems of the welfare state in our time. You can—and I am sure someone has—traced the history of the 1996 welfare reform from the publication of this book.

In Pursuit (1988): From his farewell address, I gather this is a book that matters quite a lot to Murray. At its core, the book tries to answer this question: what is the best way to live? Work hard at work you enjoy is the short answer, but of course there is much more about what happiness means, in this very Aristotelian book.

Apollo: The Race to the Moon (with Catherine Bly Cox, 1989): After Losing Ground, Murray was looking for work, so he got contracts to write In Pursuit and this book (co-written with his wife), a look at the Apollo missions from the viewpoint of the engineers who ensured that Apollo was a success. A very nuts-and-bolts story of competent engineers who solved problems and kept missions going. Had this book been a success, Murray’s career might have gone in a different direction. This is a very good book that does not deserve its obscurity.

The Bell Curve (with R.J. Herrnstein, 1994): Murray’s most controversial book, although he is the junior author here and I don’t know how much of the book was written by Murray and how much by Herrnstein. Murray deals with IQ and race, two highly combustible topics. Read the book closely and you will discover that at its heart is Murray’s desire to help the lowest level of Americans climb the social ladder.

Human Accomplishment (2004): Who are the greatest artists, scientists, and philosophers in history? Murray answers this question by counting the space given to biographies of these thinkers in standard reference works. A provocative look at history, marred by Murray’s deeply rooted pessimism; he thinks it not possible to equal or surpass the great art of the Renaissance.

Real Education (2008): I reviewed this book here at Philanthropy Daily. In his shortest public policy book, Murray says there are four truths everyone in education needs to know, including that half of all students are below average and that the best students need better preparation for how to succeed in the labor force. He also calls on philanthropists to create a multi-year project to see what methods can help the lowest-performing students succeed in school. This is a little dated, but a book anyone interested in education reform should read.

Coming Apart (2012) I reviewed this book for the Martin Center here. Murray’s late masterwork, dealing with how the wealthiest one percent is seceding from the rest of America and what can be done about it. As controversial as Losing Groundor The Bell Curve are, I don’t think anyone has ever seriously questioned Murray’s findings. Murray asks questions here about our country that every politician needs to answer.

The Curmudgeon’s Guide to Getting Ahead (2014): A little book of practical advice, written because Murray kept getting pestered by interns and research assistants who kept asking questions about how to get ahead. I’m a Baby Boomer, and I found several tips in this book valuable. This is probably Murray’s most casual book.

As you can see, Murray has had a productive career. If there are books on this list you haven’t read, you really should read them.

[1] The American Enterprise Institute has been a client of mine since 1990. Most recently, in 2016 and 2017, I provided educational research to AEI under contract. I do not currently have any contracts with AEI.

[2] I have done editorial work for the Manhattan Institute, which published my study By Their Bootstraps.

[3] I reviewed the manuscript of In Pursuit for the Wilson Quarterly, seeing if there was anything to excerpt in the magazine. While I was reading in a bar, a political scientist from the University of Oklahoma came by and asked me if I was reviewing the manuscript. I said I was. “Make sure you have no more than two beers,” he said. “Any more and you’ll either really love the book or really hate it.”