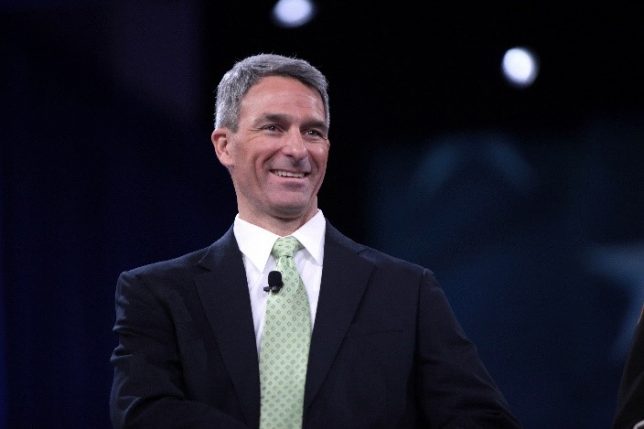 Ken Cuccinelli saw his fundraising sapped by a number of Scam PACs, which claimed to be providing major support to his election in their solicitations, but in fact, provided negligible backing.
by Michael Watson

Summary: The message is loud, aggressive, and simple: Defend the President! Others call for “Impeachment now!” or claim to “draft” a challenger to face down a hated rival, even one within the same party. But while solicitations for political contributions often bear the names of prominent politicians, political parties, or issue campaigns, they sometimes mask that they are, in fact, a sophisticated scam—raising money from small-dollar donors not to use for political advocacy or to support campaigns, but to instead funnel money back into consulting firms tied to the PAC’s officers. Now, the government—with support from political candidates who feel these groups have deceived their supporters—is cracking down on so-called “Scam PACs.”

In May, federal authorities charged two Arizona men, William and Robert Tierney, with various financial crimes related to their operation and management of nine political action committees (PACs). The government charged that, while the men raised millions promising to support the police, pro-life causes, and autism awareness by giving to candidates and engaging in public messaging, they, in fact, shuffled money into a series of shell companies which lined the organizers’ pockets.

The indictment of the Tierney brothers, which involved PACs called the “National Campaign PAC,” “Voter Education PAC,” “Grassroots Awareness PAC,” “Americans for Law Enforcement PAC,” “Protect Our Future PAC,” “Action Coalition PAC,” “Life and Liberty PAC,” “Republican Majority Campaign PAC,” and “Rightmarch.com PAC,” shined an aggressive spotlight on a new political phenomenon. The Tierneys’ committees are perhaps the most obvious incarnation of the “Scam PAC,” a political committee fueled by small-dollar donations and aggressive fundraising tactics, which contributes only a sliver of its funds to candidates or to independent expenditures supporting elections.

The targets of these Scam PACs are often elderly political donors giving contributions below the Federal Election Commission’s (FEC) $200 per-election-cycle reporting threshold. The government alleges the Tierney brothers solicited “almost entirely” these small-dollar contributions to power their Scam PACs. The effect of these Scam PACs, which targeted conservatives until very recently, was to siphon activist energy and support from worthwhile candidates and causes into what one conservative-leaning political lawyer called “a form of pyramid scheme that transferred tens of millions of dollars from rural, poorer Southerners and Midwesterners to bicoastal political operatives.”

Anatomy of a Rip-Off

In 2013, then-Virginia Attorney General Ken Cuccinelli (R) unsuccessfully sought the governorship, losing narrowly to Democrat Terry McAuliffe. His campaign had been hamstrung on all sides from party infighting and opposition from powerful business interests to property-rights ballot measures he supported in 2012. But rather than enjoying the full support of small-dollar-donor conservatives, who would have jumped to support the firebrand Cuccinelli against longtime Clinton-family bagman McAuliffe, Cuccinelli saw his fundraising sapped by a number of these Scam PACs, which claimed to be providing major support to his election in their solicitations, but in fact, provided negligible backing.

After the election, Cuccinelli sued the Conservative StrikeForce PAC, two political consultancies tied to the PAC, and four individuals involved in the rip-off. The lawsuit laid out just how the scam PAC had ridden on Cuccinelli’s campaign to shuffle funds from small-dollar donors trying to back the Republican’s campaign into the pockets of Beltway political consultants.

The PAC falsely claimed that it would pay for “phonebanks, get-out-the-vote-programs, mailings, [and] rallies” as part of “the largest GOTV [Get Out The Vote] plan in Virginia history.” Per Cuccinelli’s filing, the PAC conducted no such activities. And the money, solicited on the proposition that it would go to support Cuccinelli’s struggling get-out-the-vote efforts, allegedly went instead to line the pockets of political consultants Dennis Whitfield, Scott Mackenzie, Kelley Rogers, Chip O’Neill, and the companies they controlled: Strategic Campaign Group and Mackenzie and Company.

In the next installment of Caveat Donator, learn how increase polarization makes it easier for self-dealing scam-artists to prey on political discontent.