By Hook or By Crook: Preparing for the Next Generation 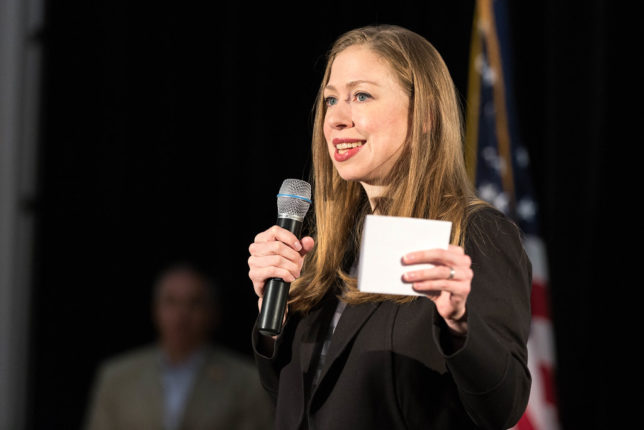 The event was co-sponsored by the Reuben Foundation, headed by David and Simon Reuben. A 2004 report in The Observer noted two connections between the Reubens and other Clinton Foundation donors—they had worked on projects with Sir Tom Hunter and, according to the World Bank, had founded their company, Trans-World, with a $2 million loan from Marc Rich.

During 2012, Bill Clinton also continued his site visits to Africa. Much of these trips had now become routine. New York Times reporter Amy Chozick, travelling with Bill and Chelsea Clinton in southern Africa in September 2012, noted that Bill Clinton had learned to use the Zulu word sawubona (“I see you”) as an introduction, so that Zulus could respond with ngikhona (“I am here”) in reply. He also loved to replay the conflicts of his presidential years over and over, and discussed his decision to send Black Hawk helicopters to Somalia in 1993 so often that his staff would tell people, “you got Black Hawked,” whenever he talked about Somalia.

Chelsea Clinton was also on the trip, as part of her increasing role in the Clinton Foundation. “The exposure,” Chozick reported, “is part of her deliberate evolution into a more public and less press-averse figure.”

“As she’s been exposed to the foundation and to what her father’s doing with his post-presidential life,” Hillary Clinton’s deputy chief of staff, Huma Abedin, told Vogue, “I think a light switched on: This is the legacy I’m going to inherit. To say that it is an incredible one is an understatement. She now knows that in 20, 30 years, everything about her father’s legacy is in her hands. It’s going to be Chelsea’s responsibility to carry that torch.”

Charlie Rose interviewed Chelsea Clinton at the 2012 Clinton Global Initiative meeting. “I’m not impervious to the fact that my dad turned 65, 66, gosh—he just turned 66—and my mom turns 65 next month. And my father has lived longer than any man on either side of his family in memory….With my work at CGI and the Clinton Foundation and working more in my father’s world and taking on more responsibility, I’m starting to work with him and hope that I will help them continue to work all the harder, all the longer.”

“What do you hope people come away with by coming to the Clinton Global Initiative?” Rose asked.

“I hope that people come away feeling empowered,” Chelsea Clinton said. “That candidly you don’t have to be Bill Clinton and have a platform like this, or Bill Gates and have, you know, almost infinite resources to muster towards a commitment, of defining a specific objective and metric to hold one’s self and one’s partners accountable towards reaching that objective that people will be truly invigorated to apply that thinking and that approach toward whatever it is that they really care about locally or globally.”

However, the future of the Clinton Foundation didn’t yet rest with Chelsea Clinton, but with Hillary. When she announced in the spring of 2012 that she would not serve in a second Obama administration, she invited speculation about what she would do next. “I’m looking forward to working as hard as I can until the end of my tenure as secretary of state,” she said at a press conference in Copenhagen in May 2012, “and then will look forward to some time to collect myself and spend it doing just ordinary things that I very much am looking forward to again, like taking a walk without a lot of company.”

“No politics?” a reporter asked.

“My mom is even more vehement in private than in public, if that’s possible, about leaving at the end of President Obama’s first term,” Chelsea Clinton told the New York Times in July 2012. “She wants to go back to being a professional advocate for women and girls.”

But Washington Post deputy political editor Anne Kornblut reported that the speculation about whether Hillary Clinton would run in 2016 was starting to rise. She noted it was likely that Hillary Clinton would write a book and be involved in the Clinton Foundation in some capacity. But “more than a half a dozen Clinton friends and advisers, past and present, who talked candidly about her prospects” were split about whether she would run.

Kornblut observed that other likely Democratic presidential candidates—Maryland Gov. Martin O’Malley, New York Gov. Andrew Cuomo, Vice President Joe Biden, Homeland Security Secretary Janet Napolitano, Sen. Kristen Gillibrand (D—New York)—had to start preparing immediately after the 2012 election, but “Clinton, because of her political network and experience, could decide as late as 2015, although that would surely frustrate donors and the other contenders.”

Anne E. Kornblut spent nearly 2,000 words speculating about Hillary Clinton’s future. She did not mention the problem of the Clinton Foundation and its donors.