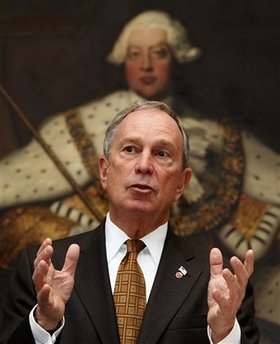 Arguing that New York needs his financial skill to guide it through the crisis on Wall Street, Mayor Michael Bloomberg persuaded City Council to amend the term-limits law Thursday so that the billionaire independent can run for re-election next year.

By a 29-22 vote, the council agreed to allow officeholders three consecutive four-year terms. Existing law limits them to two terms, and Bloomberg’s second is up at the end of 2009. […]

The vote dramatically alters the city’s political landscape. Many would-be mayoral candidates are expected to drop out of the race rather than run against a popular incumbent with unlimited cash to spend. Bloomberg founded the financial news service that bears his name and is worth an estimated $20 billion.

The term-limits proposal touched off a short but vigorous debate after Bloomberg announced his plans to seek re-election three weeks ago. The move was a sharp turnaround for Bloomberg, who had previously backed the term limits law and scoffed at any attempt to change it.

Scores of New Yorkers came to testify during 20 hours of council hearings, and a poll found that registered voters overwhelmingly disapproved of the plan.

On Thursday, Councilman Charles Barron, who voted against the bill, urged his colleagues to say “no to bullying, no to billions of dollars and yes to the people.” And Councilman Tony Avella said: “You should all be voted out of office for voting for this.”

Opponents argued that the mayor was going over the heads of voters, who approved term limits twice in the 1990s. Many critics said they did not disagree with Bloomberg’s goal of adding a third-term option but faulted the way he went about it.

“Everything has been wrong with this process, and we should not be party to it,” said Councilman Bill de Blasio. […]

We previously blasted Bloomberg’s drive to change the rules so he could buy another term of office. Everything’s a crisis to this hypocritical bully, who once called an effort to revise his city’s term limits law “disgusting.”

We repeat: Guys like Bloomberg are why term limits were invented.