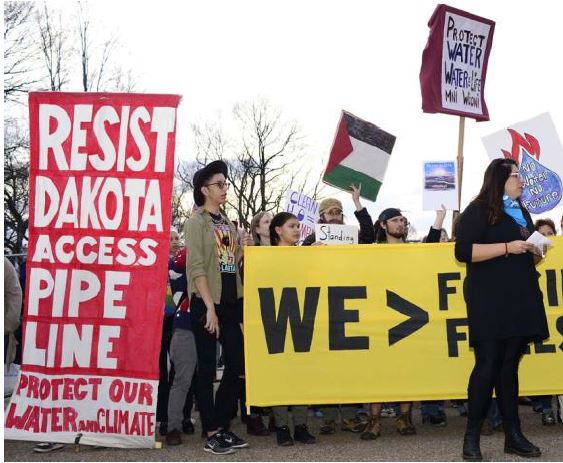 In 2011 I was in a coffee shop across the street from the main Occupy encampment in Washington. I was trying to read a book I was reviewing, but ended up overhearing a very loud conversation where one of the organizers was talking about his plans. The organizer had lots of acronyms that made sense to him but seemed like bafflegab to me. But if all the acronyms did whatever they were supposed to do, and a lot of handwaving took place, then, well, the revolution was inevitable.

Six years later, it’s hard to say what, if anything, Occupy accomplished except to fill the minds of a great many Millennials with political gas and fatten the paychecks of cops and sanitation workers who had to clean up the encampments. But there’s those who like to think that endless confrontations and screaming are key tools of political persuasion. So we now have the battle with the Standing Rock Sioux’s triumph over Big Oil at the Dakota Access Pipeline.

I’ll be the first to argue that American Indians have been treated badly in the past. But the past offers no help to Indians trying to rise up out of poverty. Naomi Schaefer Riley, a senior fellow at the Independent Women’s Forum and the author of a new book about American Indians, makes this provocative point in this article from Commentary: natural resources are the best way to ensure that Indians can rise out of poverty.

Riley gives an in-depth account of Energy Transfer Partners’ efforts to build the Dakota Access Pipeline. The company first proposed the pipeline in 2014. They managed to convince property owners to allow the company to build 97 percent of the pipeline on private land. “The many farmers who allowed the company to run across their property were paid handsomely,” Riley writes.

In December, the Army announced that construction would be halted until Energy Transfer Partners found a way around Lake Oahe. The Sioux and their green allies declared a great victory. But Riley notes that the real issue is how much control Indians have over their reservations—and whether they can develop the abundant natural resources on their land.

Radicals daydream that Indian reservations will someday become independent nations. A more desirable—and achievable—goal would be for Indians to have as many rights to their lands as private property owners have. Indian reservations, Riley reports, are micromanaged by the Bureau of Indian Affairs. Indians are routinely blocked by Washington bureaucrats from getting mortgages, buying or selling land, or engaging in other forms of productive economic activity.

Terry Anderson and Shawn Regan of the free-market environmental nonprofit PERC calculate that Indian reservations have $1.5 trillion in coal, uranium, oil, and gas on their land—enough to give every Indian living in a reservation west of the Mississippi $290,000. But Indians who want to develop these resources find that Bureau of Land Management (BLM) officials routinely block development requests because they consider reservations to be federal government property. Both the Navajo and the Crow tribes have denounced the BLM for denying them fracking permits. The proposed Bears Ears National Monument, which would encompass over a million acres in Utah, has been denounced by members of the Navajo, Ute, and Paiute tribes because they’d be blocked from farming and drilling for oil in lands that would be taken over by the government for the national monument.

Because the control Indians have over reservations is so ambiguous, Riley says, businesses are reluctant to deal with them. The end result of the Standing Rock Sioux protest, Riley observes, is that companies “will now be less likely to locate industry in an area where Indians could potentially see jobs or feel any economic boost.”

The first task philanthropists should have in dealing with American Indians is how to help them rise out of poverty. The best way to do that is to ensure that they have control over the abundant natural resources on their reservations.

American Indian reservations are not—and should not—be considered to be captive nations. But giving Indians the clear and unfettered rights to develop their land that other private property owners have would be a considerable improvement.

For related topics, read ‘Rockefellers’ war against oil and gas‘ and ‘The Climate Change Oligarchy.’ Or, pair this one with a recent article about Latin American indigenous groups at ‘Philanthropy and indigenous communities.’