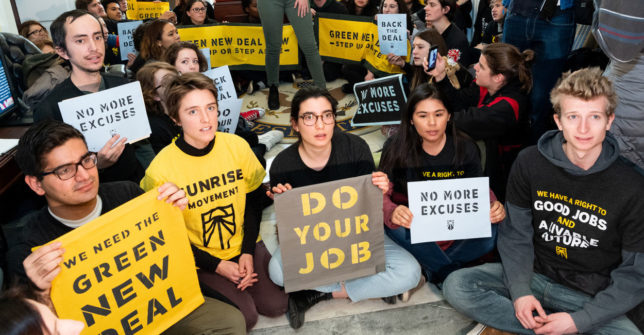 This article originally appeared in the Daily Signal on April 11, 2019.

A self-described army of young people devoted to climate change activism are taking their show on the road to build support for national Democrats’ Green New Deal and to counter business interests that favor fossil fuel use.

The Sunrise Movement first attracted media attention when hundreds of its followers organized sit-ins at congressional offices following the 2018 midterm elections. The movement’s network of activists is touted as including teenagers and college-age students and graduates.

In a widely reported encounter in February, elementary school children from San Francisco urged Sen. Dianne Feinstein, D-Calif., to support the Green New Deal. The Sunrise Movement posted a video of the spirited exchange, which also included middle and high school students, on its Facebook page.

Beginning April 18 in Boston, the environmental advocacy group will go on a speaking tour, called “Road to the Green New Deal,” that will visit nine major U.S. cities. The tour is set to conclude May 13 in Washington.

The group’s stated goal is to make the 2020 elections a referendum on climate change and to implement the hotly debated Green New Deal as policy in 2021.

“Sunrise hopes the media falls for its image of itself as a youth-led grassroots activism for the Green New Deal, springing up naturally,” Scott Walter, president of Capital Research Center, told The Daily Signal. “In fact, the group is a creature of the professional left.”

The Green New Deal has not yet been folded into a legislative proposal, but exists in the form of nonbinding resolutions before Congress.

On Feb. 7, Rep. Alexandria Ocasio-Cortez, D-N.Y., introduced House Resolution 109 while Sen. Ed Markey, D-Mass, introduced Senate Resolution 59. Both call for a “10-year national mobilization effort” to completely end the use of fossil fuels in the U.S. and transition the nation’s economy to so-called renewable energy sources.

The Sunrise Movement has an entire website devoted to the Green New Deal, including a strategy page that describes the major goals of the proposal. A total of 91 co-sponsors in the House and 12 in the Senate have signed up, according to the latest figures.

The feasibility of the Green New Deal has become a point of contention between climate change activists with the Sunrise Movement and elected officials in the Democratic Party.

Feinstein released a statement on the “small group of children, young adults, and parents from the Sunrise Movement” who encountered the California Democrat in her San Francisco office.

“Unfortunately, it was a brief meeting, but I want the children to know they were heard loud and clear,” she said.

Feinstein, a former mayor of San Francisco, has expressed opposition to the Green New Deal because she does not view it as affordable.

Nicolas Loris, an economist with The Heritage Foundation who focuses on energy and environmental issues, wrote a report that finds the Green New Deal would prove costly to taxpayers, consumers, and the economy. Loris co-authored a commentary with Kevin Dayaratna, a statistician with Heritage, that begins to calculate the costs of the Democrats’ proposal by 2040.

So did the youth advocacy group come together out of spontaneous enthusiasm for the Green New Deal?

Although the Sunrise Movement has been described as a “grassroots” group in favorable profiles appearing in Rolling Stone, The New Republic, and other liberal media outlets, it received critical financial and organizational support from some of the most well-funded, well-established environmental advocacy groups, according to the Capital Research Center, a Washington-based nonprofit that examines how foundations and charities spend money.

Prakash attended the University of Massachusetts Amherst, where she was a leader of the Fossil Fuel Student Divestment Network. Blazevic also worked on that campaign while attending Swarthmore College.

The students advocated that colleges and universities pull any investments from producers of coal, oil, and other fossil fuels.

The only nonstudent co-founder is Michael Dorsey, a former board member of the Sierra Club who served on the EPA’s National Advisory Board under President Barack Obama.

Dorsey became acquainted with Lichtash and Weber while he was a visiting professor at Wesleyan. The connection marked a key turning point as the professor and the two students worked together to secure a grant of $30,000 to craft an action plan for climate change that evolved into the Sunrise Movement Education Fund.

So where does the money come from for the upcoming speaking tour, as well as other Sunrise Movement initiatives aimed at advancing the Green New Deal?

The group rents office space from the Sierra Club in the nation’s capital, according to Influence Watch.

The Fossil Fuel Student Divestment campaign that drew in Prakash and Blazevic also shines light on the connection between Sunrise activists and some of the largest environmental advocacy groups.

The campaign originated at Swarthmore College, according to a 2015 reportfrom the National Association of Scholars, a network of academics and private citizens committed to academic freedom.

From there, the student divestment campaign grew with financial assistance from 350.org, a Brooklyn-based environmental advocacy group with a presence in 188 countries.

Influence Watch describes 350.org as holding an “uncompromising stand against oil, gas, and coal, the industry, and its leaders.” Bill McKibben, an environmental activist and former journalist, founded the organization in 2008.

Walter, the president of Capital Research Center, said in an interview with The Daily Signal that the Sunrise Movement’s close association with outfits such as Sierra Club and 350.org belies its claim to grassroots status.

The Sunrise Movement is listed as a member of the U.S. Climate Action Network.

“Sunrise rents office space from the Sierra Club, an advocacy group that spends over $107,000,000 a year,” Walter said, adding:

Sunrise is in the same building that houses the activist group U.S. Climate Action Network, which last year gave Sunrise an ‘Empowerment Grant’ of an unknown amount. Sunrise’s board of directors includes representatives from other well-heeled environmental groups including Michael Dorsey, a former Sierra Club national adviser, and Betamia Coronel, national organizer for the radical agitation group 350.org.

The Sunrise Movement held its first sit-in in November in partnership with Ocasio-Cortez, then an incoming congresswoman, at the offices of Rep. Nancy Pelosi, D-Calif., then the incoming House speaker.

Inside Philanthropy, in a published profile of the Sunrise groups, identifies the Wallace Global Fund, the Rockefeller Family Fund, and the Winslow Foundation as major backers of the organizations.

The Daily Signal last week sent a request for comment to the Sunrise Movement, asking whether its close association with environmental advocacy groups such as Sierra Club, 350.org, and U.S. Climate Action Network in any way compromises the group’s appeal as a grassroots organization that represents average Americans.

Stephen O’Hanlon, a spokesman for the Sunrise Movement, had not responded by publication time.

The Daily Signal also sought comment from the Sierra Club, 350.org, and U.S. Climate Action Network. None had responded by publication time.

The Sunrise Movement says on its website that public opinion is on the side of its policy stances. But Walter said he sees the group as advancing narrow special interests that are losing public support.

“The left specializes in creating networks of groups designed to look like they were born out of spontaneous civic activism,” Walter told The Daily Signal. “In reality, they’re often led by the same D.C. lobbyists and influencers pushing an unpopular agenda.”

On March 26, the Senate voted 57-0 against proceeding to debate on the Green New Deal, with most Democrats voting “present.” Sixty votes were needed to begin debate.

All 53 Senate Republicans voted against the nonbinding resolution. Three Democrats and one Independent who caucuses with the Democrats—Joe Manchin of West Virginia, Doug Jones of Alabama, Kyrsten Sinema of Arizona, and Angus King of Maine—also voted no.

Sen. Bernie Sanders, I-Vt., joined the other 42 Democrats in opting to vote “present.”