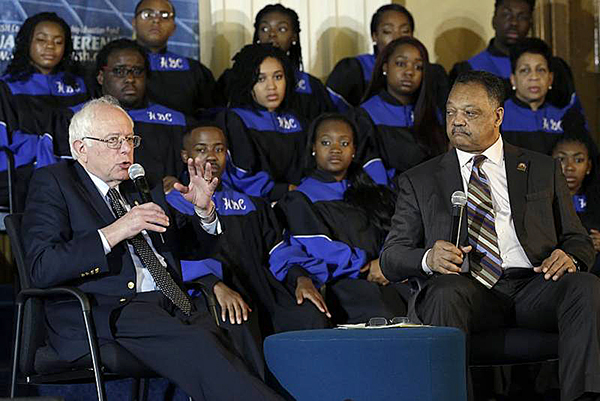 Indeed, Bernie has a good chance of riding to the head of the Democratic delegate pack when the votes start coming in. The lifelong leftist once known as the “Red Mayor in the Green Mountains” when he was the mayor of Burlington, Vermont, is raising more money from far more people than his Democratic rivals. The latest polling ahead of the February 3 Iowa Caucuses and the New Hampshire Primary eight days later show him functionally tied for a chance to win both states.

But the Democratic Socialists of America are overstating their case just a bit to say Sanders is the “only socialist in American history” to have a “serious” shot at the White House. If Bernie does take the lead in the Democratic presidential delegate count this year, he won’t even be the first DSA-endorsed candidate to pull off that accomplishment. That honor belongs to Jesse Jackson, who in 1988 briefly took the lead in the national delegate count after an impressive string of early victories, ahead of the eventual Democratic nominee, Massachusetts Gov. Michael Dukakis.

A comprehensive new profile of Jackson’s historic 1988 run for the White House and how it still reverberates in our politics today was recently posted at InfluenceWatch.org.

Jackson staked out positions well to the left of the other 1988 Democrats on taxes, social spending, abortion, health care, national defense, and more. His plan for a single-payer government-run health care system was even to the left of the plan advocated by 2016 Democratic presidential nominee Hillary Clinton and presaged the Medicare for All policy now promoted by Bernie Sanders.

Sanders—then the mayor of Burlington—was so taken with the agenda that he endorsed Jackson, stating it was the “the most significant presidential campaign in at least 50 years.” (This was an unusual stand for Sanders: A self-described socialist he has run as an independent candidate rather than as a member of the Democratic Party in every race except in his runs for the White House).

While the Jackson campaign welcomed Sanders’s endorsement, accepting the nod from the DSA was more controversial. Politically cautious Jackson campaign staffers initially tried to reject the leftist DSA endorsement but were overruled by the candidate himself. “I didn’t feel the need to run from the word, ‘socialist,’ or run to the word, ‘capitalist,’” said Jackson, explaining his decision decades later.

Jackson didn’t win the Democratic nomination in 1988, but he finished a strong second with almost 7 million votes and 29 percent of the total votes cast in a race that featured five Democrats with more than 1 million votes. Although Dukakis won the Democratic nomination, he went on to take just 111 of 538 electoral votes against Republican Vice President George H.W. Bush in the 1988 general election.

The Jackson campaign’s effect on the long-term ideological trajectory of the Democratic Party eclipsed the 1988 contribution of Dukakis. Jackson’s impact was recognized even in the immediate aftermath of the race, with President-elect Bush choosing to meet publicly with the surprisingly successful socialist-endorsed Democrat two days before giving the same audience to Dukakis.