Behind Trump’s philanthropy, or lack thereof 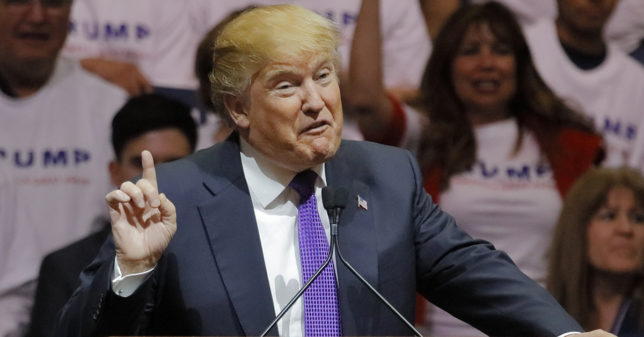 Like most newspapers, the Washington Post does not have any reporter whose beat is philanthropy—until this year, when David A. Fahrenthold became the Donald Trump philanthropy reporter.

In an interview with the Washington Post’s Chris Cilizza, Fahrenthold said that the Post’s executive editor, Martin Baron, “stopped me in the elevator one (primary) debate night and suggested we look into the Trump Foundation specifically. I also became interested in researching Trump’s broader history of charity. If this was how he would act under the microscope of a presidential campaign, how had he acted in past years, back when nobody was looking?”

Baron was right to assign Fahrenthold to this beat. Trump has repeatedly boasted how generous he is. It appears that generosity is part of Trump’s brand. Moreover, it’s the responsibility of the press to thoroughly vet every major candidate.

I’ve looked at Fahrenthold’s reporting. If he were a baseball player, he would have scored a grand slam, a single, and a lot of foul balls.

Let’s look at what Fahrenthold has discovered.

For example, in October 2015 he was introduced at a rally at the Treasure Island casino in Las Vegas where the casino’s owner, Phil Ruffin, announced that Trump had made a $20 million gift to St. Jude’s Children’s Research Hospital. Trump stood and smiled and accepted the applause of the crowd.

Fahrenthold looked into the matter. A spokesman for the hospital said they had not announced a gift and it was their policy (which is the correct one) not to disclose their donors. There is no other evidence that such a donation was ever made.

By contrast, St. Jude’s announced that a wing of the hospital would be named after Eric Trump after he agreed to give the hospital $20 million—over ten years. The Eric Trump Foundation has long been a donor to St. Jude’s.[1]

The explanation offered by Trump Organization senior vice president Jeffrey McConney is both ludicrous and plausible. They say an underling was authorized to cut both Donald Trump’s personal checks and Donald J. Trump Foundation ones, with the rule that if the clerk found an organization listed in some sort of “book of official charities” (which wasn’t specified) the check was supposed to be made by the Trump Foundation. The Trump Foundation reported a donation to a group with a name similar to “And Justice for All” in Colorado, but the Colorado group never received the money.

I accept the statements of Trump Organization spokesmen that this donation was a screw-up rather than a deliberate attempt to violate the law. But nonetheless this affair is newsworthy and should be public knowledge.

Apparently, the law is that if you receive a fee for your services and direct that the fee is paid to charity, you have to pay income tax on the fee.

These decisions apparently violate the laws against self-dealing. (I’m qualifying this sentence because I’m not a lawyer, and no one has been charged.) The press had more fun with another case, where Trump paid $10,000 at a charity auction for a portrait by a “speed painter,” and kept it. A reporter for Univision found the portrait in the bar of the Trump National Doral golf club.

Trump spokesman Boris Epshteyn told MSNBC that Trump was “storing” the painting in the hotel bar. Here we must side with the Trumps. After all, many people crave “safe spaces” where they can walk around, enjoy life, and not encounter a giant portrait of Donald Trump. Given that last spring some college students had a case of the conniptions because some naughty person scrawled “Trump” in chalk on the campus sidewalks, one wonders what fits these students would undergo when faced with a portrait of the man.

I thought the most telling quote in Fahrenthold’s piece was from Pace University emeritus professor James J. Fishman, who said that Trump was “a billionaire who acts like a thousandaire” because the clerical errors his foundation made were similar to small family foundations with limited resources for accountants. “You wouldn’t expect somebody who’s supposed to be sophisticated, and who brags about his business prowess, should run his foundation like this,” Fishman said.

Moreover, The Smoking Gun had much of the story years before anyone else. As early as 2004, theyposted 990s to show that the Trump Foundation wasn’t very large. In 2011, they posted documents from the Trump Foundation’s 2009 and 2010 990s to show that Trump had stopped contributing to his foundation in 2008 and that most of the contributions to the foundation were made by other people, such as World Wrestling Entertainment heads Vince and Linda McMahon [2].

Given the Smoking Gun’s reporting, I wonder why the discovery that the Trump Foundation didn’t fill out their New York State paperwork in 2016. Why didn’t some industrious bureaucrat, fortifying himself during a coffee break with vital celebrity news, see the Smoking Gun story and checked the files? Why did this story sit for five years, given that most of it was easily available in 2011?

[1] Everything I have read suggests that Eric Trump has been a responsible donor. My criticisms of the Donald J. Trump Foundation do not apply to Eric Trump.