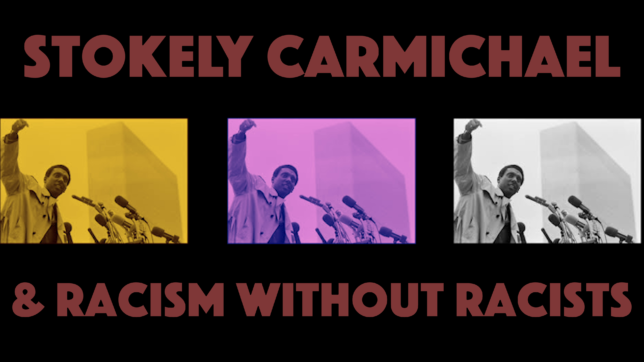 The Architects of Woke will release episodes throughout 2019. The series takes aim at far-left post-modernist and Marxist thinkers and activists responsible for the spread of identity politics from college campuses to society at large.

The fourth episode, “Stokely Carmichael & Racism Without Racists”, covers the influence of the late Stokely Carmichael, a.k.a. Kwame Ture. Carmichael was one of the leading activists of the civil rights movement, but put himself in direct opposition to the non-violent unifying ideas of Martin Luther King, Jr. A Marxist-Leninist, Carmichael eventually left America to pursue his dream of creating a pan-African communist black ethnostate, befriending murderous dictators in the process. But before he left, in his book Black Power he coined the term “institutional racism”, a term that has changed the course of race activist ever since. Under Carmichael’s definition of “institutional racism”, one only needs to find disparate outcomes by race to prove racism, there need not be racists found who created to that outcome. Since outcomes between any two measured groups are unlikely to ever be perfectly equal, Carmichael’s “institutional racism” has helped prevent the achievement of Martin Luther King, Jr.’s dream of abolishing the racial categories that divide us…

To learn more about Stokely Carmichael, check out the following links:
The Tragedy of Stokely Carmichael – http://www.davidgarrow.com/wp-content/uploads/2015/06/DJG2015RAHStokely.pdf
Black Power: The Politics of Liberation by Stokely Carmichael and Charles Hamilton – https://mygaryislike.files.wordpress.com/2016/12/black-power-kwame-ture-and-charles-hamilton.pdf

The Architects of Woke is hosted and directed by filmmaker Rob Montz. Montz is the co-founder and CEO of Good Kid Productions. His online documentary work has attracted millions of views and coverage in major outlets, including The Economist, USA Today, the New York Times, the Washington Post, and The Adam Carolla Podcast. His 2017 documentary “Silence U. PT 2: What Has Yale Become?,” published on We the Internet TV, won the 2018 Reason Video Prize.

You can view previous episodes of the Architects of Woke at the following links:
Judith Butler’s War on Science: https://youtu.be/yus0cmyRZWM
Slavoj Žižek & the Romance of Revolutionary Terror: https://youtu.be/mcS7jggHGCI
Chapo Trap House & the Marxist Vanguards for Alienated Millennials: https://youtu.be/l4knok5jf4Q