Anti-Bailout Movie ‘Atlas Shrugged’ May Be on Its Way

At long last Ayn Rand’s opus, Atlas Shrugged, may be turned into a movie, according to riskybusinessblog:

Hollywood could soon be going Objectivist.

After decades in development hell, Ayn Rand’s capitalism-minded “Atlas Shrugged” is taking new steps toward the big screen — with one of the film world’s most prominent money men potentially at its center.

Ryan Kavanaugh’s Relativity Media is circling the Baldwin Entertainment project and could come aboard to finance with Lionsgate, which got involved several years ago.

Rand’s popular but polarizing book — it’s derided by many literary critics but has a huge public following — tells the story of Dagny Taggart, a railroad executive trying to keep her corporation competitive in the face of what she perceives as a lack of innovation and individual responsibility.

A number of stars have expressed serious interest in playing the lead role of Taggart. Angelina Jolie previously had been reported as a candidate to play the strong female character, but the list is growing and now includes Charlize Theron, Julia Roberts and Anne Hathaway.

Although it was written a half-century ago, producers say that the book’s themes of individualism resonate in the era of Obama, government bailouts and stimulus packages — making this the perfect moment to bring the 1,100-page novel to the big screen.

“This couldn’t be more timely,” said Karen Baldwin, who along with husband Howard is producing, with film industry consultant John Logigian advising on the project. “It’s uncanny what Rand was able to predict — about the only things she didn’t anticipate are cell phones and the Internet.” Baldwin may be on to something — love it or hate it, “Shrugged” is seeing a resurgence, with book sales spiking as debates rage in Washington and around the country about the government’s role in a faltering free-market economy.

The author’s final novel offers an embattled railroad company as a metaphor for a society that Taggart (and Rand) sees as succumbing to socialism at the expense of individual creativity. Its backbone is a 50-page speech by the mysterious but major character John Galt in which he lays out the Rand principles of Objectivism, which argues for an aggressive free market and against government activism. Let’s just say it’s probably not on the president’s nightstand. […] 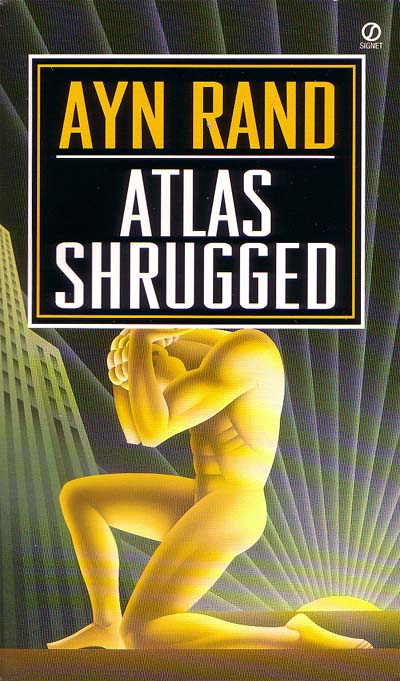