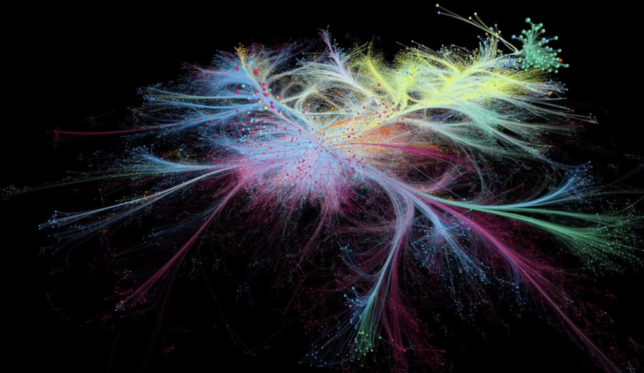 “A network of science: 150 years of ‘Nature’ papers” (YouTube)
by Michael E. Hartmann

Four researchers wrote a fascinating Science Advances article in 2017 about “theories of knowledge development” that offer “different answers to the questions about where,” chronologically speaking, “one will find the most fruitful information.” In other words, should one search for old or new sources of knowledge if trying to make a breakthrough?

“One school of thought argues that older work, benefiting from the test of time, is most likely to provide the building blocks of new work, an idea reflected in Isaac Newton’s famous remark, ‘If I have seen further than others, it is by standing upon the shoulders of giants,’” according to Satyam Mukherjee, Daniel M. Romero, Ben Jones, and Brian Uzzi.

“By contrast, Robert Merton’s births of time theory suggests that recent information drives breakthrough ideas,” they continue. Cognitively, people turn to the new first. The information age, and the technology driving it, emphasize novelty. Information-retrieval systems rank the recent, along with the popular, more highly than older knowledge. Newness correlates with advancement, according to the theory.

To help determine where breakthroughs in knowledge come from, the researchers examined citations in all 28,426,345 papers in the humongous Web of Science citation-indexing service from 1945 to 2013, as well as all 5,382,833 patents granted in the United States from 1950 to 2010. Then they defined papers and patents with the highest impact as those that yielded the top five percent of citations in their field.

1.)        the highest-impact papers and patents themselves cite literature the average age of which is low (i.e., it’s relatively new knowledge); but, …

In this second finding, you see the metaphorical shoulders on which Newtown stood. As the researchers put it, high-impact papers and patents are lodged “in a citation ‘hotspot.’” The hotspot is nearer to the shoulders on which we stand than the new to which we’re so drawn. It respects the past more.

The concept is applicable in some other contexts, they found—though they didn’t look at the philanthropic context. If it does apply in philanthropy, as we theorized in HistPhil, then grantmakers trying to make a breakthrough should respect the past more, too.

The 150th-anniversary issue of Nature magazine last month, with an accompanying video and interactive online feature, all amazingly visualize the same idea. (Hat tip to Farnam Street’s Shane Parrish, who cited the video in a recent newsletter.) The just-more-than-five-minute video was produced by Noah Baker, and the interactive feature was designed by Alice Grishchenko and Mauro Martino. They are actually quite dazzling. Check them out.

Referring to the image at the top of this article, the narrator begins the video by saying, “This is Nature’s publication record.” More than 88,000 papers published by Nature since 1900 are each represented by a dot, representatively colored by subject matter. Two papers are linked if another paper cites both of them; the dot size reflects the number of these co-citation links. The complex network reveals the relationships between papers, Nature notes, and captures the multidisciplinary scope of the journal.

“Every discovery is built on the work which precedes it and then in turn forms the foundations of the discoveries of the future and we can see that, too,” the video continues. “Every paper has its own story, its own unique network, and each of those networks connects to others to form a whole—every paper in every field playing their part in the global process of research and discovery.”

The shoulders on which Newton stood, beautifully visualized.

In grantmaking, if the idea applies, Newton- and Nature-like respect for the past might yield benefit, perhaps including in non-scientific pursuits. From whatever philanthropic worldview, such an appreciation would require a humility not currently in vogue, it seems, and always difficult to maintain for any giver. It would mean more adherence to donor intent. It would mean more learning of and acting upon history, generally and of a grantmaking institution in particular, which can be difficult. Keep old people around; read more, including books on the remaindered table, or whatever the online equivalent is.

It would mean less of a programmatic search for the merely trendy, for “what’s new,” which can be easy. It would mean less, and less-confident, “presentism”—the belief that we the living, with our updated knowledge and mores, know better or somehow possess more wisdom than those who preceded us.

Visually, it would mean less of this.