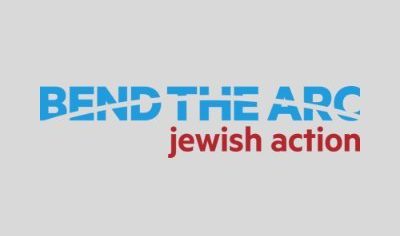 Swift recently criticized the “Soros family” for its involvement in her very public and very confusing dispute with Scooter Braun and Big Machine Records. According to Swift, the Soros family financially aided Braun in buying the rights to her music. Swift mentioned by name Alex Soros, the son of billionaire left-wing financier George Soros. The Instagram story reads:

Hey guys – I want to thank my fans for making me aware that my former record label is putting out an ‘album’ of live performances of mine tonight. This recording is from a 2008 radio show performance I did when I was 18. Big Machine has listed the date as a 2017 release but they’re actually releasing it tonight at midnight.

I’m always honest with you guys about this stuff so I just wanted to tell you that this release is not approved by me. It looks to me like Scooter Braun and his financial backers, 23 Capital, Alex Soros and the Soros family and The Carlyle Group have seen the latest balance sheets and realized that paying $330 MILLION for my music wasn’t exactly a wise choice and they need money

In my opinion…Just another case of shameless greed in the time of Coronavirus. So tasteless, but very transparent. [Emojis omitted]

Bend the Arc: Jewish Action Comes to the Rescue

Although the Instagram story was clearly inside-baseball regarding the music industry, Bend the Arc: Jewish Action took offense at Swift’s characterization of the Soros family and the use of the phrase “shameless greed.” In a tweet, Bend the Arc asked Swift to “PLEASE” not share “antisemitic conspiracy theories about the Soros family” and claimed that “Shameless greed” is a phrase used to smear Jews: 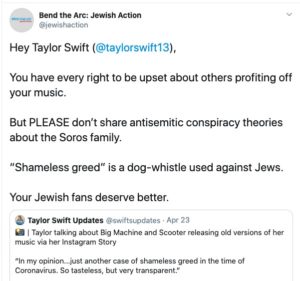 Some publications covering the Swift controversy, however, have minimized Alex Soros’s involvement in Bend the Arc: Jewish Action, saying he is only “closely involved” with the group.

Swift’s recent tweet was not the first time she has publicly criticized the Soros family. Last year, when accepting the Woman of the Decade Award at the Billboard Women in Music event, Swift said she was “told” that the Soros family funded Braun buying her music catalog.

To Bend the Arc: Jewish Action, both Taylor Swift and the Republican Party are causes of anti-Semitism.